Let us consider the packing of fruits for display in fruit stalls. They are in a closest packed arrangement as shown in the following fig we can extend this analogy to visualize the packing of constituents (atoms/ions/ molecules) in crystals, by treating them as hard spheres.

To maximize the attractive forces between the constituents, they generally tend to pack together as close as possible to each other. In this portion we discuss how to pack identical spheres to create cubic and hexagonal unit cell. Before moving on to these three dimensional arrangements, let us first consider the two dimensional arrangement of spheres for better understanding.

Linear Arrangement of Spheres in One Direction:

In a specific direction, there is only one possibility to arrange the spheres in one direction as shown in the fig. in this arrangement each sphere is in contact with two neighbouring spheres on either side.

Two dimensional planar packing can be done in the following two different ways. 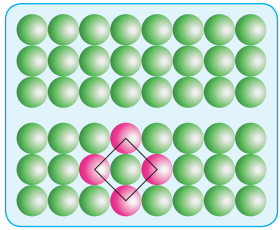 Linear arrangement of spheres in one direction is repeated in two dimension i.e., more number of rows can be generated identical to the one dimensional arrangement such that all spheres of different rows align vertically as well as horizontally as shown in the fig.

If we denote the first row as A type arrangement, then the above mentioned packing is called AAA type, because all rows are identical as the first one. In this arrangement each sphere is in contact with four of its neighbours.

In this arrangement each sphere is in contact with 6 of its neighbouring spheres. On comparing these two arrangements (AAAA…type and ABAB….type) we found that the closest arrangement is ABAB…type. 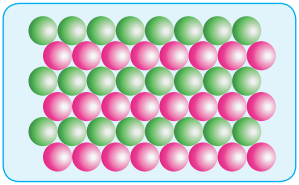 All spheres of different layers of crystal are perfectly aligned horizontally and also vertically, so that any unit cell of such arrangement as simple cubic structure as shown in fig. In simple cubic packing, each sphere is in contact with 6 neighbouring spheres Four in its own layer, one above and one below and hence the coordination number of the sphere in simple cubic arrangement is 6. 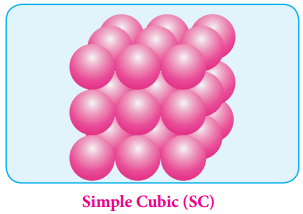 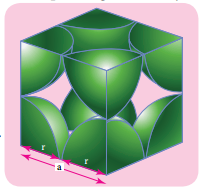 i.e., only 52.38% of the available volume is occupied by the spheres in simple cubic packing, making inefficient use of available space and hence minimizing the attractive forces. 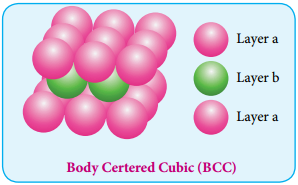 Here, the spheres are touching along the leading diagonal of the cube as shown in the fig. 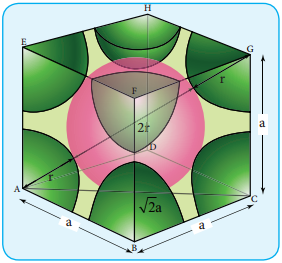 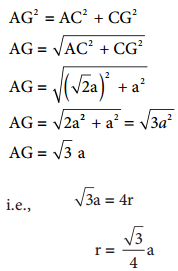 ∴ Volume of the sphere with radius ‘r’ 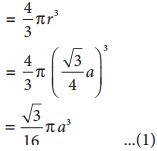 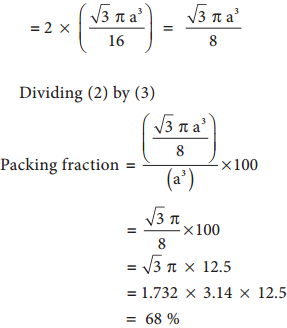 i.e., 68 % of the available volume is occupied. The available space is used more efficiently than in simple cubic packing. 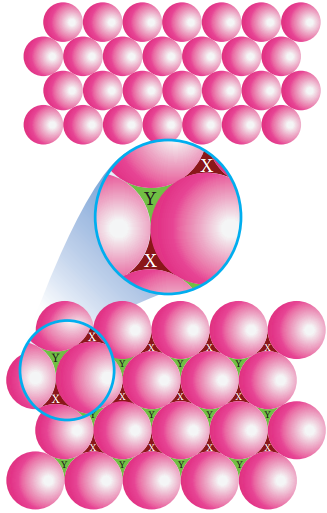 Wherever a sphere of second layer (b) is above the void (x) of the first layer (a), a tetrahedral void is formed. This constitutes four spheres – three in the lower (a) and one in the upper layer (b). When the centers of these four spheres are joined, a tetrahedron is formed.

At the same time, the voids (y) in the first layer (a) are partially covered by the spheres of layer (b), now such a void in (a) is called a octahedral void. This constitutes six spheres – three in the lower layer (a) and three in the upper layer (b).

When the centers of these six spheres are joined, an octahedron is formed. Simultaneously new tetrahedral voids (or holes) are also created by three spheres in second layer (b) and one sphere of first layer (a). 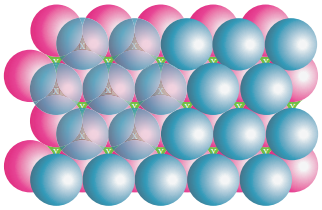 The spheres can be arranged so as to fit into the depression in such a way that the third layer is directly over a first layer as shown in the figure. This “aba’’ arrangement is known as the hexagonal close packed (hcp) arrangement. In this arrangement, the tetrahedral voids of the second layer are covered by the spheres of the third layer. The cubic close packing is based on the face centered cubic unit cell. Let us calculate the packing efficiency in fcc unit cell. 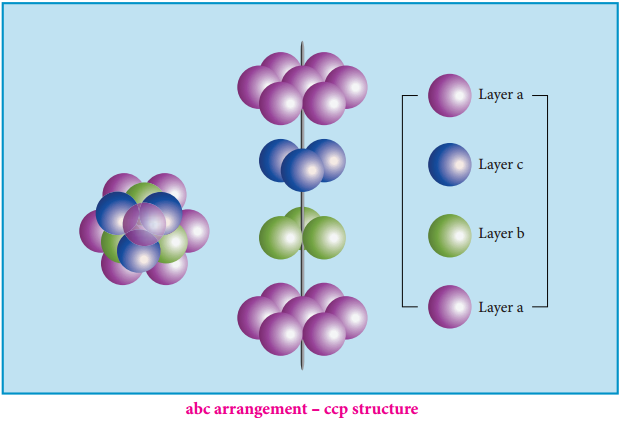 The structure of an ionic compound depends upon the stoichiometry and the size of the ions.generally in ionic crystals the bigger anions are present in the close packed arrangements and the cations occupy the voids. 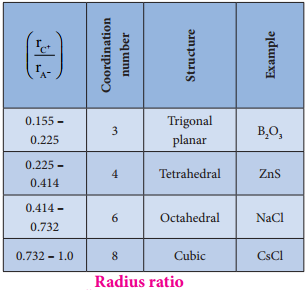