Question 1.
Choose the right answer from the four alternatives given below.

(i) Which one of the following describes the drainage patterns resembling the branches of a tree?
(a) Radial
(b) Dendritic
(c) Centrifugal
(d) Trellis
ans.
(b) Dendritic pattern.

(iii) The river Narmada has its source at
(a) Satpura
(b) Brahmagiri
(c) Amarkantak
(d) Slopes of Western Ghats
Ans.
(c) Amarkantak

(iv) Which one of the following lakes is a salt water lake?
(a) Sambhar
(b) Dal
(c) Wular
(d) Gobind Sagar
Ans.
(a) Sambhar lake

(v) Which one of the following is the longest river of the Peninsular India?
(a) Narmada
(b) Krishna
(c) Godavari
(d) Mahanadi
Ans.
(c) Godavari river

(vi) Which one amongst the following rivers flows through a rift valley?
(a) Mahanadi
(b) Thngabhadra
(c) Krishna
(d) Tapi
Ans.
(d) Tapi river

(i) What is meant by a water divide? Give an example.
Ans. Water divide is an elevated area, such as a mountain or an upland, that separates two drainage basins. For example, the water divide between the Indus and the Ganga river system is Ambala.

(iii) Where do the rivers Indus and Ganga have their origin?
Ans. The river Indus has its origin in Tibet, near Mansarowar lake. The Ganga river originates at the Gangotri Glacier on the sourthern slopes of the Himalayas.

Question 4.
Discuss the significant difference between the Himalayan and the Peninsular rivers.
Answer:

Question 5.
Compare the east-flowing and the west-flowing rivers of the Peninsular plateau.
Answer: 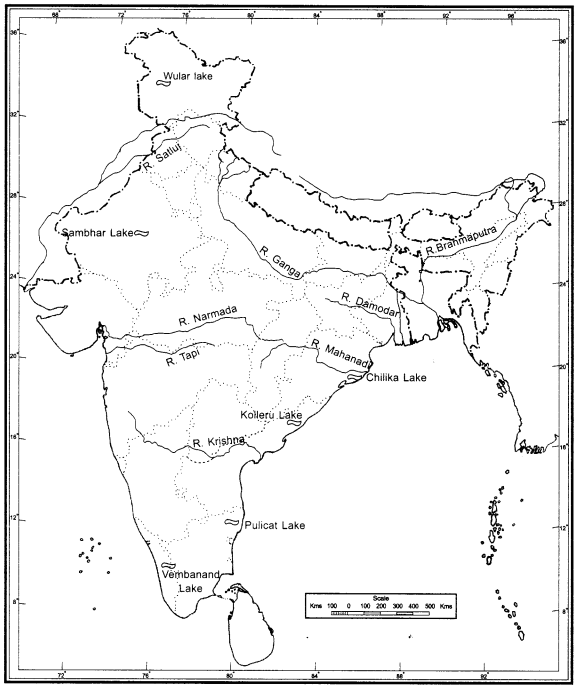 Hope given NCERT Solutions for Class 9 Social Science Geography Chapter 3 are helpful to complete your homework.