Question 1.
Choose the right answer from the four alternatives given below:

(i) A landmass bounded by sea on three sides is referred to as
(a) Coast
(b) Island
(c) Peninsula
(d) None of the above
Ans. (c) Peninsula

(ii) Mountain ranges in the eastern part of India forming its boundary with Myanmar are collectivity called
(a) Himachal
(b) Uttarakhand
(c) Purvachal
(d) None of the above
Ans. (c) Purvachal

(ii) Which continents of today were part of the Gondwana land?
Ans. The continents are South America, South Africa, Australia and Antarctica.

(iii) What is the bhabar?
Ans. Bhabar is a narrow belt of the Ganga plain covered with pebbles lies along the foothills of the Shiwaliks.

Question 4.
Describe how the Himalayas were formed.
Answer:
(a) The oldest landmass of India (i.e. Peninsular part) was a part of Gondwana land, which included India, Australia, South Africa and South America as one single landmass.
(b) Convectional currents split the earth’s crust into’a number of fragments, thereby leading to the drifting of the Indo – Australian plate towards the north after being separated from Gondwana land.
(c) The northward drift resulted in the collision of this plate with much larger Eurasian plate.
(d) Due to this collision, the sedimentary rocks which were accumulated in the geosyncline called the Tethys, were folded to form the mountain systems of west Asia and Himalayas.
(e) The Himalayas represent a youthful topography with high peaks, deep valleys and fast-flowing rivers.

Question 6.
Give an account of the Northern Plains of India.
Answer:

(a) The Indian Desert
Ans. (a) The Indian desert lies to the west of the Aravali hills. It is an uneven sandy plain covered with sand dunes.
(b) Barchans (crescent-shaped sand dunes) cover a larger part of the desert. Near the Indo-Pakistan border, longitudinal sand dunes are more common.
(c) It has arid climate with scarce vegetation and rainfall below 150 mm per year.
(d) Rivers/streams appear only during the rainy season and soon afterward disappear in the sand. They do not have enough water to reach the sea. JRiver Luni is the only large river in this area.

(c) The Island Groups of India
Ans. India has two groups of islands namely:
(a) Lakshadweep Islands
(b) Andaman and Nicobar islands group

Lakshadweep Islands:
(a) These island groups are located in the Arabian Sea i.e., west of Malabar coast of Kerala.
(b) These islands are of coral origin formed by deposition of the dead remains,
(c) The total area of islands are 32 sq km. In Lakshadweep, administrative headquarters is in Kavaratti islands.
(d) They have a wide diversity of flora and fauna. The Pitti island, an uninhabited island has a bird sanctuaiy.

Andaman and Nicobar Island:
(a) These islands are located in the Bay of Bengal are the raised portion of the submerged mountain ranges projecting out of the sea water.
(b) Large in size and are more numerous. Some of them are of volcanic origin e.g. Barren island the only active volcano,
(c) These islands are of strategic importance as it lies very close to south-east Asia,
(d) The capital city is Port Blair,
(e) Experience equatorial climate and has thick forest cover.

Question 8.
On an outline map of India show the following.
(i) Mountain and hill ranges – the Karakoram, the Zaskar, the Patkai Bum, the Jaintia, the Vindhya range, the Aravali and the Cardamom hills.
(ii) Peaks – K2, Kanchenjunga, Nanga Parbat and Anai Mudi.
(iii) Plateaus – Chotanagpur and Malwa
(iv) The Indian Desert, Western Ghats, Lakshadweep Islands.
Answer: 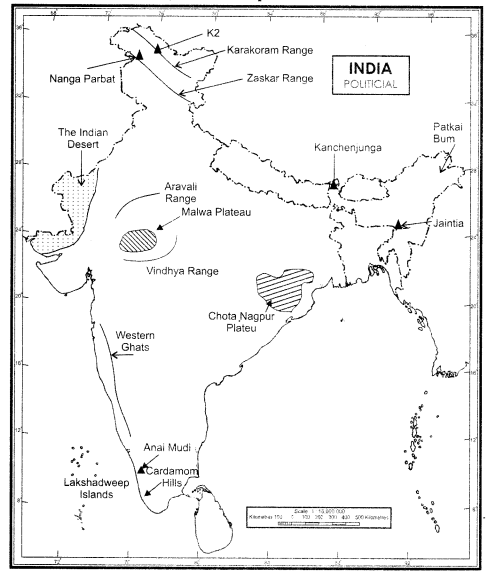