Question 2.
When do we say that work is done ? (CBSE 2012)
Answer:
Work is done, when force acts on an object and the object is displaced from its initial position.

Question 3.
Write an expression for the work done when a force is acting on an object in the direction of its displacement.
Answer:
W = FS 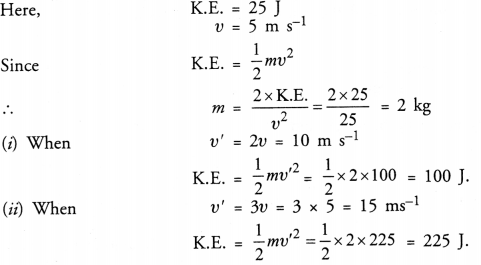 Question 9.
What is power ?
Answer:
Power is defined as the rate of doing work.

Question 10.
Define 1 Watt of power.
Define SI unit of power.
Answer:
Power of an agent is said to be 1 watt if it does 1 joule work in 1 second.

Question 12.
Define average power.
Answer:
Average power is defined as the ratio of total work done by an agent to the total time taken.

Question 3.
A battery lights a bulb. Describe the energy change involved in the process. (CBSE 2012)
Answer:
The chemical energy of the battery changes into electrical energy which is then converted into light energy and heat energy.

Question 5.
A mass of 10 kg is at a point A on a table. It is moved to a point B which is at a distance of 2 m from A.
If the line joining A and B is horizontal, what is the work done on the object by the gravitational force ? Explain your answer. (CBSE 2012)
Answer:
Work done by the gravitational force = mgh
Since h = 0 (because both points A and B are at the same height.)
∴ Work done = 0.

Question 7.
What are the various energy transformations that occur when you are riding a bicycle ?
Answer:
Our muscular energy is converted into the kinetic energy of the bicycle.

Question 8.
Does the transfer of energy takes place when you push a huge rock with all your might and fail to move it ? Where is the energy you spend going ?
Answer:
When we push a huge rock, the rock also exerts a huge force on us. The muscular energy spent by us is used to oppose the huge force acting on us due to the rock.

Question 9.
A certain household has consumed 250 units of energy during a month. How much energy is this in joules ?
Answer:

Question 10.
An object of mass 40 kg is raised to a height of 5 m above the ground. What is its potential energy ? If the object is allowed to fall, find its kinetic energy when it is half-way down. (CBSE 2011)
Answer:

Question 11.
What is the work done by the force of gravity on a satellite moving round the earth ? Justify your answer. (CBSE 2012) 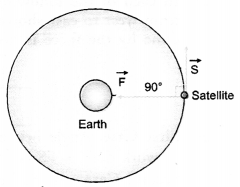 Question 12.
Can there be displacement of an object in the absence of any force acting on it ?
Answer:
Yes, When an object moves with a constant velocity, then no force acts on the object. However, the object is displaced from one position to another position.

Question 13.
A person holds a bundle of hay over his head for 30 minutes and gets tired. Has he done some work or not? Justify your answer. (CBSE 2011, 2012)
Answer:
Work = Force x Displacement.
Since the person is at rest, so displacement = 0.
Hence no work is done by the person.

Question 16.
An object of mass m is moving with a constant velocity v. How much work should be done on the object in order to bring the object to rest ? (CBSE 2012)
Answer:

Question 18.
In each of the following, a force F is acting on an object of mass, m. The direction of displacement is from west to east shown by the longer arrow. Observe the diagrams carefully and state whether the work done by the force is negative, positive or zero. (CBSE 2011)

Question 21.
A freely falling object eventually stops on reaching the ground. What happens to its kinetic energy ?
(CBSE 2011)
Answer:
Kinetic energy is converted into sound energy and heat energy.

Download the free PDF of Chapter 11 Work and Energy or save the solution images and take the print out to keep it handy for your exam preparation.

Hope given NCERT Solutions for Class 9 Science Chapter 11 are helpful to complete your science homework.