Question 2.
Write the formula to find the magnitude of the gravitational force between the earth and an object on
the surface of the earth. (CBSE 2011, 2012, 2013)
Answer:

Question 3.
What do you mean by free fall ?

Question 6.
Why is the weight of an object on the moon 1/6 th its weight on the earth ?
Answer:

Question 7.
You find your mass to be 42 kg on a weighing machine. Is your mass more or less than 42 kg ?
Answer:
Weighing machine gives the weight of an object.
Weight = Mass x g

Thus, mass is less than the weight.

Question 1.
How does the force of gravitation between two objects change when the distance between them is reduced to half ? (CBSE 2011)
Answer:

Thus, the force of gravitation becomes 4 times its original value.

Question 2.
Gravitational force acts on all objects in proportion to their masses. Why, then, a heavy object does not fall faster than a light object ? (CBSE 2015)
Answer:
The acceleration with which a body falls towards the earth is constant (= 9.8 m s-2) and independent of the mass of the body. Thus, all bodies fall with the same acceleration irrespective of their masses. That is why, a heavy body does not fall faster than the light body.

Question 3.
What is the magnitude of the gravitational force between the earth and a 1 kg object on its surface ?Mass of the earth is 6 x 1024 kg and radius of earth is 6.4 x 106 m.
Answer:

Question 6.
What happens to the force between two objects, if

Question 7.
What is the importance of universal law of gravitation ?
Answer:
The gravitational force plays an important role in nature

Question 9.
What do we call the gravitational force between the earth and an object ?
Answer:
Force of gravity.

What is the weight in newtons of a 10 kg object on the moon and on the earth ?
Answer:

The ball takes the same time to reach the ground from maximum height as time of ascent is equal to time of desent.
Total time taken = 5 s + 5 s = 10 s.

(ii) The stone after reaching the maximum height falls down and reach the ground.
∴ Displacement of the stone = 0
and distance covered by the stone = 80 m + 80 m = 160 m.

Question 17.
A stone is allowed to fall from the top of a tower 100 m high and at the same time another stone is projected vertically upwards from the ground with a velocity of 25 m/s. Calculate when and where the two stones will meet ?
Answer:
Let t = time after which both stones meet .
S = distance of the stone dropped from the top of tower
(100 – S) = distance travelled by the projected stone.

Question 18.
A ball thrown up vertically returns to the thrower after 6 s. Find
(a) the velocity with which it was thrown up,
(b) the maximum height it reaches, and
(c) its position after 4 s. (CBSE 2011)
Answer: 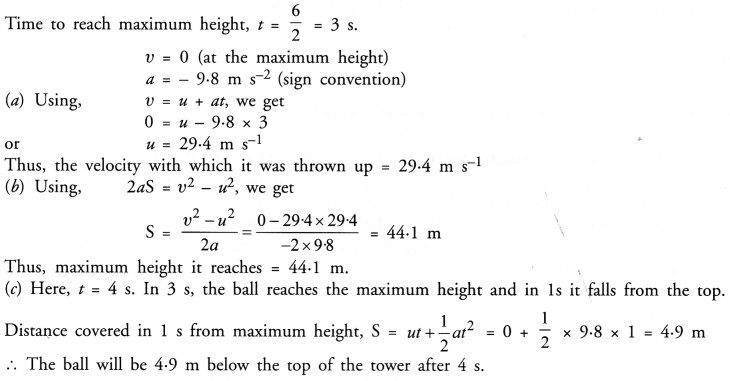 Download the free PDF of Chapter 10 Gravitation or save the solution images and take the print out to keep it handy for your exam preparation.

Hope given NCERT Solutions for Class 9 Science Chapter 10 are helpful to complete your science homework.