Question 1.
What is the work of the police?
Answer:

Question 3.
What is the work of a tehsildar?
Answer:
The tehsildars are the revenue officers working under the District Collector. The work of the tehsildar is

Question 4.
What issue is the poem trying to raise? Do you think this is an important issue? Why?
Answer:

Question 8.
How do women benefit under the new law?
Answer:
Under the new law, women are benefited in the way that they inherit the property of their father equally with their brothers and mother.

Question 9.
In your neighbourhood are there women who own property? How did they acquire it?
Answer:
The property can be acquired in the following ways:

Question 1.
A Quarrel in the Village:
Mohan is a farmer. His family owns a small agricultural field, which they have been farming for many years. Next to his field is Raghu’s land which is separated from his by a small boundary called a bund.

One morning Mohan noticed that Raghu had shifted the bund by a few feet. By doing so, he had managed to take over some of Mohan’s land and increased the size of his own field. Mohan was angry but also a little frightened. Raghu’s family-owned many fields and besides, his uncle was also the Sarpanch of the village. But even so, he plucked up courage and went ” to Raghu’s house.

A heated argument followed. Raghu refused to accept that he had moved the bund. He called one of his helpers and they began shouting at Mohan and beating him up. The neighbours heard the commotion and rushed to the spot where Mohan was being beaten up. They took him away.

He was badly hurt on his head r and hand. He was given first aid by one of his neighbors. His friend, who also ran the village post-office, suggested that they go to the local police station and file a report. Others were doubtful if this was a good idea because they felt they would waste a lot of money and nothing would come out of it. Some people said that Raghu’s family would have already contacted the police station.

After much discussion, it was decided that Mohan would go to the police station along with some of the neighbours who had seen the incident. 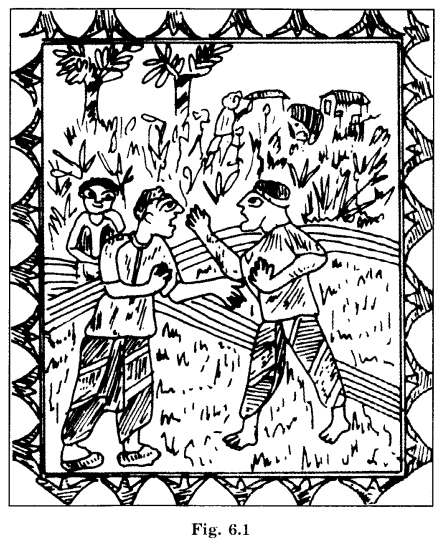 Area of the Police Station:
On the way to the police station, one of the neighbours asked, “Why don’t we spend some more money and go to the main police station in the town?”
“It is not a question of money. We can register the case only in this police station because our village comes in its area of work,” explained Mohan.

Every police station has an area that comes under its control. All persons in that area can report cases or inform the police about any theft, accident, injury, fight, etc. It is the responsibility of the police of that station to enquire, investigate and take action on the cases within its area.

Question 2.
When they reached the police station Mohan went to the person-in-charge (Station House Officer or S.H.O.) and told him what had happened. He also said that he wanted to give the complaint in writing. The S.H.O. rudely brushed him aside saying that he couldn’t be bothered to waste his time writing down minor complaints and then investigating them. Mohan showed him his injuries but the S.H.O. did not believe him.

Mohan was puzzled and did not know what to do. He was not sure why his complaint was not being recorded. He went and called his neighbours into the office. 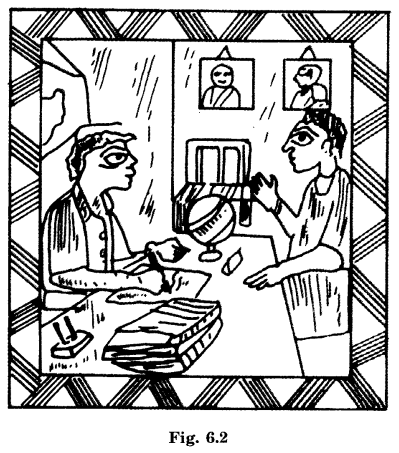 They argued strongly that Mohan had been beaten up in front of them and had they not rescued him he would have been injured very seriously. They insisted that the case be registered. Finally, the officer agreed. He asked Mohan to write down his complaint and also told the people that he would send a constable the next day to investigate the incident.

Question Box: (NCERT Page 50)
(i) Show the above situation in the police station through a skit.
(ii) Then talk about how you felt playing Mohan’s role or that of the S.H.O. or the neighbours.
(iii) Could the S.H.O. have handled the situation differently?
Answer:
(i) Please see the skit in the story.

(ii) I felt very Sorry for playing Mohan’s role, as no one in the police station helped me initially.
The S.H.O.’s role, in the beginning, was very disappointing. He should have behaved in a gentleman’s tone. He should have tackled the situation in a very judicious manner.

The neighbours instead of going to the police station should have gone to Raghu or the Village Panchayat to dissuade Raghu from giving back the portion of land to Mohan.

(iii) The S.H.O. could have handled the situation differently.

Question 3.
You saw that Mohan and Raghu were arguing heatedly whether the common boundary of their fields had been shifted. Isn’t there a way by which they could have settled this dispute in a peaceful manner? Are there records that show who owns what land in the village? Let’s find out how this is done. (NCERT Page 51)
Answer:

Question 4.
Question Box: (NCERT Page 51)
(i) Find out the term used for the Patwari in your state:
(ii) If you live in a rural area, find out
(a) How many villages do the Patwari of your area maintain land records of?
(b) How do people in the village contact him/her?
Answer:
(i) Patwari in Delhi: (Lekhpal in U.P.). in)
(ii) (a) A group of villages.
(b) The Patwari fixes the days in each village. Usually, Panchayat President’s office is his office. People can contact him in this office.

Question 5.
The Khasra record of the Patwari gives you information regarding the map given below. It identifies which plot of land is owned by whom. Look at both the records and the map and answer the questions given below regarding Mohan and Raghu’s land. 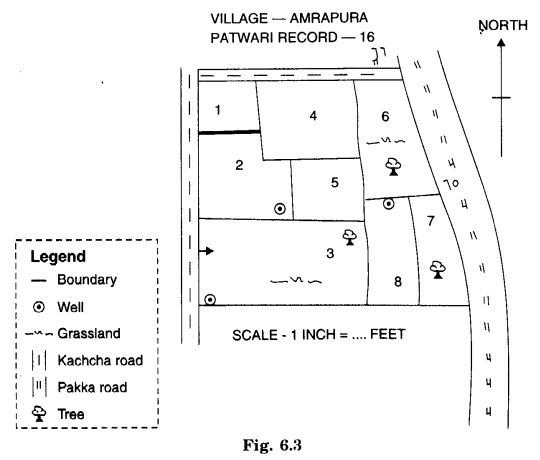 Question 6.
When do you think farmers may require a copy of this record? Study the following situations and identify the cases in which these records would be necessary and why.

Question 7.
Other Public Services- A survey
This chapter has looked at some of the administrative work of the government, especially for rural areas. The first example related to maintaining law and order and the second to maintaining land records. In the first case, we examined the role of the police and in the second that of the Patwari. This work is supervised by other people in the department, such as the Tehsildar or the Superintendent of Police. We have also seen how people use these services and some of the problems that they face. These services have to be used and made to function according to the laws that have been framed for them. You have probably seen many other public services and facilities provided by various departments of the government.

Do the following exercise for your village/by visiting a nearby village or looking at your own area.

List the public services in the village/area such as the milk society, the fair price shop, the bank, the police station, the agricultural society for seeds and fertilizer, the post office or sub-post office, the Anganwadi, creche, government school/s, health centre or government hospital, etc. Collect information on three public services and discuss with your teacher how improvements can be made in their functioning. One example has been worked out. (NCERT Page 54)
Answer:
Public services in the village: 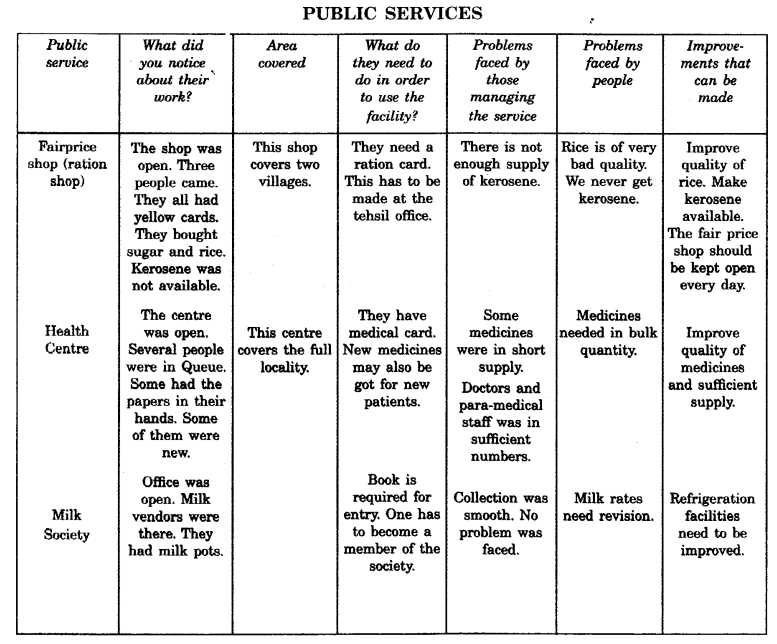