Question 1.
Look at the picture given below : 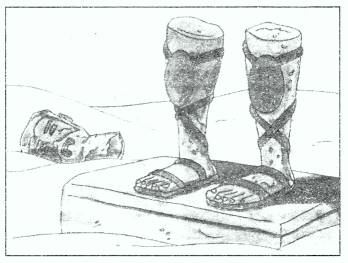 While on a sight-seeing tour to an old and mysterious country far away from home, you saw this statue. Discuss with your partner what this picture tells you about the people, the place and the ruler.

Note down your ideas in the web-chart.

Meant for discussion in groups. The following information shall help the students in this discussion :

(a) symbolising lifelessness, death, nature’s destructive capacity etc.
(b) disfigured, is destroyed and disfigured by the cruel hands of nature and time
(c) cruel, pitiless, ruthless, hateful, cold-blooded and inhuman.
(d) could have lived in sheer fear, terror and ruthlessness of the king who knew no human values like pity, compassion, sympathy etc.

Question 2.
Write a letter to your friend about the sight you saw and your impression of it. (V. Imp.)
Answer:

I hope you’re feeling well. In this letter I am writing about a strange sight. I saw this sight while returning from my long walk in Jaisalmer.

I was amazed to see two vast and trunkless legs of stone standing on a pedestal in the desert. Near them there lay a broken human face. The human face had expressions of arrogance, frown and sneer of cold command. From these expressions and the fine carving I, at once, understood everything. The sculptor who carved this statue was really an intelligent artist. He had truly understood these expressions and had carved them in stone. His mocking these and the heart which nurtured these were clearly visible in the expressions of the statue.

I was extremely taken aback to see the pedestal which had the writing : ‘My name is Ozymandias, king of kings. Look at my works and despair’. Truly, the message was loud and clear. All around that statue the boundless sands stretched far away.

The message was that one’s emotions or a king’s power are the food of Time and Nature. Ozymandias had understood it but it was too late. Now his destiny or the destiny of even the mightiest were symbolised by the broken statue and the sands.

Question 3.
Answer the following questions by ticking the correct options.

(a) “The hand that mocked them, and the heart that fed.” Whose hand and heart has the poet referred to in this line ?

(b) “My name is Ozymandias, king of kings Why does Ozymandias refer to himself as King of Kings ? What quality of the king is revealed through this statement ? (V. Imp.)

(c) “Look on my works, ye Mighty, and despair !” Who is Ozymandias referring to when . he speaks of ye Mighty ? Why should they despair ?

(e) ‘Nothing beside remains’. What does the narrator mean when he says these words ?

(g) What message is conveyed through this poem ?
Or
What message does the poem, ‘Ozymandias’ convey ? (CBSE 2015)

(a) The poet has referred to the hand of the sculptor and the heart of the king Ozymandias.

(b) Ozymandias refers to himself as the King of Kings out of sneer, arrogance, haughtiness and contempt for other Kings. It is so as he heads them all in these qualities. This line also shows that Ozymandias had also understood the uselessness of these things but at a later stage.

(c) He is referring to the mighty Kings. They should despair at seeing the end of his haughtiness, contempt, pride, arrogance and cruelty through the statue.

(d) The irony in the poem is that it shows the arrogance, haughtiness, contempt and cruelty of Ozymandias but what is the result? The broken statue and the vastness of the sands symbolise the uselessness of these emotions.

(e) The narrator means that there is no other thing of the king who once was mighty, powerful, ruthless and cruel.

(f) My impression about Ozymandias is that he was a ruthless King. He was stupid also and lacked wisdom, farsightedness and humility when he was young. But these also refer to his having seen the truth of life in his later stage of life, together with his self-realisation.

(g) The message conveyed through the poem is the futility of these traits of arrogance, sneer and cruelty. It also shows all the powerfulness of Time and Nature. These I traits meet an end as it comes to this arrogant King.

The Narrator : I met a traveller from an antique land who said :
Nothing beside remains …… far away
The Traveller : “Two vast and trunkless legs of stone ……
And on the pedestal these words appear :
Ozymandias : “My name is Ozymandias …… despair !”

Question 6.
Shelley’s sonnet follows the traditional structure of the fourteen-line Italian sonnet, featuring an opening octave, or set of eight lines, that presents a conflict or dilemma, followed by a sestet, or set of six lines, that offers some resolution or commentary upon the proposition introduced in the octave. Read the poem carefully and complete the following table on the structure of the poem.

Question 7.
Complete the table listing the poetic devices used by Shelley in Ozymandias.

Question 8.
Imagine that Ozymandias comes back to life and as he sees the condition of his statue, realisation dawns on him and he pens his thoughts in a diary. As Ozymandias, make this diary entry in about 150 words. You could begin like this : I thought I was the mightiest of all but… (Imp.)

I thought I was the mightiest of all but I was greatly mistaken in my belief. While I ruled my kingdom I proved to be the most cruel, arrogant, pitiless and ruthless king. No one dared to look up or into my eyes. I knew it very well that ruling the common people is not easy. They don’t understand the language of love, pity and compassion. It is the politics of barbarism and ruthlessness of the ruler that keeps the people subdued. I also thought that I would rule forever.

But soon I found that I was utterly in the wrong. No one is immortal. The most powerful are Time and Nature who are the most ruthless rulers of human beings and all. To give my message I had got installed my own statue with this message of the futility of arrogance and cold command written on its pedestal. When I saw the condition of my own statue I realized this basic truth of life. What remains of my statue are, my two legs. My own head lies in sand with these expressions of arrogance, haughtiness, sneer of cold command. The broken statue and vast sands convey that Nature and Time are the mightiest.

Question 9.
‘Ozymandias’ and ‘Not Marble, nor the Gilded Monuments’ are on Time. Compare the two sonnets in terms of the way in which Time is treated by the poets. Write your answer in about 150 words.

‘Ozymandias’ and ‘Not Marble, nor the Gilded Monuments’ have Time at their centre. This element is unseen in these poems, yet it controls both of them. In fact, the themes of these two poems conjoin. Basically, the common theme is that Time is all powerful. With the passage of time all living things and things of art start degenerating. Ozymandias’s statue is now in a bad shape. Its two trunkless legs stand and the trunk and face lie broken. Obviously, Time has claimed them.

In ‘Not Marble, nor the Gilded Monuments’, princes or kings get the monuments constructed in their memories. Wars, Time, Nature spoil them and these monuments and statues are destroyed by all powerful Time. However, as contrasted to them the poet’s beloved lives ‘in the eyes of posterity’.