Question 1.
In a bisexual flower, inspite of the young stamens being removed artificially, the flower produces fruit. Provide a suitable explanation for the above situation.
Answer:
The open flowers are generally cross pollinated. Removal of stamens of a bisexual flower will not affect pollination of its intact pistil and formation of fruit.

Question 3.
What is a clone ? Why do offspring formed by asexual reproduction exhibit remarkable similarity ?
Answer:
Clone is an exact genetic replica of another individual. All the offspring formed from a parent through asexual reproduction are clones of one another as well as their parent. The remarkable similarity of asexually produced daughter individuals is due to genetic similarity as they possess exact copies of DNA of their parent.

Question 4.
Explain how, offspring and parents of organisms reproducing sexually have the same number of chromosomes/DNAs.
(CCE 2014, CBSE Delhi 2017)
Answer:
The parents are diploid (2n) as each of them has two sets of chromosomes (DNAs). They form haploid (In) male and female gametes through the process of meiosis. The haploid gametes have one set of chromosomes (DNAs). During fertilization, one male gamete fuses with one female gamete. It restores the diploid (2n) chromosome/DNA number in the offspring that is formed from fusion product or zygote (2n).

Question 7.
Give two reasons for the appearance of variations among the progeny formed by sexual reproduction.
Answer:
Variations appear in the progeny of sexually reproducing organisms due to

Question 8.
Would a Planaria cut vertically into two halves regenerate into two individuals ?
Answer:
Yes. Each piece of Planaria is able to grow the missing parts and form the complete organism.

Question 12.
Is the chromosome number of zygote, emboryonal cells and adult of a particular organism always constant ? How is the constancy maintained in these three stages ?
Answer:
Zygote is the first diploid structure. It undergoes mitotic divisions to form embryonal cells. Embryonal cells further divide by mitosis to form the adult. Mitosis maintains the same chromosome number in the daughter cells.

Question 13.
Where is the zygote located in the flower after fertilization ?
Answer:
Zygote is the fertilized oosphere which occurs in the embryo sac present inside an ovule located in the ovary part of the pistil.

Question 14.
Reproduction is linked to stability of population of a species. Justify the statement.
Answer:
Reproduction maintains the size and composition of population of a species by regularly adding new individuals for replacing the ones getting killed due to ageing, disease or predation. It also adds variations that allow the individuals to adapt to changing environment.

Question 16.
Trace the path of sperm during ejaculation and mention the glands and their function associated with the male reproductive system.
Answer:
Ejaculated sperms are the ones which are stored in epididymes. They are formed regularly in seminiferous tubules from where they pass through vasa efferentia into epididymes. At the time of ejaculation, the sperms are first pushed through vasa deferentia, enter ejaculatory duct where they receive secretion of seminal vesicles and then urinogenital duct where the secretion of prostate gland is poured to form semen. The urinogenital duct is lubricated by secretion of a pair of Cowper’s glands (bulbourethral glands).
Secretion of Seminal Vesicles. Nourishment, activation and providing fluid medium for sperm transport.
Secretion of Prostates Gland. Motility of Sperms.

Question 17.
What changes are observed in the uterus if fertilization does not occur ? (CBSE Delhi 2017)
Answer:
Glands present in the mucosa of uterine endometrium begin to degenerate. This sloughs off the endometrial lining, releasing a lot of mucus and blood. It is called menstruation. Menstruation lasts for 3-5 days.

Question 18.
What changes are observed in the uterus subsequent to implantation of young embryo ? (CBSE Delhi 2017)
Answer:
Endometrium thickens, becomes glandular and highly vascular. The contact region between embryo and uterine wall grows into placenta. Placenta helps the embryo in obtaining nourishment and oxygen from blood sinuses of the uterus. It also helps in transfer of wastes from embryo to the blood of the mother.

Question 19.
What are the benefits of using mechanical barriers during sexual act ?
Answer:

Question 21.
What would be the ratio of chromosome number between an egg and its zygote ? How is the sperm genetically different from the egg ?
Answer:
Chromosome Number in Egg and Zygote. 1 : 2
Genetic Difference between Sperm and Egg. Sperms are genetically of two types, X-containing and Y-containing. Eggs are always of one type, X-containing.

(b) Development of Variation in Sexual Reproduction:
Sexual reproduction produces a number of variations in the population due to

Question 24.
Distinguish between pollination and fertilization. Mention the site and product of fertilization in a flower. Draw a neat, labelled diagram of a pistil showing pollen tube growth and its entry into the ovule.
Answer:
(a) Differences between Pollination and Fertilization 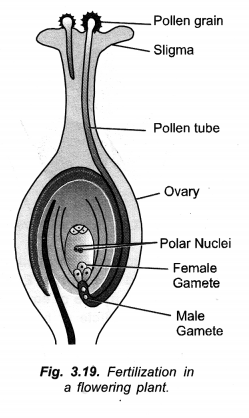 Question 25.
Distinguish between a gamete and zygote. Explain their roles in sexual reproduction.
Answer:
Differences between Gamete and Zygote

Role of Gamete. Gamete is sex or germ cell which is specialized to take part in sexual reproduction. There are two types of gametes, male and female. Each of them carries one set of chromosomes which are randomly obtained from its parent. Fusion of male gamete with a female gamete produces a zygote.
Role of Zygote. It is the first’cell of new generation. Zygote develops into embryo that later forms the new individual.

Question 26.
Draw the diagram of a flower and label the four whorls. Write the names of gamete producing organs in the flower.
Answer:
(a) 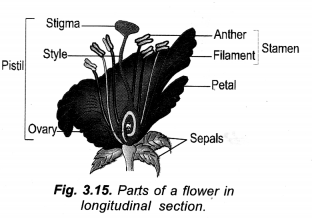 Question 27.
What is placenta ? Mention its role during pregnancy. (CCE 2011, 2014)
Answer:
Placenta: It is a special double layered, spongy tissue connection between the foetus and uternine wall found in pregnant females. It has finger-like outgrowths or villi which are in contact with blood sinuses present in the uterine wall.
Role:

Question 29.
Flow does fertilization take place ? Fertilization occurs once in a month. Comment.
Answer:
In human beings, fertilization is internal. It can occur within 2-3 days of ovulation (between 14th and 16th day of menstrual cycle). Fertilization generally takes place in ampulla (ampulla-isthmus border) part of fallopian tube where ovum rests for several hours after entry into oviduct. The sperms have to reach there. Sperms deposited in the vagina reach there partly by their own movement and partly by local movements of reproductive tract. Both sperms and eggs are viable for 24-48 hours. A sperm reaching the surface of ovum, dissolves its covering and passes its head and middle part into it. It results in fertilization and formation of zygote.
Fertilization only once in a Month. A single ovum is released by female roughly in the middle of menstrual cycle which has a span of 4 weeks. Therefore, fertilization can occur only once in a month.

(d) Variations:
Variations are differences found in morphological, physiological and other traits of individuals belonging to the same organism, race or family. They develop due to

(e) Absence of Variations: Due to absence of variations, asexually reproduced organisms are unable to adapt themselves to changes in the environment.

Hope given NCERT Exemplar Solutions for Class 10 Science Chapter 8 How do Organisms Reproduce? are helpful to complete your science homework.