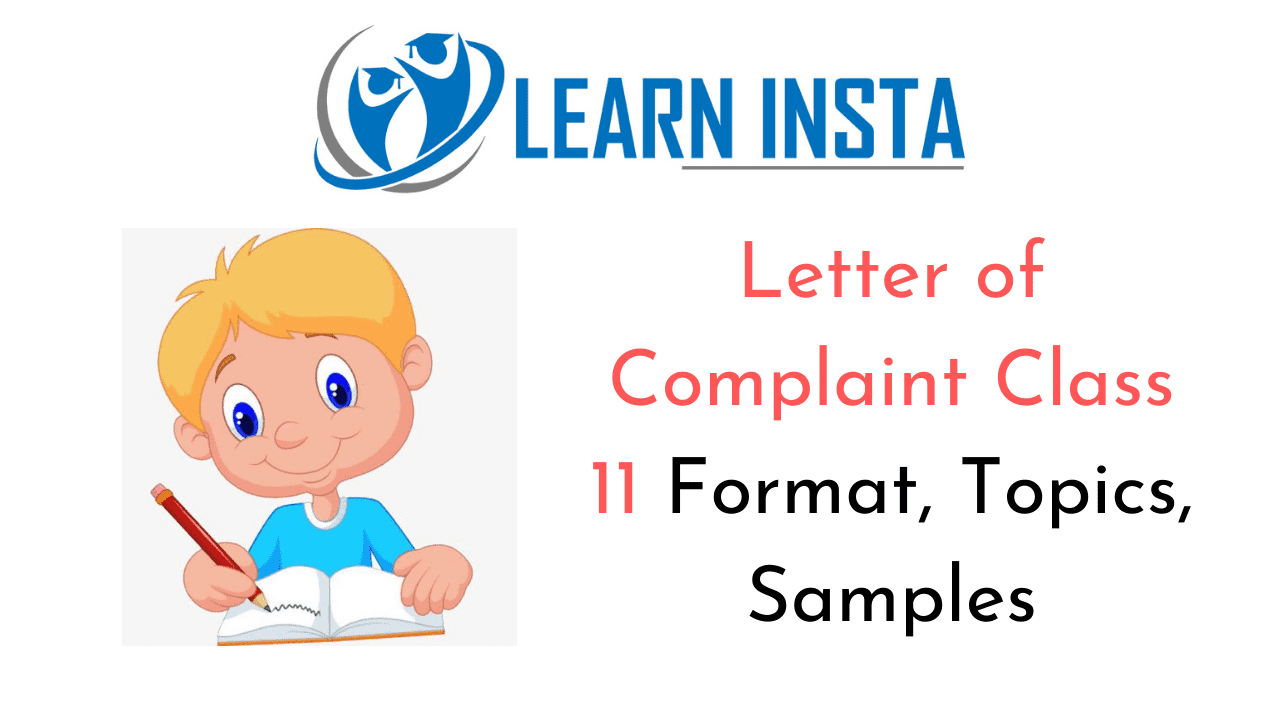 This grammar section explains English Grammar in a clear and simple way. There are example sentences to show how the language is used. Students can also read NCERT Solutions for Class 11 English to get good marks in CBSE Board Exams.

Question 1.
You read in a newspaper the news ‘An Old Couple Murdered in South Delhi’. You decide to write a letter to the Commissioner of Police, complaining against the rising rate of crime against the old people. Write the letter giving suggestions for the security of the elderly. You are Aanchal of B-6/12, Phase I, Ashok Vihar.
Answer:

Sub: Crime Against the Aged

Through the letter, I want to raise the issue of the rising crime and violence against the aged. Every other day, we hear of the murder or robbing of the elderly. There have been even some cases of the old women living alone being raped.

I feel police can do a lot to make the aged feel secure in their homes. Beat constables should be instructed to visit the old and the aged single people from time to time. There can be a special phone number at every police station for the use of the aged. The police officers and constables . should be given special training to be sensitive to the needs of the aged.

I hope the police department will take some effective measures soon to prevent crime against the aged.

Question 2.
Write a letter to the Chief Post Master, General Post Officer, Lucknow complaining of late delivery of letters causing a lot of inconvenience to you. You are Meena/Mohit of 21, Babuganj, Lucknow.
Answer:

I am writing to you in great anguish on a subject which should be treated on top priority by you and your department.

I am suffering a lot of inconvenience due to the late delivery of letters for no fault of mine. Letters reach me as late as a month from the date of receipt at Lucknow post office. I lost a job opportunity as the interview call was received a week after it was held.

I have earlier complained to the Post Master, Babuganj, but to no avail. I now request you to look into the matter and remedy the situation.

Question 3.
You are Ansh / Anshu of 15, Alipur Road, Delhi. Write a letter to the Municipal Commissioner
about the insanitary conditions of your locality. [NCT 2009]
Answer:

Subject: Insanitary Conditions in the Locality

(Develop these points into complete sentences.)
I request for an early action.

Question 4.
You are Rahul/Rani of 246, Andrews Park, New Delhi. Your telephone is out of order for the last
fortnight. You have made many complaints to the local office but in vain. Write a letter of complaint to the General Manager, Mahanagar Telephone Nigam Ltd. [KVS 2007]
Answer:

Subject: Non-functioning of Telephone No. 2701XXXX

It is out of desperation that I am forced to write to you.

My telephone no. 2701XXXX has been out of order for the last fortnight. The first monsoon showers and the subsequent flooding has caused my phone to stop functioning. Since then, I have made several complaints to the Assistant Engineer, Area Manager and the Zonal Manager but the fault has not been rectified.

I request you to kindly look into the matter and give the necessary instructions so that my telephone is restored. I also request you to waive the charges for the fortnight in which my phone was not functional.

Hoping for a positive response.

Question 5.
You have taken broadband facility from the MTNL, but the service is far from satisfactory. The connection is weak and often not available.

Write a letter to the Manager asking him to remedy the fault. Make up the necessary details signing as Vidya Bhushan/Vidya Rani.
Answer:

I took a broadband connection on my MTNL telephone no 2702XXXX in October 20XX. I regret to say that the service provided by you is far from satisfactory.

The modem given to me is unable to hold the connection for more than fifteen minutes. This causes service impairment in my work. Besides, often the connection gets weak and I lose the net in the middle of my work. Worst, sometimes I am not able to get the internet connectivity at all.
I request you to kindly look into the matter and make the broadband usable.

Hoping for an early action,

Question 6.
You are greatly disturbed by loudspeakers blaring at high volume particularly during festival times. Private functions, exhibitions and fairs, and religious occasions make use of loudspeakers without caring for the peace of local residents. Write a letter to the Superintendent of Police of your area requesting him to strictly enforce the law which prohibits the use of loudspeakers beyond 11 p.m. You are Rishiraj Narain, living at R-25, Sector 14, R.K.Puram, New Delhi.
Answer:

Subject: Complaint about blaring of loudspeakers

I wish to draw your attention to the gross violation of the peace of local residents by the blaring of loudspeakers.

I request you to strictly enforce the rules that forbid the use of loudspeakers beyond 11 p.m. Peace cannot be restored unless the police takes strict measures.

Hopefully some action will be taken in this matter.

Question 7.
As Avinash Aneja, Librarian, you had ordered two sets each of World History in Pictures (5 Vols.), Nature Study (16 Vols.) and The Story of Science (16 Vols.) from M/s Universal Book Suppliers, 14, Gali Ram Nath, Chandni Chowk, Delhi. Unfortunately, on receiving the books, you found that some volumes were missing in the sets and some were damaged. Write a letter complaining about the defective, deficient supply and ask them to rectify this situation. This order had been placed by you for the library of your school, Vivekanand Senior Secondary School, Vikaspuri, Delhi.
Answer:

Subject: Complaint about defective and deficient supply of books

We have received a parcel containing the books ordered by us in our letter of 4 December 20XX, ref.no. UBS/13/06.

It is extremely distressing to find such carelessness from a reputable bookseller like you. Kindly supply the missing volumes and replace the defective and damaged ones at the earliest.

Hoping for an early response.

Question 8.
You are Anuj/Anuja of 10, Panchali Nagar, Delhi. Last month you purchased an automatic Wingsung washing machine from Grand Electronics, against a warranty of two years. For one month, it worked well. Now you find that it is making an unbearable noise and clothes are not washed properly. Write a letter to the Manager of Grand Electronics, complaining about your problem and requesting him to replace the machine immediately.
Answer:

I bought a Wingsung washing machine, model no. LVX20 from your shop on 24th November 20XX during the special Festive Sale. I am extremely sorry to state that within a month the machine has started malfunctioning.

The machine makes a peculiar rattling sound when spinning. Day by day the sound is getting louder. At the end of the wash, the clothes are almost as dirty as before. It is a waste of expensive detergent powder, electricity, labour and time.

Since the fault has occurred within the warranty period, I request you to kindly replace the machine. I am enclosing the photocopies of the bill of purchase and the warranty card.
I hope you will take an early action and do the needful.

Question 9.
You are Kanchan / Kavi staying at 12 Vaibhav Apartments, New Delhi. Last month you purchased a computer from K V Dealers, Gandhi Market, New Delhi with a warranty of 2 years; All of a sudden it has stopped functioning. Write a letter to the dealer complaining about it and requesting to replace it against the warranty that goes with it.
Answer:

I bought a Compac P.C. No. B-43z from your store on 4th February 20XX. I regret to say that it has now stoppbd working.

The problem seems to be in the CPU as I am unable to start the computer. I request you to replace . this defective piece as it is well within the guarantee period.

Hope an early action is taken.

Question 10.
You are Suresh Mathur. You bought a scooter manufactured by XYZ Company from Pinky Automobiles Ltd., Industrial Area, Chandigarh. You were told the scooter is of superior quality and that the parts were easily available. However, three months after you purchased the scooter, the brakes failed, gears stopped working and petrol tank started leaking. You took the scooter to various repair shops. Almost all of them have told you that the spare parts are not available. Write to XYZ company asking them to either replace the scooter or send you the spare parts.
Answer:

This is to bring to your notice the problems that I am facing with my new scooter LX2100, of XYZ company, purchased from you on 7th Sept, 20XX.

I was assured of the excellent quality of the scooter by you. Unfortunately within three months of purchase, I have started facing problems. The brakes have started to give trouble and have led to a minor accident. Then the gears have started slipping and I have lost control of the power and speed of my vehicle. The leak in the petrol tank is the last straw. Now, I am unable to take my scooter on the road. I was assured that the parts of this scooter are easily available. In this matter too, your claims have proved false. I have not been able not find any genuine spare parts.

I request you to kindly solve my problem. The scooter is still within the guarantee period. Kindly take away this defective piece and replace it at the earliest.

I expect you to send your mechanic to see the things for himself.

Hoping for a quick response,

Question 11.
You are Manish/Manisha Verma living at 59, Saraswati Enclave, Sector 9, Rohini, Delhi. You had taken a tour to Badrinath, Kedarnath and Haridwar conducted by Ideal Pilgrim Tours and Travels, D-22, Connaqght Place, New Delhi. During the trip you found the arrangements for stay unsatisfactory, the buses uncomfortable and the drivers and conductors rude. Write a letter to the manager complaining about these problems faced by you and your family.
Answer:

Subject: Complaint about the tour arrangements

My family and I have just returned from a tour of Haridwar, Badrinath and Kedarnath, conducted by your company. I regret to say that it was not a happy experience.

Though we paid for deluxe air-conditioned buses, we did not find them comfortable. The air conditioning did not work; seat cushions were torn and damaged. Staying arrangements were comfortable but service was poor-no blankets till midnight. The worst and the most unfortunate, part was the rudeness of the bus driver and the conductor.

Please rectify these problems at the earliest to make the tours truly enjoyable.