Oxides and Oxoanions of Metals

Potassium dichromate is prepared from chromate ore. The ore is concentrated by gravity separation. It is then mixed with excess sodium carbonate and lime and roasted in a reverbratory furnace.

The above solution is concentrated to remove less soluble sodium sulphate. The resulting solution is filtered and further concentrated. It is cooled to get the crystals of Na2SO4.2H2O.

The saturated solution of sodium dichromate in water is mixed with KCl and then concentrated to get crystals of NaCl. It is filtered while hot and the filtrate is cooled to obtain K2Cr2O7 crystals.

Potassium dichromate is an orange red crystalline solid which melts at 671K and it is moderately soluble in cold water, but very much soluble in hot water. On heating it decomposes and forms Cr2O3 and molecular oxygen. As it emits toxic chromium fumes upon heating, it is mainly replaced by sodium dichromate. 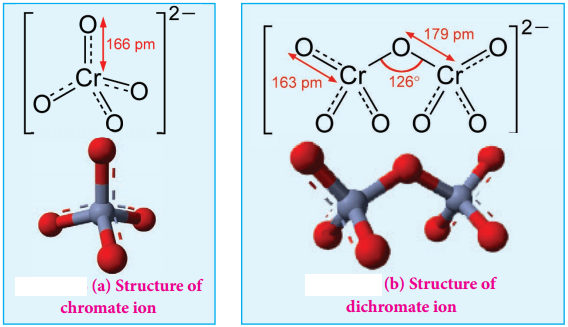 The oxidising nature of potassium dichromate (dichromate ion) is illustrated in the following examples.

(i) It oxidises ferrous salts to ferric salts.

(vi) It oxidises alcohols to acids.

When potassium dichromate is heated with any chloride salt in the presence of Conc H2SO4, orange red vapours of chromyl chloride (CrO2Cl2) is evolved. This reaction is used to confirm the presence of chloride ion in inorganic qualitative analysis.

The chromyl chloride vapours are dissolved in sodium hydroxide solution and then acidified with acetic acid and treated with lead acetate. A yellow precipitate of lead chromate is obtained.

Some important uses of potassium dichromate are listed below.

(i) Conversion of MnO2 to potassium manganate:

Powdered ore is fused with KOH in the presence of air or oxidising agents like KNO3 or KClO3. A green coloured potassium manganate is formed.

Potassium manganate thus obtained can be oxidised in two ways, either by chemical oxidation or electrolytic oxidation.

In this method potassium manganate is treated with ozone (O3) or chlorine to get potassium permanganate.

In this method aqueous solution of potassium manganate is electrolyzed in the presence of little alkali.

H2 is liberated at the cathode.

The purple coloured solution is concentrated by evaporation and forms crystals of potassium permanganate on cooling.

Potassium permanganate exists in the form of dark purple crystals which melts at 513 K. It is sparingly soluble in cold water but, fairly soluble in hot water.

Permanganate ion has tetrahedral geometry in which the central Mn7+ is sp3 hybridised.

On treating with cold conc H2SO4, it decomposes to form manganese heptoxide, which subsequently decomposes explosively.

But with hot conc H2SO4, Potassium permanganate give MnSO4.

(a) In neutral medium:

In neutral medium, it is reduced to MnO2

(i) It oxidises H2S to sulphur

(ii) It oxidises thiosulphate into sulphate

(b) In alkaline medium:

In the presence of alkali metal hydroxides, the permanganate ion is converted into manganate.

This manganate is further reduced to MnO2 by some reducing agents.

So the overall reaction can be written as follows.

This reaction is similar as that for neutral medium.

Cold dilute alkaline KMnO4 is known as Bayer’s reagent. It is used to oxidise alkenes into diols. For example, ethylene can be converted into ethylene glycol and this reaction is used as a test for unsaturation.

In the presence of dilute sulphuric acid, potassium permanganate acts as a very strong oxidising agent. Permanganate ion is converted into Mn2+ ion.

The oxidising nature of potassium permanganate (permanganate ion) in acid medium is illustrated in the following examples.

(i) It oxidises ferrous salts to ferric salts.

(v) It oxidises nitrites to nitrates

(vi) It oxidises alcohols to aldehydes.

(vii) It oxidises sulphite to sulphate

Some important uses of potassium permanganate are listed below.

In the inner transition elements there are two series of elements.

The position of Lanthanoids in the periodic table

The actual position of Lanthanoids in the periodic table is at group number 3 and period number 6. However, in the sixth period after lanthanum, the electrons are preferentially filled in inner 4f sub shell and these fourteen elements following lanthanum show similar chemical properties. Therefore these elements are grouped together and placed at the bottom of the periodic table. This position can be justified as follows.

Similarly the fourteen elements following actinium resemble in their physical and chemical properties. If we place these elements after Lanthanum in the periodic table below 4d series, the properties of the elements belongs to a group would be different and it would affect the proper structure of the periodic table. Hence a separate position is provided to the inner transition elements as shown in the figure. 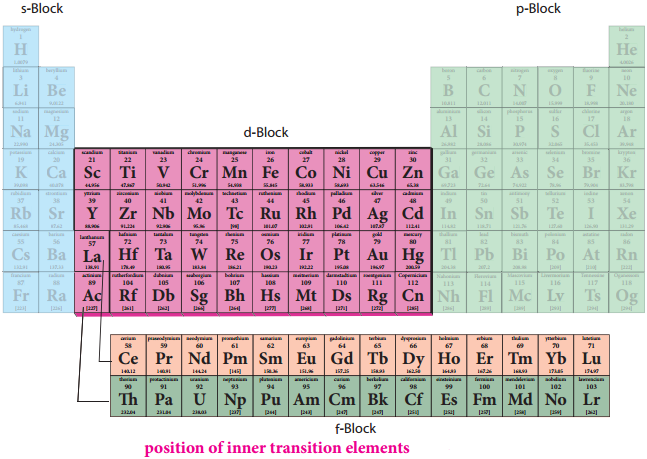 We know that the electrons are filled in different orbitals in the order of their increasing energy in accordance with Aufbau principle. As per this rule after filling 5s, 5p and 6s and 4f level begin to fill from lanthanum, and hence the expected electronic configuration of Lanthanum(La) is [Xe] 4f1 5d° 6s2 but the actual electronic configuration of Lanthanum is [Xe] 4f° 5d1 6s2 and it belongs to d block.

Filling of 4f orbital starts from Cerium (Ce) and its electronic configuration is [Xe] 4f1 5d1 6s2. As we move from Cerium to other elements the additional electrons are progressively filled in 4f orbitals as shown in the table. 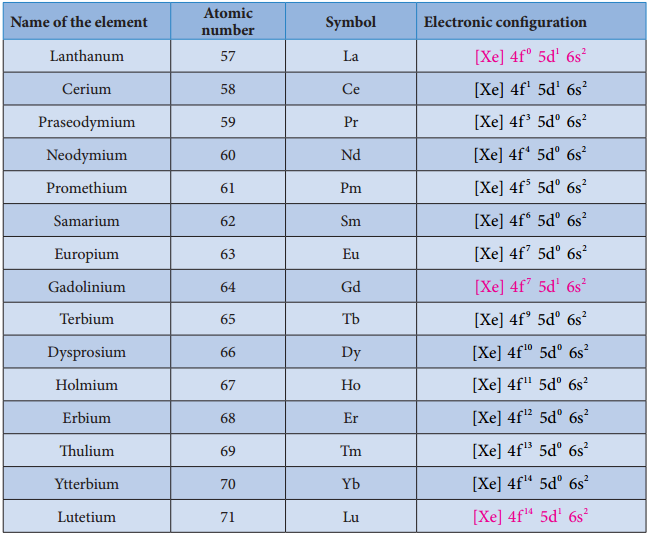 In Gadolinium (Gd) and Lutetium (Lu) the 4f orbitals, are half-filled and completely filled, and one electron enters 5d orbitals. Hence the general electronic configuration of 4f series of elements can be written as [Xe] 4f1-14 5d0-1 6s2

The common oxidation state of lanthanoids is +3. In addition to that some of the lanthanoids also show either +2 or +4 oxidation states. Gd3+ and Lu3+ ions have extra stability, it is due to the fact that they have exactly half filled and completely filled f-orbitals respectively their electronic configurations are

As we move across 4f series, the atomic and ionic radii of lanthanoids show gradual decrease with increse in atomic number. This decrease in ionic size is called lanthanoid contraction. As we move from one element to another in 4f series (Ce to Lu) the nuclear charge increases by one unit and an additional electron is added into the same inner 4f sub shell. We know that 4f sub shell have a diffused shapes and therefore the shielding effect of 4f elelctrons relatively poor hence, with increase of nuclear charge, the valence shell is pulled slightly towards nucleus. As a result, the effective nuclear charge experienced by the 4f elelctorns increases and the size of Ln3+ ions decreases. Lanthanoid contraction of various lanthanoids is shown in the graph.

In the complete f – series only 10 pm decrease in atomic radii and 20 pm decrease in ionic radii is observed because of this very small change in radii of lanthanoids, their chemical properties are quite similar.

The fourteen elements following actinium, i.e., from thorium (Th to lawrentium (Lr) are called actinoids. Unlike the lanthanoids, all the actinoids are radioactive and most of them have short half lives. Only thorium and uranium (U) occur in significant amount in nature and a trace amounts of Plutonium (Pu) is also found in Uranium ores. Neptunium (Np) and successive heavier elements are produced synthetically by the artificial transformation of naturally occuring elements by nuclear reactions. Similar to lanthanoids, they are placed at the bottom of the periodic table. 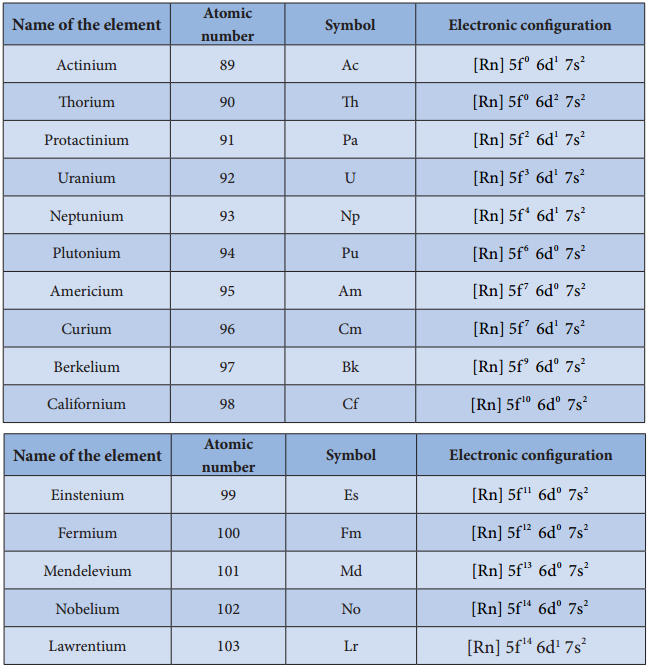 Differences Between Lanthanoids and Actinoids: