Question 2.
The electrical resistivity of few materials is given below in ohm-meter. Which of these materials can be used for making element of a heating device ?

Question 3.
Electrical resistivities of some substances at 20°C are given below :

Answer the following questions in relation to them :

Question 4.
The following table gives the resistivity of three samples :

Question 5.
Two metallic wires A and B are connected in series. Wire A has length l and radius r, while wire B has length 2l and radius 2r. Find the ratio of the total resistance of series combination and the resistance of wire A, if both the wires are of same material
Answer:

Question 6.
Two metallic wires A and B of same material are connected in parallel. Wire A has length l and radius r and wire B has length 2l and radius 2r. Compute the ratio of the total resistance of parallel combination and the resistance of wire A.
(CBSE Sample Paper)
Answer:

Question 7.
Two students perform the experiments on series and parallel combinations of two given resistors R1 and R2 and plot the following V-I graphs.

Question 8.
Two electric circuits I and II are shown in figure.

Question 9.
An electrician puts a fuse of rating 5 A in that part of domestic electrical circuit in which an electrical heater of rating 1.5 kW, 220 V is operating. What is likely to happen in this case and why ? What change, if any needs to be made ?
(CBSE Sample Paper)
Answer:
The fuse will melt and the circuit breaks if electric current more than the rating of fuse (i.e., 5 A) flows in the circuit. Electric current flowing in the circuit,

Since, current flowing in the circuit (6.82 A) is more than the rating of fuse (5 A), therefore, the fuse will melt and the electrical heater does not work. To operate the heater, fuse of rating 10 A is to be put in the circuit.

Question 10.
The electric power consumed by a device may be calculated by using either of the two expressions: P = I2R or P = V2/R . The first expression indicates that the power is directly proportional to R,whereas the second expression indicates inverse proportionality. How can the seemingly different dependence of P on R in these expressions be explained ?
(CBSE Sample Paper)
Answer:
P = I2R is used when current flowing in every component of the circuit is constant. This is the case of series combination of the devices in the circuit.
P = V2/R is used when potential difference (V) across every component of the circuit is constant. This expression is used in case of parallel combination in the circuit. In series combination, R is greater than the value of R in parallel combination. 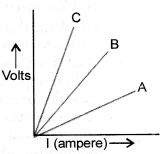 Since, slope of C is greater than the slopes of A and B. Therefore, C represents the graph for series combination of the other two.

Question 12.
V-I graphs for the two wires A and B are shown in the figure. If we connect both the wires one by one to the same battery, which of the two will produce more heat per unit time ? Give justification for your answer (CBSE 2014, 2015)
Answer:
Heat produced per unit time = V2/R
Now slope of V-I graph = R (resistance of wire).

Question 13.
The resistivities of some substances are given below :

Answer the following questions in relation to them giving justification for each :
(i) Which material is best for making connecting cords ?
(ii) Which material do you suggest to be used in heater elements ?
(iii) You have two wires of same length and same thickness. One is made of material A and another of material D. If the resistance of wire made of A is 2 Ω, what is the resistance of the other wire ?
Answer:
(i) Material A is best for making connecting cords as its resistivity is the lowest one.
(ii) For heater elements, material of high resistivity is used. Therefore, the material E is to be used in heater elements.

Hope given HOTS Questions for Class 10 Science Chapter 12 Electricity are helpful to complete your science homework.