We already learnt that the properties of elements largely depends on their electronic configuration, size,  ionisation enthalpy, electronegativity etc. Let us discuss the general trend in such properties of various p-block elements.

The halogens have a strong tendency to gain an electron to give a stable halide ion with completely filled electronic configuration and hence – 1 oxidation state is more common in halogens. Similarly, the other elements belonging to pnictogen and chalcogen groups also show negative oxidation states. 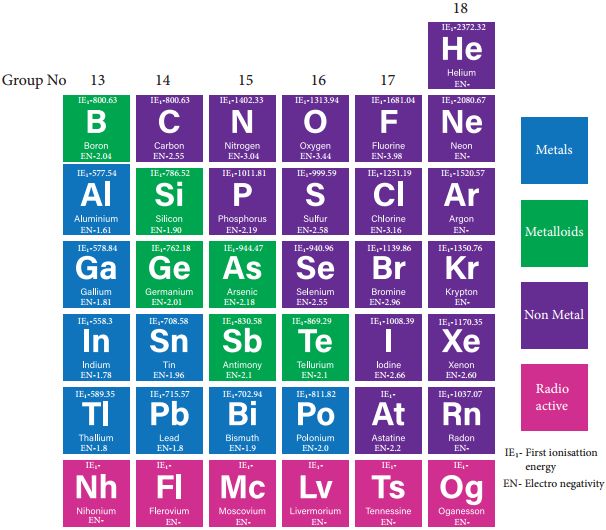 In p-block, the elements present in lower left part are metals while the elements in the upper right part are non metals. Elements of group 13 have metallic character except the first element boron which is a metalloid, having properties intermediate between the metal and nonmetals. The atomic radius of boron is very small and it has relatively high nuclear charge and these properties are responsible for its nonmetallic character.

We have already learnt that as we move down a group, generally there is a steady decrease in ionisation enthalpy of elements due to increase in their atomic radius. In p-block elements, there are some minor deviations to this general trend. In group 13, from boron to aluminium the ionisation enthalpy decreases as expected. But from aluminium to thallium there is only a marginal difference.

This is due to the presence of inner d and f-electrons which has poor shielding effect compared to s and p-electrons. As a result, the effective nuclear charge on the valance electrons increases. A similar trend is also observed in group 14.

The remaining groups (15 to 18) follow the general trend. In these groups, the ionisation enthalpy decreases, as we move down the group. Here, poor shielding effect of d- and f-electrons are overcome by the increased shielding effect of the additional p-electrons. The ionisation enthalpy of elements in successive groups is higher than the corresponding elements of the previous group as expected.

As we move down the 13th group, the electronegativity first decreases from boron to aluminium and then marginally increases for Gallium, there after there is no appreciable change. Similar trend is also observed in 14th group as well. In other groups, as we move down the group, the electro negativity decreases. This observed trend can be correlated with their atomic radius.

Anomalous Properties of the First Elements:

In p-block elements, the first member of each group differs from the other elements of the corresponding group. The following factors are responsible for this anomalous behaviour.

The first member of the group 13, boron is a metalloid while others are reactive metals. Moreover, boron shows diagonal relationship with silicon of group 14. The oxides of boron and silicon are similar in their acidic nature. Both boron and silicon form covalent hydrides that can be easily hydrolysed. Similarly, except boron trifluoride, halides of both elements are readily hydrolysed.

In group 14, the first element carbon is strictly a nonmetal while other elements are metalloids (silicon & germanium) or metals (tin & lead). Unlike other elements of the group carbon can form multiple bonds such as C=C, C=O etc. Carbon has a greater tendency to form a chain of bonds with itself or with other atoms which is known as catenation. There is considerable decrease in catenation property down the group (C>>Si>Ge≈Sn>Pb).

In group 15 also the first element nitrogen differs from the rest of the elements of the group. Like carbon, the nitrogen can from multiple bonds (N=N, C=N, N=O etc…). Nitrogen is a diatomic gas unlike the other members of the group. Similarly in group 16, the first element, oxygen also exists as a diatomic gas in that group. Due to its high electronegativity it forms hydrogen bonds.

The first element of group 17, flourine the most electronegative element, also behaves quiet differently compared to the rest of the members of group. Like oxygen it also forms hydrogen bonds. It shows only -1 oxidation state while the other halogens have +1, +3, +5 and +7 oxidation states in addition to -1 state. The flourine is the strongest oxidising agent and the most reactive element among the halogens.

This shows that in thallium the stable lower oxidation state corresponds to the loss of np electrons only and not ns electrons. Thus in heavier posttransition metals, the outer s electrons (ns) have a tendency to remain inert and show reluctance to take part in the bonding, which is known as inert pair effect. This effect is also observed in groups 14, 15 and 16.

Some elements exist in more than one crystalline or molecular forms in the same physical state. For example, carbon exists as diamond and graphite. This phenomenon is called allotropism (in greek ‘allos’ means another and ‘trope’ means change) and the different forms of an element are called allotropes. Many p-block elements show allotropism and some of the common allotropes are listed in the table.

Table 2.2 : Some of common allotropes of p-block elements