Origin of study of colloid starts with Thomas Graham who observed diffusion of that a solution of sugar, urea or sodium chloride through a membrane but not glue, gelatine or gum. He called the former substances as crystalloids and the latter as colloids (In Greek, kola as gum, eidos-like).

Later it was realised that any substance can be converted into a colloid by reducing its particle size to 1-200nm.

Hence, colloid is a homogeneous mixture of two substances in which one substance (smaller proportion) is dispersed in another substance (large proportion).

One more type of classification is based on the forces acting between the dispersal phase and dispersion medium.

In lyophillic colloids definite attractive force or affinity exists between dispersion medium and dispersed phase. Examples: sols of protein and starch. They are more stable and will not get precipitated easily. They can be brought back to colloidal solution even after the precipitation by addition of the dispersion medium.

They are called irreversible sols
Examples: sols of gold, silver, platinum and copper.

The following table lists the types of colloids based on the physical states of dispersed phase and dispersion medium.

Classification of Colloids Based on the Physical State of Dispersed Phase and Dispersion Medium.

In general, colloidal are prepared by the following methods.

1. Dispersion Methods:
In this method larger particles are broken to colloidal dimension.

2. Condensation Methods:
In this method, smaller atom or molecules are converted into larger colloidal sized particles.

Using a colloid mill, the solid is ground to colloidal dimension. The colloid mill consists of two metal plates rotating in opposite direction at very high speed of nearly 7000 revolution/minute. 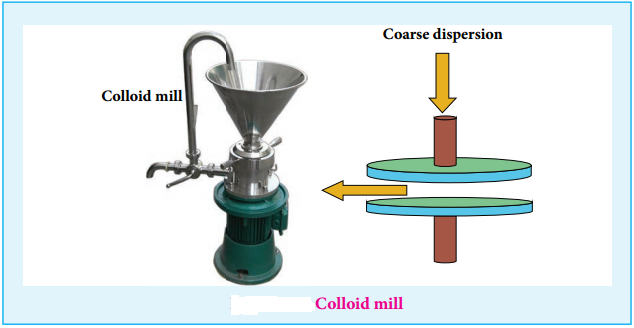 The colloidal particles of required colloidal size is obtained by adjusting the distance between two plates. By this method, colloidal solutions of ink and graphite are prepared.

A brown colloidal solution of platinum was first prepared by George Bredig in 1898. An electrical arc is struck between electrodes dispersed in water surrounded by ice. When a current of 1 amp/100 V is passed an arc produced forms vapours of metal which immediately condense to form colloidal solution. 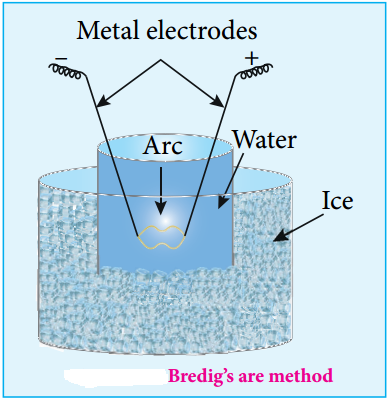 Svedberg modified this method for the preparation of non aqueous inflammable liquids like pentane, ether and benzene, etc using high frequency alternating current which prevents the decomposition of liquid.

Sound waves of frequency more than 20kHz (audible limit) could cause transformation of coarse suspension to colloidal dimensions. 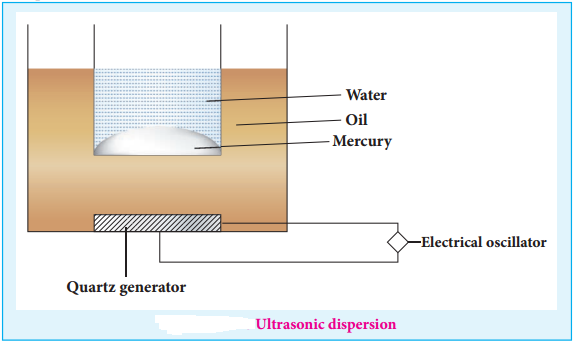 The ultrasonic vibrations produced by generator spread the oil and transfer the vibration to the vessel with mercury in water.

By addition of suitable electrolytes, precipitated particles can be brought into colloidal state. The process is termed as peptisation and the electrolyte added is called peptising or dispersing agent

When the substance for colloidal particle is present as small sized particle, molecule or ion, they are brought to the colloidal dimension by condensation methods. Here care should be taken to produce the particle with colloidal size otherwise precipitation will occur. Various chemical methods for the formation of colloidal particles.

Sols of some non metals are prepared by this method.

Many organic reagents like phenyl hydrazine, formaldehyde, etc are used for the formation of sols. For example: Gold sol is prepared by reduction of auric chloride using formaldehyde.

Sols of hydroxides of metals like chromium and aluminium can be produced by this method.

For the preparation of water insoluble sols this method can be used. When hydrogen sulphide gas is passed through a solution of arsenic oxide, a yellow coloured arsenic sulphide is obtained as a colloidal solution.
As2O3 +3H2S → As2S3 + 3H2O

3. By Exchange of Solvent:

Colloidal solution of few substances like phosphorous or sulphur is obtained by preparing the solutions in alcohol and pouring them into water. As they are insoluble in water, they form colloidal solution.

When current is passed, the impurities pass into water compartment and get removed periodically. This process is faster than dialysis, as the rate of diffusion of electrolytes is increased by the application of electricity. 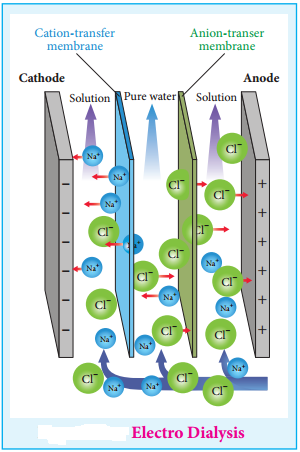 The pores of ordinary filter papers permit the passage of colloidal solutions. In ultra filtrations, the membranes are made by using collodion cellophane or visiking. When a colloidal solution is filtered using such a filter, colloidal particles are separated on the filter and the impurities are removed as washings.

This process is quickened by application of pressure. The separation of sol particles from electrolyte by filteration through an ultrafilter is called ultrafiltration. Collodion is 4% solution of nitrocellulose in a mixture of alcohol and water.

The colour of a sol is not always the same as the colour of the substance in the bulk. For example bluish tinge is given by diluted milk in reflected light and reddish tinge in transmitted light.

Colour of the sol, generally depends on the following factors.

3. Colloidal Solutions are Heterogeneous in Nature Having two Distinct Phases

Though experiments like dialysis, ultrafiltration and ultracentrifuging clearly show the heterogeneous nature in the recent times colloidal solution are considered as border line cases.

Colloidal solutions are quite stable i.e. they are not affcted by gravity.

When the colloidal solution is dilute, it is stable. When the volume of medium is decreased coagulation occurs. Generally, density of sol decreases with decrease in the concentration.

It is very interesting to know the various shapes of colloidal particles. Here are some examples

Colloids have optical property. When a homogeneous solution is seen in the direction of light, it appears clear but it appears dark, in a perpendicular direction. 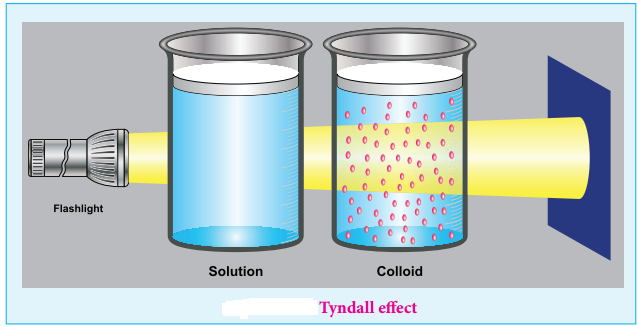 But when light passes through colloidal solution, it is scattered in all directions. This effect was first observed by Faraday, but investigations are made by Tyndall in detail, hence called as Tyndall effect.

The colloidal particles absorb a portion of light and the remaining portion is scattered from the surface of the colloid. Hence the path of light is made clear.

Robert Brown observed that when the pollen grains suspended in water were viewed through ultra microscope, they showed a random, zigzag ceaseless motion.

This is called Brownian movement of colloidal particles.

This can be explained as follows

The colloidal sol particles are continuously bombarded with the molecules of the dispersion medium and hence they follow a zigzag, random, continuous movement.

I. To calculate Avogadro number.

II. To confirm kinetic theory which considers the ceaseless rapid movement of molecules that increases with increase in temperature.

III. To understand the stability of colloids:

As the particles in continuous rapid movement they do not come close and hence not get condensed. That is Brownian movement does not allow the particles to be acted on by force of gravity. 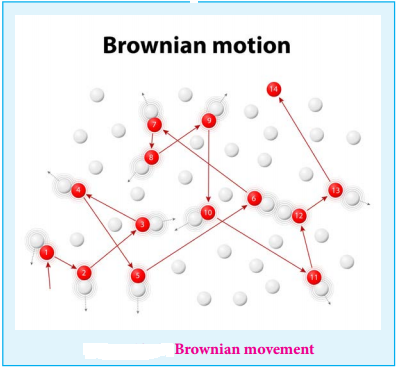 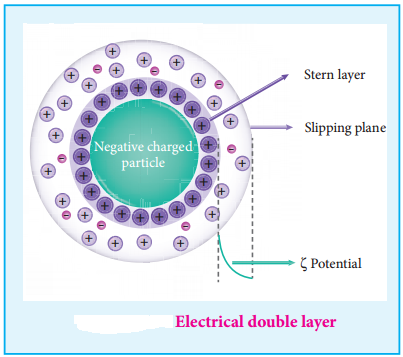 As the particles nearby are having similar charges, they cannot come close and condense. Hence this helps to explain the stability of a colloid.

When electric potential is applied across two platinum electrodes dipped in a hydrophilic sol, the dispersed particles move toward one or other electrode. This migration of sol particles under the influence of electric field is called electrophoresis or cataphoresis. 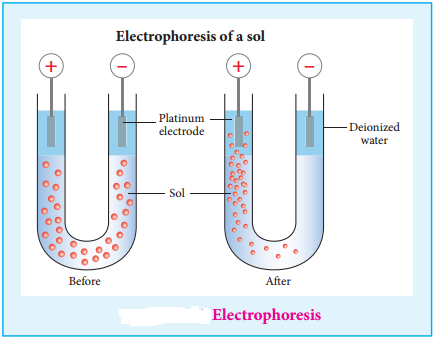 Few Examples of Charges of Sols Detected by Electrophoresis are Given Below:

A sol is electrically neutral. Hence the medium carries an equal but opposite charge to that of dispersed particles. When sol particles are prevented from moving, under the influence of electric field the medium moves in a direction opposite to that of the sol particles. This movement of dispersion medium under the influence of electric potential is called electro osmosis.

The flocculation and settling down of the sol particles is called coagulation.
Various method of coagulation are given below:

In the electrophoresis, charged particles migrate to the electrode of opposite sign. It is due to neutralization of the charge of the colloids. The particles are discharged and so they get precipitated.

When colloidal sols with opposite charges are mixed mutual coagulation takes place. It is due to migration of ions from the surface of the particles.

When boiled due to increased collisions, the sol particles combine and settle down.

A small amount of gelatine sol is added to gold sol to protect the gold sol.

Zsigmondy introduced the term ‘gold number’ as a measure of protecting power of a colloid. Gold number is defined as the number of milligrams of hydrophilic colloid that will just prevent the precipitation of 10ml of gold sol on the addition of 1ml of 10% NaCl solution. Smaller the gold number greater the protective power.