You can also practice NCERT Solutions for Class 6 History Chapter 8 Questions and Answers on LearnInsta.com.

Question 1.
When was Maury an Empire founded?
Answer:
About 2300 years ago.

Question 5.
Name the capital of the Mauryan Empire.
Answer:
It was Pataliputra.

Question 7.
What do you understand about ‘dynasty’?
Answer:
When members of the same family become rulers one after another, the family is often called a dynasty.

Question 11.
What do you understand about ‘Tribute’?
Answer:
Tribute was unlike tax and it was collected as and when it was possible from people who gave a variety, of things, more or less willingly.

Question 12.
Who was Megasthenes?
Answer:
Megasthenes was an ambassador who was sent to the court of Chandragupta by the Greek ruler Seleucus Nicator.

Question 13.
How many towers were there in Pataliputra as per Megasthenes?
Answer:
In Pataliputra, there were 570 towers.

Question 3.
What was written by Megasthenes about Pataliputra?
Answer:
About Pataliputra, he wrote:
“Pataliputra is a large and beautiful city; it is surrounded by a massive wall. It has 570 towers and 64 gates. The houses of two and three storeys are built of wood and mud brick. The king’s palace is also of wood, and decorated with stone carvings. It is surrounded with gardens and enclosures for keeping birds.

Question 4.
What was Ashoka’s dhamma?
Answer:
Ashoka’s dhamma did not involve worship of a god, or performance of a sacrifice. He felt that just as a father tries to teach his children, he had a duty to instruct his subjects.

Question 5.
What was the duty of dhamma mahamattas?
Answer:
Dhamma mahamattas were appointed for the teaching of the people in the regime of Ashoka. They went from place to place teaching people about dhamma.

Question 6.
Which work of Ashoka indicates that he was a humanitarian?
Answer:
He built roads, dug wells and built rest houses etc. Apart from these works, his most humanitarian works were arrangement for medical treatment not only for the human beings but also for the animals.

Question 1.
What was written by Megasthenes about the Emperor?
Answer:
Megasthenes wrote that:
“The occasions on which the emperor appears in public are celebrated with grand royal processions. He is carried in a golden palanquin. His guards ride elephants decorated with gold and silver. Some of the guards carry trees on which live birds, including a flock of trained parrots, circle about the head of the emperor.

The king is normally surrounded by armed women. He is afraid that someone may try to kill him. He has special servants to taste the food before he eats. He never sleeps in the same bedroom for two nights.”

Question 2.
How did Ashoka become a great emperor?
Answer:
Ashoka became a great emperor because he was a wise and kind person and he had done many work for the welfare of general public. First time, Something was arranged for the treatment of the ill people. He also made arrangements for the treatment of animals. He tried to take his message to the people through inscriptions. He also tried to sort out the matter of conflicts. The most important work done by Ashoka was to give up the war after winning the Kalinga.

Question 3.
What was the message given by Ashoka for the betterment of society?
Answer:
People performed a variety of rituals when they fell ill, children got married, children were bom or when they started journey. Ashoka thought that rituals were not useful. People should observe other practices, these are:

Question 4.
Why did Ashoka give up wars after winning Kalinga?
Or
Why did Ashoka adopt dhamma?
Answer:
In this regard, Ashoka wrote in his inscriptions that he saw about 1.5 lakh people were captured and more than one lakh were killed in Kalinga war, this filled him with sorrow. The people who were kind to their relatives and friends died or lost their loved ones. That is why, he was sad and decided to observe dhamma. He decided on no war for winning.

Picture Based Questions Class 6 History Chapter 8 Ashoka, The Emperor Who Gave Up War

(a) Do you know what is this picture is called?
(b) From where is it taken?
(c) What is importance of this?
Answer:
(a) This is known as emblem
(b) This has been taken from a massive stone pillar situated at Sarnath near to the Varanasi, Uttar Pradesh. This is an upper part of stone wherein four lions are made.
(c) This is adopted as a national symbol. Government of India is using this as Logo. This symbol is used on stamp papers, letter heads of Members of Parliament, President and Vice President of India and many more dignitaries and on each Indian currency whether it is in form of papers or coins. 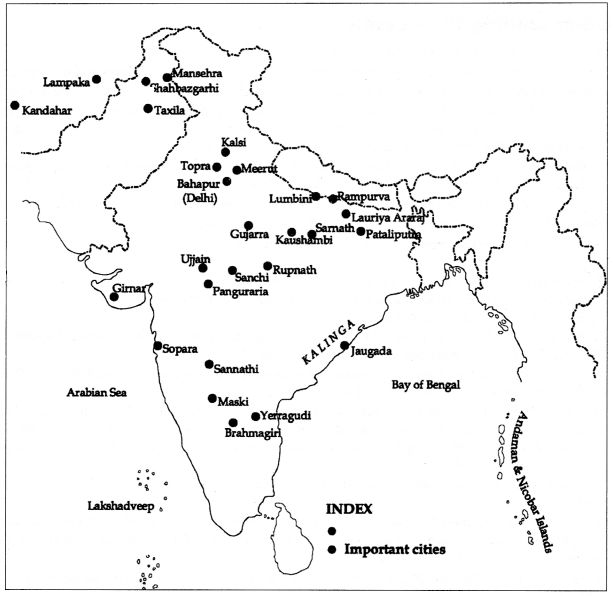