Chapter 4 Structure of the Atom Class 9 Science Important Questions with Answers PDF will help you in scoring more marks in your exams.

Question 1.
J. Chadwick discovered a sub-atomic particle which has no charge but has mass nearly equal to that of a proton. Name the particle and give its location in an atom. (CBSE 2011)
Answer:
The information suggests that the particle discovered by Chadwick is neutron. It is denoted by the symbol 10n. It is located in the nucleus of an atom along with proton.

Question 2.
If ‘K’ and ‘L’ shells of an atom are completely filled, then what would be

Answer:
According to Bohr Bury scheme, ‘K’ and ’L’ shells of an atom can have maximum of 2 and 8 electrons respectively. If these are completely filled, this means that :

Question 7.
In the following table, the mass number and the atomic number of certain elements are given :

(a) Select the pair of isobars from the above table.
(b) What would be the valency of the element C listed in the above table ?
(c) Which two sub-atomic particles are equal in number in a neutral atom ? (CBSE 2011)
Answer:
(a) Elements D and E are pair of isobars since they have same mass no. = 40
(b) The electronic configuration of the element C with Z = 7 is 2, 5.
It has five valence electrons. Its valency can be either 5 or 3 (8 – 5) = 3.
(c) In a neutral atom, the number of electrons in the extra-nuclear portion is equal to the number of protons in the nucleus.

Question 8.
(a) Why are the chemical properties of the isotopes same ?
(b) Draw Bohr model for helium atom.
(c) What are the number of protons, neutrons and electrons in 5927Co and 10847Ag ? (CBSE 2011)
Answer:
(a) Isotopes have the same atomic number as well as the same electronic configuration. Therefore, their chemical properties are the same.
(b) 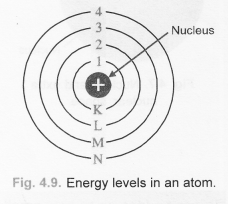 Question 9.
(a) Which popular experiment is shown in the figure ? 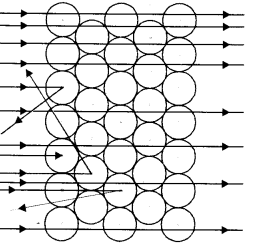 (d) The main features are listed as follows :

Question 10.
There are two elements 2613A and 2614B. Find the number of sub-atomic particles in each of these. What is the relation between these atoms ?
Answer:

Since the two elements have same mass number hut different atomic numbers, these are related to each other as isobars.

Question 12.
State the postulates stated by Neils Bohr in order to overcome the objection as raised against Rutherford’s model of atom.
Answer:
The main postulates of the theory are listed :

Question 18.
Define the terms (a) isotope, (b) isobar giving one example in each case. Name the element whose isotope is used in
(i) nuclear reactor,
(ii) treatment of cancer. (CBSE 2012)
Answer:
(a) Most of the elements exist in nature. An investigation of some of these have revealed that the atoms of a particular element may have different mass numbers. However, their atomic numbers are the same. These are called isotopes. Thus, isotopes may be defined as : the different atoms of the same element having same atomic number but different mass numbers.
(b)  Isobars may be defined as : the atoms belonging to the different elements with same mass numbers but different atomic numbers.
(i) U-235 isotope is used in nuclear reactor as a fuel.
(ii) Co-60 isotope is used in the treatment of cancer.

Question 21.
Who discovered protons ?
Answer:
Protons were discovered by Goldstein.

Question 25.
The total number of nucleons in the atoms of calcium and argon is 40 and the atomic numbers of calcium and argon are 20 and 18 respectively. Name the pair of these two elements and also find out the number of neutrons present in the nucleus of argon atom. (CBSE 2013)
Answer:
The elements which have same no. of nucleons but different atomic numbers are called isobars. Therefore, calcium (Ca) and argon (Ar) represent a pair of isobars.
No. of neutrons in the nucleus of Ar = 40 – 18 = 22.

Question 26.
Atom of an element has one proton, one electron and no neutron. Name the element. How will you represent it ? (CBSE 2013)
Answer:
The element is called protium or hydrogen. It is represented as j H

Question 29.
The electronic configuration of potassium (K) is 2,8,8, 1 instead of 2,8,9 though the M shell can accommodate up to 18 electrons. Explain. (CBSE 2014)
Answer:
M-shell cannot have more than 8 electrons in case it happens to be outermost or valence shell in an atom. Therefore, the correct electronic configuration of the element potassium (K) is 2,8,8,1.

Question 31.
The composition of two atoms A and B is given :

Question 35.
(a) Why does helium have zero valency ?
(b) Name the scientist and his experiment to prove that nucleus of an atom is positively charged.
(CBSE 2015)
Answer:
(a) Atomic number (Z) of helium is 2. Its electronic configuration is K(2). This means that its atom has completely filled shell which is the only shell it has. Therefore, valency of the element is zero.
(b) The scientist is Rutherford and the experiment is known as α-particle scattering experiment.

Question 36.
List the observations in α-particle scattering experiment which led Rutherford to make the following conclusions :
(i) Most of the space in an atom is empty,
(ii) Whole mass of an atom is concentrated in its centre.
(iii) Centre is positively charged. (CBSE 2015)
Answer:
(i) As most of the alpha particles passed through undeflected, this means that they did not come across any obstruction in their path. Thus, most of the space in an atom is expected to be empty.
(ii)  As a few alpha particles suffered minor deflections and a very few major deflections, this means that these must have met with some obstructions in their path.
This obstruction must be :

(iii) Positively charged : Alpha particles have positive charge. Since they were repelled or deflected back, the obstruction must also carry same charge i.e., positive charge, (similarly charged particles always repel each other).

Question 38.
Write the two postulates of Thomson’s model of an atom. What were the drawbacks in this model ?
(CBSE 2015)
Answer:

Question 40.
Identify the most stable atom from the following. Also give the reason for your answer :

Hope given Previous Year Question Papers for CBSE Class 9 Science Chapter 4 Structure of the Atom are helpful to complete your science homework.