Do you know that our blood maintains a constant pH, irrespective of a number of cellular acid – base reactions. Is it possible to maintain a constant hydronium ion concentration in such reactions? Yes, it is possible due to buffer action.

To resist changes in its pH on the addition of an acid (or) a base, the buffer solution should contain both acidic as well as basic components so as to neutralize the effect of added acid (or) base and at the same time, these components should not consume each other. Let us explain the buffer action in a solution containing CH3COOH and CH3COONa. The dissociation of the buffer components occurs as below.

If an acid is added to this mixture, it will be consumed by the conjugate base CH3COO– to form the undissociated weak acid i.e, the increase in the concentration of H+ does not reduce the pH significantly.

If a base is added, it will be neutralized by H3O+, and the acetic acid is dissociated to maintain the equlibrium. Hence the pH is not significantly altered.

These neutralization reactions are identical to those reactions that we have already discussed in common ion effect.

Les us analyse the effect of the addition of 0.01 mol of solid sodium hydroxide to one litre of a buffer solution containing 0.8 M CH3COOH and 0.8 M CH3COONa. Assume that the volume change due to the addition of NaOH is negligible. (Given: K4 for CH3COOH is 1.8 × 10-5).

The dissociation constant for CH3COOH is given by

Calculation of pH after adding 0.01 mol NaOH to 1 litre of buffer.

Caluculation of pH after adding 0.01 mol NaOH to 1 litre of buffer.

Given that the volume change due to the addition of NaOH is negligible
∴ [OH–] = 0.01 M.

The consumption of OH– are expressed by the following equations. 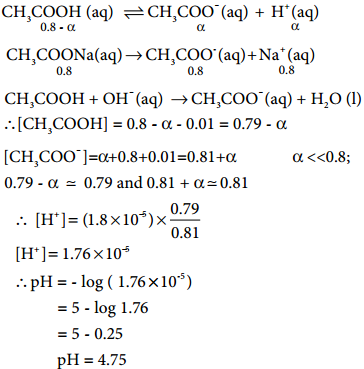 Here [acid] and [salt] represent the initial concentration of the acid and salt, respectively used to prepare the buffer solution. Taking logarithm on both sides of the equation