Question 3.
What is called the eye of the storm?
Answer:
The centre of a cyclone.

Question 4.
From which wind is the word monsoon derived?
Answer:
The Arabic word ‘mausam’.

Question 5.
What does the word ‘mausam’ mean?
Answer:
Season

Question 6.
What do the wind, from the oceans carry?
Answer:
Water

Question 7.
What bring rain?
Answer:
The winds from the oceans carry water and brings rain.

Question 8.
What are monsoon winds?
Answer:
The winds from the oceans carry water and bring rain. These winds are called monsoon winds.

Question 11.
Why does the can with hot water get distorted?
Answer:
Due to air pressure.

Question 12.
What is the direction of winds in summer?
Answer:
From the ocean towards the land

Question 13.
What is the direction of winds in winter?
Answer:
From the land to the ocean.

Question 16.
Which instrument is used to measure the air pressure at any place?
Answer:
Barometer

Question 17.
Which instrument does measure the wind speed?
Answer:
Anemometer

Question 20.
Which instrument is used to measure the direction of the wind?
Answer:
Wind vane

It was accompanied by water waves about 9 m high. It was very destructive. Thousands of people lost their lives. Property worth crores of rupees was destroyed. The cyclone affected agriculture, transport, communication and electricity supply.

Question 2.
When we pour cold water over the can half-filled with hot water, the can slowly gets crumpled, why?
or
Show with the help of an activity that air exerts pressure.
Answer:
Take a tin can. Fill it half with water. Boil the water. After the water gets boiled, remove the can from the flame and immediately close the mouth of the can tightly. Place it in a sink and pour cold water over it. The tin can slowly gets crumpled.

This is due to the fact that when we cover the can and pour water over it, the steam condenses to form water reducing the amount of air inside. The air pressure outside the can is more than that inside the can. That is why the can gets distorted. This shows that the air exerts pressure.

Question 5.
What is thunderstorm?
Answer:
The rising temperatures produce strong upward rising winds. These winds carry water droplets upwards, where they freeze, and fall down again. The swift movement of the falling water droplets along with the rising air create lightning and sound. It is this event that is called thunderstorm. It develops in hot, humid tropical areas like India very frequently.

Question 6.
What is a tornado? Describe.
Answer:
A tornado is a dark funnel-shaped cloud that reaches from the sky to the ground. Its diameter can be as small as a metre or even wider. The funnel of a tornado sucks dust, debris and everything near it at the base and throws them out near the top. Most of the tornadoes are weak. A violent tornado can travel at speed of about 300 km/h. Tornadoes may form within cyclones. In our country they are not very frequent.

Question 1.
Explain with the help of an activity that air expands on heating and contracts on cooling.
Answer:
See the ‘NCERT Intext Activity 8.5’.

Question 2.
Give an activity to show that warm air is lighter than cold air.
Answer:
See the ‘NCERT Intext Activity 8.6’.

Question 3.
Explain how are wind currents generated due to uneven heating between the equator and the poles.
Answer:
The areas close to the equator get maximum heat from the sun. As a result, the air in these regions gets warm. The warm air moves upwards and the cooler air from the regions in the 0-30° latitudes belt on either side of the equator moves in.

These winds blow from the north and south towards the equator. At the poles the air is colder than that at latitudes about 60 degrees. The warm air at these latitudes rises up and cold wind from the polar regions rushes in, to take its place. In this way, wind circulation is set up between these poles and the warmer latitudes as shown below (Fig. 8.10). 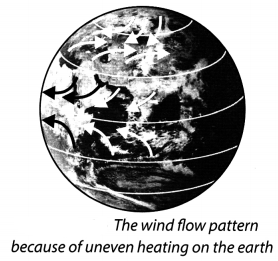 Question 4.
How do cyclones cause destruction?
Answer:
Cyclones cause destruction to our life and property. The water waves produced by the wind are so powerful that a person cannot overcome them. The rising water may be as high as 3-12 metres. It moves towards the shore. As a result, the sea-water enters the low-lying coastal areas, causing severe loss of life and property.

It also reduces the fertility of the soil. High-speed winds accompanying a cyclone can damage houses, telephones and other communication systems, trees, etc., causing tremendous loss of life and property. Continuous rainfall may further worsen the flood situation.

More air moves to the centre of the storm. This process is repeated. The chain of events ends with the formation of a very low-pressure system with very high-speed winds revolving around it. It is this weather condition that we call a cyclone. Various factors like wind speed, wind direction, temperature and humidity contribute to the development of a cyclone. 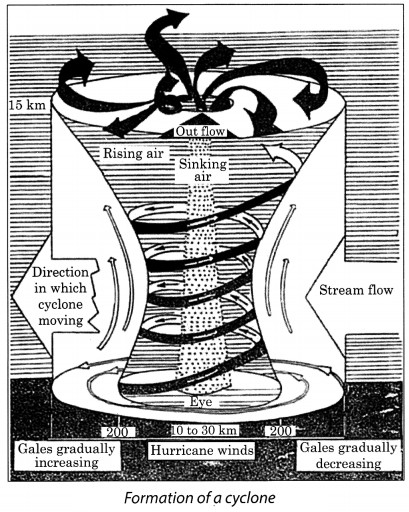 (b) Measures to be taken on the part of the public:

Some other precautions should be taken, if staying in a cyclone hit area as:

Question 5.
During lightning and thunderstorm, one should not take shelter under a tree or lie on the ground. Why?
Answer:
Tree may be the tallest object around, making it perfect target of lightning and one of the worst place to seek shelter. If we lie down, an electrical current passing through the ground from a nearby lightning strike can pass right through our body. So the above two positions may prove fatal in case lightning strike.

Question 6.
Suggest some precautions to be taken to prevent the roof of a tin sheet from flying away during a fierce wind storm.
Answer:

Question 1.
Ramaya while going to school found his bicycle’s tyres to be little deflated. He went to a cycle repairing shop and overfilled his bicycle tube. On seeing this, the shopkeeper adviced him that this is not good for his cycle tube. But Ramaya overlooked shopkeeper’s advice and went to his school. He kept his cycle in the cycle stand.
In afternoon when he came to take his cycle, he observed that its tyre has bursted. He got puzzled why his tyres bursted though they were new.
(a) What is air pressure?
(b) What will happen if we use our bicycle with deflated tyres?
(c) Ramaya went to his school with overfilled tyre tubes but nothing happened to his tyres then. Why did it burst when he was not riding and just kept it in cycle stand?
(d) What value of Ramaya is shown here?

Answer:
(a) Air pressure is the force exerted onto a surface by the weight of the air.
(b) Deflated tyres make moving the bicycle harder and also wear and tear of the tyres soon.
(c) The temperature is maximum in afternoon and the heat of the sun warm the air inside the tube, thus rising its pressure to such an extent which caused the tyre to burst.
(d) Ramaya is inexperienced, he overheard the advice of shopkeeper so he is disobedient also. He lacks scientific knowledge on expansion of air.

Answer:
(a) Exhaust fan fitted by Ali will expel the hot air more effectively because hot air has tendency to move up.
(b) The hot and stale air being lighter rises up and get exhausted through the ventilators. The fresh and cold air being heavier than warm air takes its place. So by this way ventilators helps in circulating fresh air within a house.
(c) Saket is impractical whereas Ali is intelligent and practical in placing the exhaust fan at right place.