Two main theories to explain the mechanism of vernalization are:

According to Lysenko, development of an annual seed plant consists of two phases. First phase is thermostage, which is vegetative phase requiring low temperature and suitable moisture. Next phase is photo stage which requires high temperature for synthesis of florigen (flowering hormone). 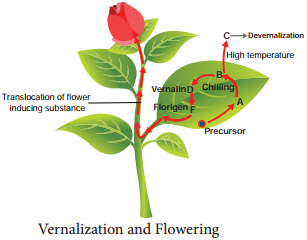 The seeds are first soaked in water and allowed to germinate at 10°C to 120°C. Then seeds are transferred to low temperature (3°C to 5°C) from few days to 30 days. Germinated seeds after this treatment are allowed to dry and then sown. The plants will show quick flowering when compared to untreated control plants.

Vernalization (from Latin vernus, “of the spring”) is the induction of a plant’s flowering process by exposure to the prolonged cold of winter, or by an artificial equivalent. This ensures that reproductive development and seed production occurs in spring and winters, rather than in autumn.

Plants often flower in the spring, so, in practical terms, vernalization is the promotion of flowering in response to prolonged low temperatures. This response evolved in plants that adapted to regions where the winters are harsh and the growing season relatively short.

Some examples include beets, onions, winter wheat, cabbage, and turnips. In order to produce flowers and seeds, these plants have to go through a process called vernalization. Vernalization simply means that the plant has to experience a period of cold before it can produce flowers.

In laboratory experiments vernalization occurs at constant temperatures in growth rooms set to between 0 and around 15°C. But real winter temperatures are not constant, and daily fluctuations outside during day and night often exceed the difference in seasonal average temperatures.

Vernalization (from Latin vernus, “of the spring”) is the induction of a plant’s flowering process by exposure to the prolonged cold of winter, or by an artificial equivalent. Typical vernalization temperatures are between 1 and 7 degrees Celsius (34 and 45 degrees Fahrenheit).

Vernalization, the artificial exposure of plants (or seeds) to low temperatures in order to stimulate flowering or to enhance seed production. By partially germinating the seed and then chilling it to 0° C (32° F) until spring, it is possible to cause winter wheat to produce a crop in the same year.

Vernalization is the acquisition of a plant’s ability to flower in the spring by exposure to the prolonged cold of winter, or by an artificial equivalent. After vernalization, plants have acquired the ability to flower, but they may require additional seasonal cues or weeks of growth before they will actually flower.

The site that perceives the cold stimulus can be different in different plants. It could be the apical meristem in the shoots, the germinating seed or the vegetative parts such as leaves.

Many types of plants have vernalization requirements. Many fruit trees, including apples and peaches, require minimum chilling times each winter to produce a good crop. Too warm winters can damage the trees health or even kill them over time.

In absence of cold treatment, accumulation of ent-kaurenoic acid in shoot tip occurs. Cold treatment followed by exposure to high temperatures convert it into GA9, which stimulates flowering response in plants. Thus, gibberellins can substitute the vernalization.

Gibberellins affect several reproductive processes in plants. They stimulate flowering, particularly in long-day plants. In addition, gibberellins substitute for the low temperature that biennials require before they begin flowering (vernalisation).