The gas laws have played a major role in the development of chemistry. The physical properties of all gases are governed by the gas laws that were formulated based on the studies of the properties like pressure, volume, etc., as a function of temperature. Before studying the gas laws in detail, let us understand an important parameter, namely, the pressure.

Pressure is defined as force divided by the area to which the force is applied. The SI unit of pressure is pascal which is defined as 1 Newton per square meter (Nm-2). There are other units that are commonly used and their relation with the SI unit is as follows. 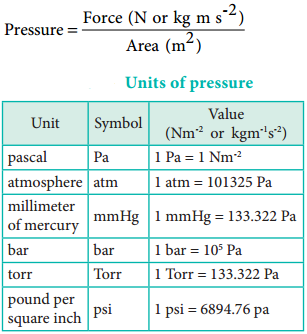 Robert Boyle performed a series of experiments to study the relation between the pressure and volume of gases. The schematic of the apparatus used by him is shown in figure 6.1. 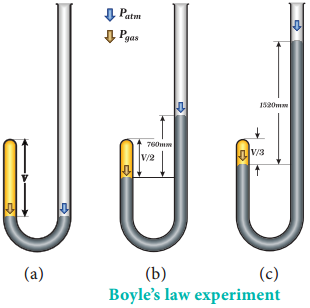 Mercury was added through the open end of the apparatus such that the mercury level on both ends are equal as shown in the figure 6.1 (a). Add more amount of mercury until the volume of the trapped air is reduced to half of its original volume as shown in figure 6.1(b). The pressure exerted on the gas by the addition of excess mercury is given by the difference in mercury levels of the tube.

Mathematically, the Boyle’s law can be written as

(T and n are fixed, T-temperature, n- number of moles)

Boyle’s law is applicable to all gases regardless of their chemical identity (provided the pressure is low). Therefore, for a given mass of a gas under two different sets of conditions at constant temperature we can write 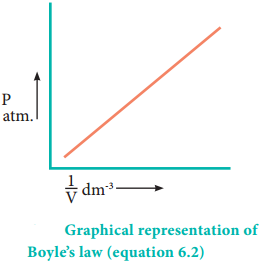 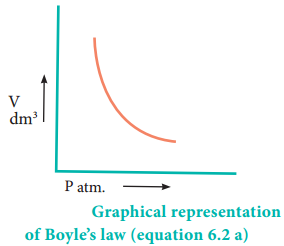 The PV relationship can be understood as follows. The pressure is due to the force of the gas particles on the walls of the container. If a given amount of gas is compressed to half of its volume, the density is doubled and the number of particles hitting the unit area of the container will be doubled. Hence, the pressure would increase two fold.

In other words, the density of a gas is directly proportional to pressure. The relationship between volume of a gas and its temperature was examined by J. A. C. Charles. He observed that for a fixed mass of a gas at constant pressure, the volume is directly proportional to its temperature (K). Mathematically it can be represented as (at constant P and n)
V = kT ………….. (6.5)
or \(\frac{V}{T}\) = Constant

If the temperature of the gas increases, the volume also increases in direct proportion, so that \(\frac{V}{T}\) is a constant. For the same system at constant pressure, one can write

For example, if a balloon is moved from an ice cold water bath to a boiling water bath, the temperature of the gas increases. As a result, the gas molecules inside the balloon move faster and gas expands. Hence, the volume increases. 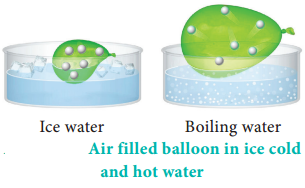 Variation of Volume with Temperature at Constant Pressure

V = mT + C where T is the temperature in degree Celsius and m & C are constants.

When T = 0ºC the volume becomes V0 = C and slope of the straight line m is equal to ΔV/ΔT. Therefore the above equation can be written in the following form. 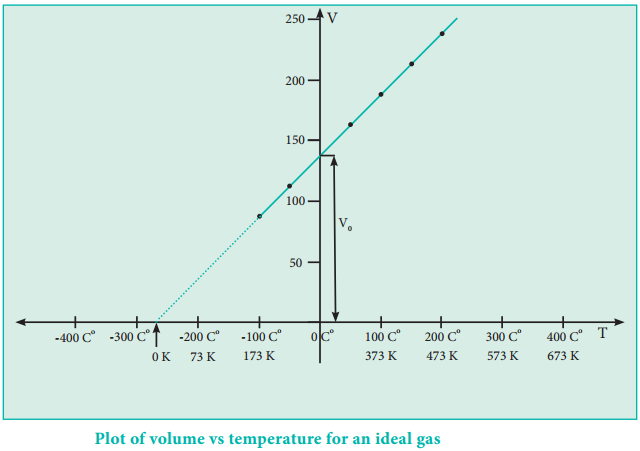 Charles found that the coefficient of expansion is approximately equal to 1/273. It means that at constant pressure for a given mass, for each degree rise in temperature, all gases expand by 1/273 of their volume at 0ºC 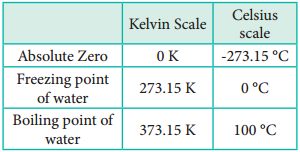 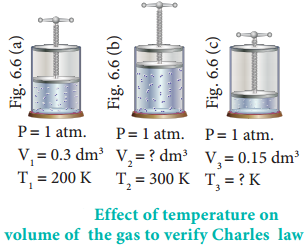 According to Charles law, 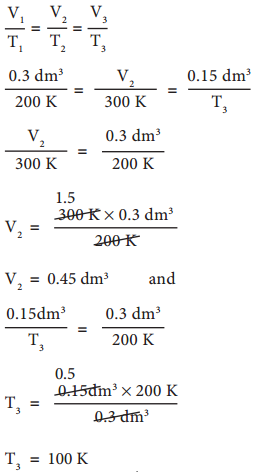 Joseph Gay-Lussac stated that, at constant volume the pressure of a fixed mass of a gas is directly proportional to temperature. or \(\frac{P}{T}\) = Constant k

If P1 and P2 are the pressure at temperatures T1 and T2, respectively, then
from Gay Lussac’s law

Avogadro hypothesised that equal volumes of all gases under the same conditions of temperature and pressure contain equal number of molecules. The mathematical form of Avogadro’s hypothesis may be expressed as