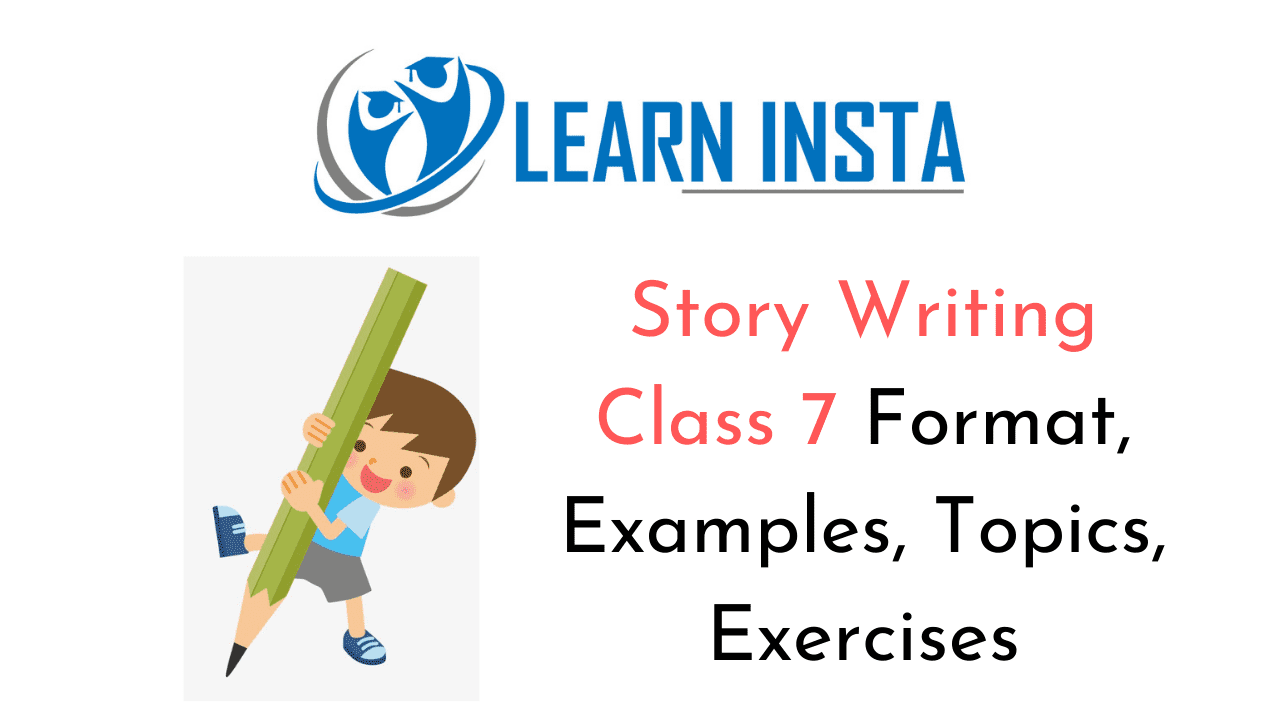 Story writing is an art. It is the oldest form of written composition. It is a work of imagination that is written in easily understandable grammatical structure. a short story is meant to be read in a single sitting and therefore it should be as direct and brief as possible.

Format:
A Notice should be written in the following format:

Answer:
Once a bear, a wolf and a fox went hunting under the leadership of a lion. Very soon they caught and killed a buffalo. The fox divide the buffalo into four parts. The animals were eagerly waiting to eat their shares.

The bear, the wolf and the fox let the lion have all the four parts of the prey and walked away quietly.

The Country Mouse and the Town Mouse

Answer:
A Country mouse lived in a field. A Town mouse friend. One day the country mouse invited the town mouse for/on dinner. He served his guest the season’s best berries, nuts and roots. But the Town mouse did not like the simple country food. He said to the country Mouse, “Excuse me for be ing frank. Your country food is poor and tasteless. You must come to my house and see what good food is like.

The country mouse accepted the invitation of the Town Mouse. He went to the town. His friend served him figs, dates, honey, biscuits, bread and jam, and what not. The food was really rich and delicious.

But the two mice could not eat peacefully in the town. Suddenly a cat came there and the mice had to run for their life. The hole for their shelter and hiding was very small and uncomfortable. “What a miserable life you have!” Said the country mouse. “Back home, I can at least eat peacefully.” He was really happy to return to his field in the country.

Riches Do Not Always Bring Happiness.

The Cat and the Fox

Answer:
Once a cat and a fox were discussing about hounds.
“They are swift runners,” said the fox, “but they can’t catch me, I know many tricks to get rid from them.”
“What tricks can you perform?” asked the cat. “A lot of tricks,” boasted the fox. “I can run along a thorny hedge. I can hide amidst thick bushes. I can hide in burrows. These are only a few of the many tricks that I can perform, “said the fox. “I know only one good trick,“ the cat, knew only one trick.
“How sad! Only one trick? What is it?” asked the fox.
“I am going to do it just now. Look out, the hounds are coming,” said the cat and ran up a nearby tree. To be safe from the hounds. The hounds chased the fox. He tried one trick after another. But the hounds caught him at last and killed him.
“My one trick is better them all the tricks of the poor fox,” said the cat.

The Farmer and his sons

Answer:
A farmer had five sons. They were strong and hardworking. But they always quarreled with one another. Sometimes, they even fought with one another. The farmer wanted his sons to stop quarreling and fighting. He wanted them to live in peace. Plain words of advice or rebuke did not have much effect on these young people.

The farmer always thought about what to do to keep his children united. One day he found an answer to his problem. So he called all his sons together. He showed them a bundle of sticks and said, “I want any of you to break these sticks without separating them from the bundle.” Each of the five sons tried one by one. They used their full strength and skill. But none of them could break the sticks.

Then the old man separated the sticks and gave each of them just a single to break. They could break the sticks easily.

The farmer said, “a single stick by itself is weak. It is strong as long as it is tied up in a bundle. Likewise, you will be strong if you are united. You will be weak if you are divided.”

The Wind and the Sun

Answer:
Once the wind and the sun had an argument.
“I am stronger than you,” said the Wind.
“No, you are not,” said the Sun
Just at that moment they saw a traveller walking across the world. He was wrapped in a cloak. The Sun and the wind agreed that whosoever of them could separate the traveller from his cloak should be declared the stranger. The wind took the first turn. He blew with all his might to tear the traveller’s cloak from his shoulders.

But the harder he blew, the tighter the traveller gripped the cloak to his body. The struggle went on till the wind’s turn was over.

Now it was the Sun’s turn. The Sun smiled warmly. The traveller felt the warmth of the smiling Sun. Soon he let the cloak fall open. The Sun’s smile grew warmer and warmer ……. hotter and hotter. Now the traveller no longer needed his cloak. He took it off and dropped it on the ground. The Sun was declared stronger than the wind.

Answer:
In a grocer’s shop there lived many mice. There was plenty of food for them in the shop. They ate grains and dry fruits, bread and biscuits, jam and cheese.

The grocer suffered heavy losses because of the mice. He said to himself, “I must do something to get rid of the mice or some day they will be the end of me.”

One day the grocer brought a big, fat cat to the shop. Now the mice could not move about freely. Every day the cat would catch and kill some of them.

The mice were worried. They held a meeting. All of them said, “We must get rid of the cat some how.” But what could they do? They had no answer.

Then a smart mouse stood up and said, “The cat moves very softly and swiftly. she takes us unawares. We must tie a bell round her neck.”

Another mouse seconded him, “The bell will ring, when the cat moves. So it will be possible for us to keep at a safe distance from her.”

All the mice welcomed the suggestion with a loud cry of ‘Hurrah!

Then an old mouse stood up and said, “Stop this rejoicing. Can you tell me who will bell the cat?” And all of them quiet. They had no answer.

The Cock and the Fox

Answer:
Once a fox saw a cock sitting high up on a tree. “What a good meal he could be for me!” thought the fox. But he could not climb up a tree. He wanted the cock to come down on the ground.

So the fox sat under the tree and said, “Hello, cock. I have some good news for you. There is an order from Heaven. Now all the birds and beasts shall live as friends. They shall not eat each other. Foxes shall not eat cocks and hens. So you need not be afraid of me now. Please come down. We shall sit and talk together.”

The cock said, “That good news indeed. I can see some of friends coming to meet you.”

The fox asked in surprise, “My friends? Who are they?”
The cock said “Hounds.”
The word ‘hounds’ filled the fox with fear. He sprang up on his four legs.
The cock said, “why should you be afraid of them? We all are friends now.”
“I know that,” said the fox. “But, perhaps, hounds do not know this.”
And soon the fox ran away as fast as his legs could carry him.

Johnny and the Barber

Answer:
In a forest there was a crooked tree. Its trunk and branches were odd-snapped. All the other trees around were straight and sharp. The crooked tree looked at them and said, “How fine and straight they are!” Then it added in a sad voice, “How unlucky I am! Why should I alone be crooked and ugly?”

One day a woodcutter came to the forest. He looked at the crooked tree and said, “This tree is absolutely useless for me.” He selected all the fine and straight trees and cut them down.

Thereafter the crooked tree never felt sad for its ugliness. In fact, its ugliness had saved it from the axe of the woodcutter.

Answer:
Once two women had a quarrel over a small baby. Each claimed that she was the mother of the child. They were brought before a judge.
The judge listened to both the women. It was really a difficult case to decide. The judge was con fused.
After thinking deeply, the judge found out the solution. He ordered one of his men, “Cut the child into two parts. Let each women have one part.”
On hearing the judge’s order, one of the women screamed out and loudly and said, “Mercy, Your Lordship. Let that woman have the baby. Let the poor thing live. I give up my claim to it.”
The other woman remained quiet. The wise judge recognized the real mother. He gave the baby to the woman who was ready to give up her claim. He sent the other woman to jail.