This kind of senescence occurs in annual plants when entire plant gets affected and dies. Example: Wheat and Soybean. It also occurs in few perennials also. Example: Agave and Bamboo.

It occurs in aerial parts of plants. It is common in perennials, underground and root system remains viable. Example: Banana and Gladiolus.

It is common in deciduous plants and occurs only in leaves of plants, bulk of the stem and root system remains alive. Example: Elm and Maple.

This kind of senescence is gradual. First it occurs in old leaves followed by new leaves then stem and finally root system. It is common in annuals (Figure 15.13). 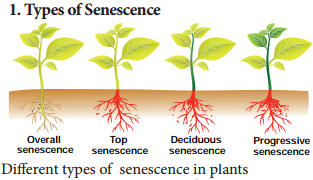 Senescence is controlled by plants own genetic programme and death of the plant or plant part consequent to senescence is called Programmed Cell Death. In short senescence of an individual cell is called PCD. The proteolytic enzymes involving PCD in plants are phytaspases and in animals are caspases. The nutrients and other substrates from senescing cells and tissues are remobilized and reallocated to other parts of the plant that survives.

The protoplasts of developing xylem vessels and tracheids die and disappear at maturity to make them functionally efficient to conduct water for transport. In aquatic plants, aerenchyma is normally formed in different parts of the plant such as roots and stems which encloses large air spaces that are created through PCD. In the development of unisexual flowers, male and female flowers are present in earlier stages, but only one of these two completes its development while other aborts through PCD (Figure 15.14). 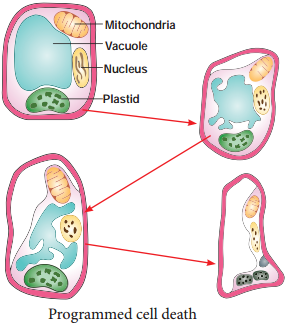 Abscission is a physiological process of shedding of organs like leaves, flowers, fruits and seeds from the parent plant body. When these parts are removed the plant seals of its vascular system to prevent loss of water and nutrients. Final stage of senescence is abscission.

6. Morphological and Anatomical Changes During Abscission

Leaf abscission takes place at the base of petiole which is marked internally by a distinct zone of few layers of thin walled cells arranged transversely. This zone is called abscission zone or abscission layer. An abscission layer is greenish-grey in colour and is formed by rows of cells of 2 to 15 cells thick.

The cells of abscission layer separate due to dissolution of middle lamella and primary wall of cells by the activity of enzymes pectinase and cellulase resulting in loosening of cells. Tyloses are also formed blocking the conducting vessels. Degrading of chlorophyll occur leading to the change in the colour of leaves, leaf detachment from the plant and leaf fall. After abscission, outer layer of cells becomes suberized by the development of periderm (Figure 15.15). 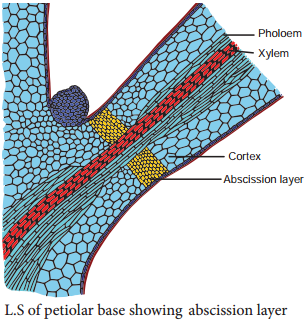 All naturally occurring hormones influence the process of abscission. Auxins and cytokinins retard abscission, while abscisic acid (ABA) and ethylene induce it.