Protozoan parasites characterised by the production of spore – like oocysts containing sporozoites were known as sporozoa. The parasites belonging to this group of protozoa do not possess any special organs of locomotion, such as flagella or cilia. The medically important parasite of this class that is given in the
text is malarial parasite.

It is the disease condition with seasonal intermittent fevers, chills and shivering. The name malaria (Mal: bad, aria: air) was given in the 18th century in Italy. The specific agent of malaria was discovered in RBC’s of a patient in 1880 by Alphonse Laveran.

In 1897, Ronald Ross identified the developing stages of malarial parasites in mosquitoes in Secunderabad, India. This led to various measures for the control and possible eradication of malaria by mosquito control. Both Ross (1902) and Laveran (1907) won the Nobel Prize for their discoveries in malaria.

The organisms: Four species of Plasmodium cause malaria in humans.

The two most common species are P. vivax and P. falciparum, WHO reports (2018) that falciparum being the most pathogenic of all.

Malarial parasites are found in all countries. In India, malaria continues to be a major public health threat.

The malarial parasites infecting man, after passing through a developmental phase in the parenchyma cells of the liver, reside inside the red blood corpuscles and are carried by the circulating blood to all the organs.

Human malaria is transmitted by over 60 species of female Anopheles mosquito.

Of all the human malaria parasites, P. falciparum is the most highly pathogenic and responsible for malignant tertian malaria. This is a form of disease which runs an acute course in non-immune patients and is frequently fatal if untreated.

The malaria parasite passes its life cycle in two different hosts and comprises of two phase as follows, 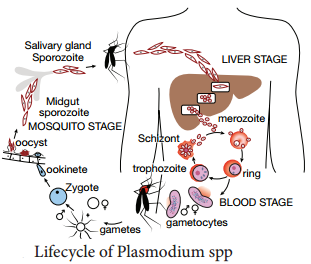 Human infection occurs when the sporozoites (the infective forms of the parasite are present in the salivary gland of the mosquito) are injected into blood capillaries when the mosquito feeds on blood after piercing the skin. The malarial parasite multiplies by division and the process designated as Schizogony (schizo: to split, gone: generation).

Sporozoites are minute thread-like curved organisms with tapering ends. Measuring 9-12µ in length with a central elongated nucleus while, the cytoplasm reveals no pigment as seen with a light microscope. In human, schizogony occurs in two locations. One in the red blood cells (erythrocytic schizogony) and other
in the liver cells (pre – or exoerythrocytic schizogony).

Liver:
The liver is enlarged. The organ becomes more firm and pigmented. Pigments are found in parenchymal cells.

Spleen:
The spleen is markedly enlarged. If the infection lasts over a long period, the spleen is usually grayish, dark brown or even black and is commonly known as ‘ague cake’. Bone marrow, Lungs, Kidneys and Brain are enlarged and pigmented. They are filled with parasitized erythrocytes.

Anemia is caused by destruction of large number of red cells by complement mediated and autoimmune hemolysis. It is also due to the increased clearance of both parasites and parasitized RBCs by the spleen.

The incubation period is generally 9-14 days but, it can be as short as 7 days. The most malignant form of malaria is caused by P. falciparum hence, variable clinical syndromes are associated with falciparum malaria. That include,

1. Prodromal (initial indication of the onset of disease) period:

Non – specific symptoms such as malaise (condition of general weakness or discomfort), myalgia
(severe muscle pain) headache and fatigue (feeling of tiredness) are usually seen during the prodromal period.

It is the classical manifestation of acute malaria. It is characterised by fever, chill and rigor (sudden feelings of cold with shivering).The fever is caused by rupture of red blood cells that contain malarial parasites. The fever occurs every 48 hours in falciparum malaria.

3. Anemia (A condition in which the blood does not have enough healthy Red Blood cells) and

4. Hepatosplenomegaly (simultaneously enlargement of both the liver and the spleen)

The symptoms are non – specific with headache, pains in back and limbs, anorexia, nausea and a feeling of chill rather than a distinct cold phase. Hyponatremia (A condition that occurs when the level of Sodium in the blood is too low) occur in both uncomplicated and severe malaria.

The syndrome is the manifestation of repeated infections of falciparum malaria, which were inadequately treated with quinine. The condition is associated with haemoglobinaemia (excess of hemoglobin in the blood plasma) and haemoglobinuria (excretion of free haemoglobin in the urine).

The syndrome is known as black water fever due to the dark red to brown – black appearance of the urine in this condition (Figure 8.13). It is dark due to presence of free haemoglobin as methaemoglobin or oxyhaemoglobin in it. Kidney failure is the immediate cause of death. Cerebral malaria is the most common presentation of severe malaria in adult. Cerebral malaria may be sudden in onset. Clinically, the condition manifests with fever for 4-5 days, slowly lapsing into coma, with or without convulsions.

It is marked by a severe headache, high fever even above 180°F, and changes in mental
status. Death may occur within few hours. Algid malaria and septicemic malaria are also other serious complication of falciparum malaria.

The term pernicious malaria is referred to as a series of phenomena that occur during the course of an in treated P. falciparum infection within 1 to 3 days.

In P. falciparum and P. malariae infections after the primary attack, sometimes there is a period of latency, during which there is no clinical illness. But some parasites persist in some erythrocytes and gradually increase in numbers.

Fresh malarial attacks then develop. It appears after a period of latency usually within weeks after the primary attacks. Persistence of the erythrocytic cycle of the parasites are called recrudescences. In P. falciparum infections, recrudescences are seen for 1-2 years, while in P. malariae infection, they may last for long periods, even upto 50 years.

P. vivax shows a similar life cycle in humans and mosquitoes like that of P. falciparum. Except in P. vivax, a latent tissue stage, the hypnozoites present in the liver parenchyma. Relapse in vivax malaria is caused by these hypnozoites. Hypnozoites are the dormant stages of the parasites.

These are single – nucleated parasites measuring 4µm-6µm in diameter. These become active and develop into tissue schizonts after a short period of dormancy. This relapse may occur at intervals up to 3 years or more after the first attack. P. vivax merozoites invade only young erythrocytes and the reticulocytes.

P. vivax is the most wide spread species causing malaria in man. However, unlike falciparum malaria, vivax malaria, is less severe and death from the condition relatively is less common. Table 8.2 describes the comparison of course of infection in Falciparum malaria with Vivax malaria

Conventional light microscopy of stained blood smear is the gold standard for confirmation of malaria. Thin smear They are prepared from capillary blood of fingertip and spread over a good quality slide by a second slide (spreader slide) held at an angle of 30°-45° from the horizontal such that a tail is formed. Thin smears thus prepared are air dried, fixed in alcohol and stained by one of the Romanowsky stains such as Leishman, Giemsa or JSB (Jaswant singh and Bhattacharjee) stain.

Thin smears are used for:

They are prepared usually with 3 drops of blood spread over a small area of about 10mm. The thick film is dried. This smears consist of a thick layer of dehemoglobinized (lysed) red blood cells. It is not fixed in methanol. Thick film is stained similar to thin film. Thick smears have the advantage of concentrating the parasites and therefore increase the sensitivity of diagnosis. Thick smears are used for:

The method is mainly used for mass screening in field laboratory. Fluorescent dyes like acridine orange is used to stain the blood smears. It stains DNA as fluorescent green and cytoplasmic RNA as red.

It is not helpful in clinical diagnosis. It is used mainly for epidemiological survey and to identify the infected donors in transfusion malaria. The test used are indirect haemagglutination (IHA), Indirect fluorescent antibody (IFA) and Enzyme – linked immunosorbent assay (ELISA) for the detection of serum antibodies.

Rapid Antigen detection tests kits are available commercially like the dipstick, card and cassette bearing monoclonal antibody. These tests are based on the detection of antigens using immune chromatographic methods. These tests can detect plasmodium in 15 minutes.

DNA probe and PCR are highly sensitive methods for the diagnosis of malaria. It is more sensitive than that of thick blood smear. It is highly species specific. Other tests includes the measurement of hemoglobin, total WBC and platelet count in severe falciparum malaria, urine can be tested for free hemoglobin, if black water fever is suspected. Blood urea and serum creatinine has to be monitored for renal failure.

The most commonly used drugs are Chloroquine, Quinine, Pyrimethamine and Doxycycline.

The preventive measures to control malaria mainly depend on treatment of infected individuals and reducing the transmission of malaria. The control measures include the use of insecticides such as DDT (Di chlorodiphenyl tri chloromethane) or Malathion for controlling the populations of adult mosquitoes.