Here, electron donor is hydrogen sulphide (H2S) and only one photosystem is involved (PS I) and the reaction centre is P870. Pigments present in bacteria are bacteriochlorophyll a, b, c, d, e and g and carotenoids. Photosynthetic bacteria are classified into three groups: 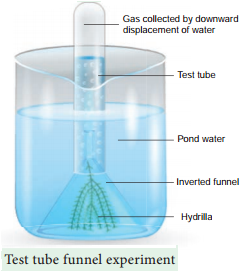 The main purpose of photosynthesis is to convert radiant energy from the sun into chemical energy that can be used for food. Cellular respiration is the process that occurs in the mitochondria of organisms (animals and plants) to break down sugar in the presence of oxygen to release energy in the form of ATP.

An example of photosynthesis is how plants convert sugar and energy from water, air and sunlight into energy to grow. The water from the leaves evaporates through the stomata, and filling its place, entering the stomata from the air, is carbon dioxide. Plants need carbon dioxide to make food.

In all phototrophic eukaryotes, photosynthesis takes place inside a chloroplast, an organelle that arose in eukaryotes by endosymbiosis of a photosynthetic bacterium (see Unique Characteristics of Eukaryotic Cells). These chloroplasts are enclosed by a double membrane with inner and outer layers.

The most influential bacteria for life on Earth are found in the soil, sediments and seas. Well known functions of these are to provide nutrients like nitrogen and phosphorus to plants as well as producing growth hormones. By decomposing dead organic matter, they contribute to soil structure and the cycles of nature.

Bacteria are classified into five groups according to their basic shapes: spherical (cocci), rod (bacilli), spiral (spirilla), comma (vibrios) or corkscrew (spirochaetes). They can exist as single cells, in pairs, chains or clusters.

Photosynthesis is the biochemical process in which energy from sunlight is converted by plants, algae, and some bacteria into sugars, which are used by the organism as food. However, there is a least one exception: a little bacterium deep under the Pacific Ocean which manages photosynthesis without sunlight.

According to the diagram of photosynthesis, the process begins with three most important non-living elements: water, soil, and carbon dioxide. Plants begin making their ‘food’, which basically includes large quantities of sugars and carbohydrate, when sunlight falls on their leaves.

The reactants for photosynthesis are light energy, water, carbon dioxide and chlorophyll, while the products are glucose (sugar), oxygen and water.