Question 1.
Fill in the blanks:

Question 2.
Differentiate between the following:

Question 3.
Discuss the effects of deforestation on the following:

Question 4.
What will happen if:

But, if trees are cut blindly and no trees are planted then the earth may face global warming, no rainfall, climatic change, soil erosion, and desertification, etc. So, cutting trees for any reason at all is not justified.

Question 8.
Explain how deforestation leads to reduced rainfall.
Answer.
Deforestation leads to the accumulation of CO2 in the atmosphere which results in global warming as CO2 traps the heat of the sunrays. The increase in temperature on earth will disturb the water cycle and reduce rainfall, causing drought in the region.

Question 9.
Find out about national parks in your state. Identify and show their location on the outline map of India.
Answer.
Do yourself.

Question 10.
Why should the paper be saved? Prepare a list of ways by which you can save paper.
Answer.
Manufacturing paper needs trees. By cutting trees, deforestation is caused which disturbs the balance in nature. If the paper is saved or recycled, many trees can be saved. Paper can be saved by recycling. Paper can be recycled.5-7 times and can be used. If everyone who uses paper, could save at least one sheet of paper in a day, we can save many trees in a year.

We should save and reuse the used paper and recycle it. By following these steps we can save not only the trees but also the energy and water needed for manufacturing paper.

Question 11.
Complete the word puzzle:
Down
1. Species on the verge of extinction.
2. A book carrying information about endangered species.
5. Consequence of deforestation.
Across
1. Species which have vanished.
3. Species found only in a particular habitat.
4. Variety of plants, animals, and microorganisms found in an area.
Answer. 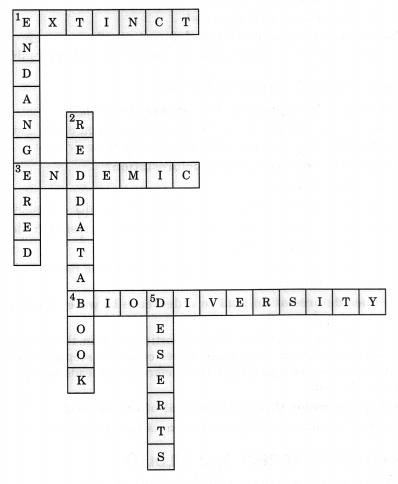