Read the following extracts and answer the questions that follow choosing the correct options among the given ones :

I. The only thing that makes you stronger is seeing somebody like you, achieving something huge. Then you know how much is possible and you reach out further than you ever thought you could. (Page 101)

Multiple Choice Questions
1. The speaker in these lines is talking of
(a) himself
(b) Stephen Hawking
(c) Hawking’s assistant
(d) disabled people.

2. One feels inspired and confident when one finds someone in the same or worse circumstances
(a) needing his help
(b) living a decent life
(c) doing something great
(d) earning much money.

II. Every time I shifted in my chair or turned my wrist to watch the time—I wanted to make every one of our thirty minutes count—I felt a huge relief and exhilaration in the possibilities of my body. How little it mattered then that I would never walk, or even stand. (Page 102)

Questions
1. Why was the author looking at his watch so often ?
2. Why did he feel relief and exhilaration ?
3. Explain the meaning of the last sentence.

Answers
1. The author had been granted only thirty minutes to talk to Hawking. He wanted to make full use of each minute.

2. The author was a disabled person. However, there was before him a totally invalid person— Hawking. Yet this invalid had reached great heights. So the author was pleased to see that his limbs were much better than that of Hawking. He thought if Hawking could do so much with his body, he (the author) could do much more.

3. The thought that he could not walk or stand did not cause any sorrow now. After all people with weaker bodies have done much useful work in life. He had realised it after meeting Hawking.

III. “I know what you mean.” I remembered the years I’d spent trying to play a Spanish guitar considerably larger than I was ; and how gleefully I had unstringed it one night. (Page 103)

Multiple Choice Questions
1. The speaker of the above lines is
(a) Firdaus Kanga
(b) Hawking
(c) Hawking’s assistant
(d) Newton.

3. What did the speaker gleefully do ?
(a) he played on the guitar
(b) he threw the guitar away
(c) he broke the strings of the guitar
(d) he became quiet.

COMPREHENSION CHECK (Page 104)
Which is the right sentence ?

3. Every time he spoke to the scientist, the writer felt guilty because
(i) he wasn’t sure what he wanted to ask.
(ii) he forced the scientist to use his voice synthesiser.
(iii) he was face to face with a legend.

4. “I felt a huge relief…in the possibilities of my body.” In the given context, the highlighted words refer to
(i) shifting in the wheelchair, turning the wrist.
(ii) standing up, walking.
(iii) speaking, writing.

WORKING WITH THE TEXT (Page 104)
Answer the following questions :

Question. 1.
(i) Did the prospect of meeting Stephen Hawking make the writer nervous ? If so, why ?
(ii) Did he at the same time feel very excited ? If so, why ?

Question. 2.
Guess the first question put to the scientist by the writer.

Answer:
The first question was how he felt when someone asked him to be brave.

Question. 3.
Stephen Hawking said, “I’ve had no choice.” Does the writer think there was a choice ? What was it ?

Answer:
Yes, the writer thinks there was a choice. It was to live creatively with the reality of one’s disintegrating body. This was Hawking’s choice. He had refused to lead a dull life of an inactive disabled person.

Question. 4.
“I could feel his anguish.” What could be the anguish ?

Answer:
The anguish was that his pale fingers and eyes were frustrated in exhaustion. He could not express himself freely though ideas were floating in his mind.

Question. 5.
What endeared the scientist to the writer so that he said he was looking at one of the most beautiful men in the world ?

Answer:
The scientist’s one-way smile endeared him to the writer. So he said he was looking at one of the most beautiful men in the world.

Answer:
“Before you, like a lantern whose walls are worn so thin you glimpse only the light inside is the incandescence of a man.”

Question. 7.
(i) If ‘the lantern’ is the man, what would its ‘walls’ be ?
(ii) What is housed within the thin walls ?
(iii) What general conclusion does the writer draw from this comparison ?

Answer:
(i) If ‘the lantern’ is the man, its ‘walls’ would be the skeleton-like physical structure.
(ii) The light/glow of the eternal soul is housed within the thin walls.
(iii) From this comparison, the writer draws the general conclusion that ‘It is not the body but the eternal soul that matters’.

Question. 8.
What is the scientist’s message for the disabled ?

Answer:
The disabled should concentrate on what they are good at. It is foolish to waste time in imitating the normal people.

Question. 9.
Why does the writer refer to the guitar incident ? Which idea does it support ?

Answer:
The writer spent many years trying to play a Spanish guitar considerably larger than he was. One night, he unstringed it very joyfully.

It supports the idea that things like the disabled Olympics are a waste of time. One should practise only what one is good at.

Question. 10.
The writer expresses his great gratitude to Stephen Hawking. What is the gratitude for ?

Answer:
Stephen Hawking spared time for the writer. After meeting him the author felt much inspired. He felt that he had met the greatest and best disabled person on earth. Therefore, the writer expresses his great gratitude to Stephen Hawking.

Question. 11.
Complete the following sentences taking their appropriate parts from both the boxes below.
(i) There was his assistant on the line …
(ii) You get fed up with people asking you to be brave, …
(iii) There he was, …
(iv) You look at his eyes which can speak, …
(v) It doesn’t do much good to know …
A
• tapping at a little switch in his hand
• and I told him
• that there are people
• as if you have a courage account
• and they are saying something huge and urgent
B
• trying to find the words on his computer.
• I had come in a wheelchair from India.
• on which you are too lazy to draw a cheque.
• smiling with admiration to see you breathing still.
• it is hard to tell what.

Answer:
(i) and I told him I had come in a wheelchair from India.
(ii) as if you have a courage account, on which you are too lazy to draw a cheque.
(iii) tapping at a little switch in his hand, trying to find the words on his com-puter.
(iv) and they are saying something huge and urgent—it is hard to tell what.
(v) that there are people smiling with admiration to see you breathing still.

WORKING WITH LANGUAGE (Page 106)
Question 1.
Fill in the blanks in the sentences below using the appropriate forms of the words given in the following box.

(i) I met a___from an antique land.
(ii) I need special___in mathematics. I can’t count the number of times I have failed in the subject.
(iii) The guide called Stephen Hawking a worthy___to Issac Newton.
(iv) His other problems___into insignificance beside this unforeseen mishap.
(v) The meeting was___by the youngest member of the board.
(vi) Some people say ‘yours ___’ when they informally refer to themselves.
(vii) I wish it had been a____match. We would have been spared the noise of celebrations, at least.

Question 2.
Look at the following words.

Can you create a meaningful phrase using both these words ?
(It is simple. Add -ing to the verb and use it before the noun. Put an article at the beginning.)
..a walking stick

Now make six such phrases using the words given in the box.

Answers
(i) He has two brothers. Both are lawyers.
(ii) More than ten persons called. All of them wanted to see you.
(iii) They all cheered the team.
(iv) Both her parents are teachers.
(v) How much have you got ? Give me all of it.

Explanation
Both ‘means’ two out of two’.
‘All’ means ‘every-one (everything) out of more than ‘two’.

Question 4.
Complete each sentence using the right form of the adjective given in brackets.
(i) My friend has one of the___cars on the road. (fast)
(ii) This is the___story I have ever read. (interesting)
(iii) What you are doing now is___than what you did yesterday. (easy)
(iv) Ramesh and his wife are both___. (short)
(v) He arrived___as usual. Even the chief guest came___than he did. (late, early)

Answers
(i) My friend has one of the fastest cars on the road.
(ii) This is the most interesting story I have ever read.
(iii) What you are doing now is easier than what you did yesterday.
(iv) Ramesh and his wife are both short.
(v) He arrived late as usual. Even the chief guest came earlier than he did.

Question 1.
Say the following words with correct stress. Pronounce the parts given in color loudly and clearly. 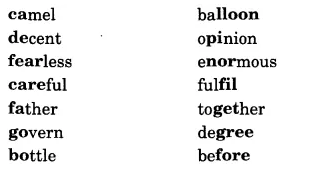 Question 2.
Underline stressed syllables in the following words. Consult the dictionary or ask the teacher if necessary.

Question 3.
Writing a notice for the School Notice Board.

Step 1
Discuss why notices are put up on the notice board.
What kinds of ‘notices’ have you lately seen on the board ?
How is a notice different from a letter or a descriptive paragraph ?

Step 3
Write a few lines describing the object you have lost or found. Mention the purpose of the notice in clear terms. Also write your name, class, section and date.

Step 4
Let one member of each group read aloud the notice to the entire class.
Compare your notice with the other notices, and make changes, if necessary, with the help of the teacher.

Imagine that you are a journalist.
You have been asked to interview the president of the village panchayat.
Write eight to ten questions you wish to ask.
The questions should elicit comments as well as plans regarding water and electricity, cleanliness and school education in the village.

25 May 2014
I have lost my book titled Golden English Guide. I lost it somewhere in the school premises. The founder is requested kindly to give it back to me. I shall be very grateful.
Ram Manohar
Class VIII A

An Interview with the President of the Village Panchayat.