(iii) Erosion is the wearing away of the landscape by different agents like water, wind, and ice.

(iv) When rivers outflow their banks, they cause floods in the neighbouring areas. The floodwater takes away fine soil and other material and deposits them along the banks. This deposition leads to the formation of flood plains.

(v) Winds lift and carry sand from one place to another. When they stop blowing, sand falls and gets deposited in low hill-like structures called sand dunes.

(vi) Beaches are formed when the sea waves deposit sediments along the shores of the sea.

(vii) When a river enters the plain, it forms a large bend which is cut-off from the mainstream in due course of time. The cut-off stream takes the form of a lake called oxbow lake.

Question 2.
Tick the correct answer.
(i) Which is not an erosional feature of sea waves?
(a) Cliff
(b) Beach
(c) Sea cave
Answer.
(b) Beach.

(ii) The depositional feature of a glacier is:
(a) Flood plain
(b) Beach
(c) Moraine
Answer.
(c) Moraine.

(iii) Which is caused by the sudden movements of the earth?
(a) Volcano
(b) Folding
(c) Flood plain
Answer.
(a) Volcano.

(iv) Mushroom rocks are found in:
(a) Deserts
(b) River valleys
(c) Glaciers
Answer.
(a) Deserts.

Question 4.
Give reasons.
(i) Some rocks have a shape of a mushroom.
(ii) Flood plains are very fertile.
(iii) Sea caves are turned into stacks.
(iv) Buildings collapse due to earthquakes.
Answer.
(i) Because winds erode the lower section of the rock more than the upper part. Therefore, such rocks have a narrower base and wider top.

(ii) Flood plains are formed by the deposition of fine soil and other material called sediments on the river banks. As the soil and sediments are brought by floodwater, they are very fertile.

(iii) After the formation of sea caves when cavities become bigger only the roof of the cave remain, sea arches are formed. Further, erosion breaks the roof and only walls are left. These wall-like features are called stacks.

(iv) In an earthquake, the vibrations travel outwards from the epicenter as waves. The surface starts vibrating which leads to the shaking of structures built on the earth’s surface and thus buildings collapse.

Question 5.
Activity.
Observe the photographs given below. These are various features made by a river. Identify them and also tell whether they are erosional or depositional or landforms formed by both. 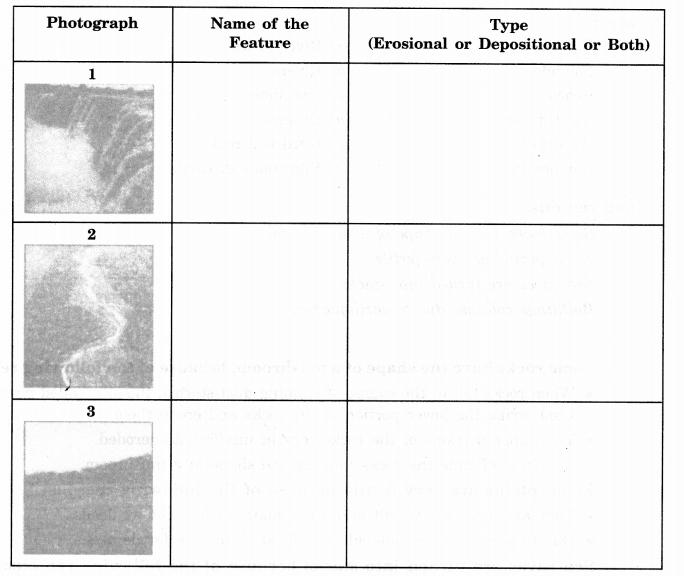 Question 6.
For fun.
Solve the crossword puzzle with the help of given clues.
Across
2. Loop like the bend of a river.
4. Solid form of water.
7. Moving mass of ice.
9. Sudden descent of water in the bed of a river.
11. Natural cavity on weak rocks formed by the action of waves. 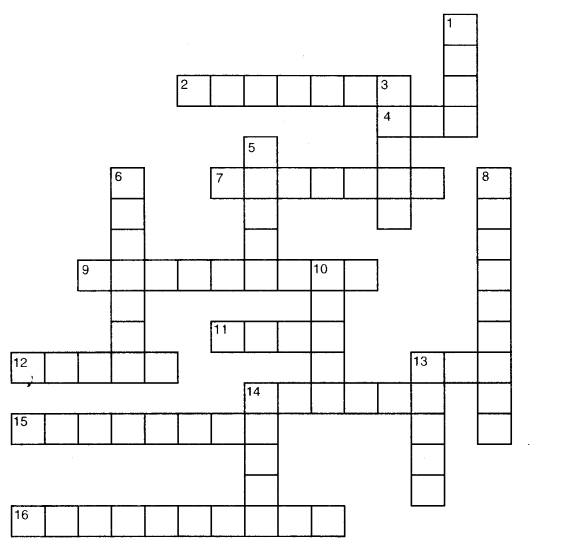 12. Embankment on a river that keeps it in its channel.
13. Large body of seawater.
14. Dry area where sand dunes are found.
15. Small hill of sand caused by the action of the wind.
16. Flat plain formed by river deposits during the time of the flood.
Down
1. Rise and fall of water caused by friction of the wind on the water surface.
3. Flow of water in a channel.
5. Steep perpendicular face of rock along a sea coast.
6. Debris of boulder and coarse material carried by a glacier.
8. Crescent-shaped lake formed by a meandering river.
10. Fine sand deposited by the action of the wind.
13. Isolated mass of rising steep rock near a coastline.
14. Alluvial tracts of land formed by the river deposits at the mouth of a river.
Answer. 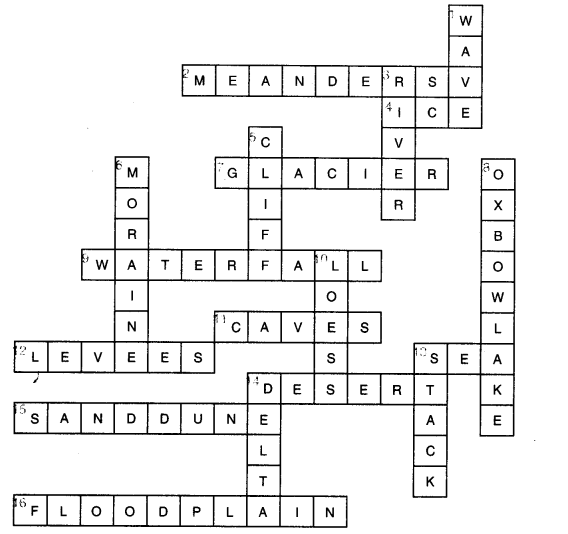 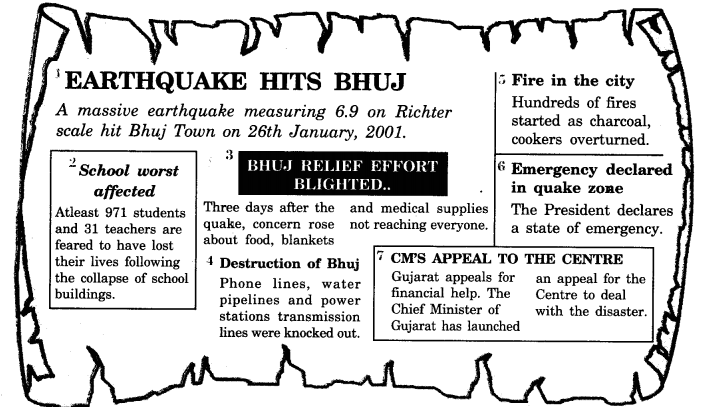 1. Read the ‘Earthquake – A case study’ given in the form of headlines that appeared in the newspapers after the quake. Arrange the events in the right sequence of their happening.
2. Imagine if a quake suddenly shook in the middle of the school day, where do you go for safety?
Answer.

2. We would go for safety

Question 1.
Find out the names of a few rivers of the world that form a delta?
Answer.
Name of some rivers (See the Map):