Question 2.
Can you give this diagram a title? What do you understand about the link between media and big business from this diagram? 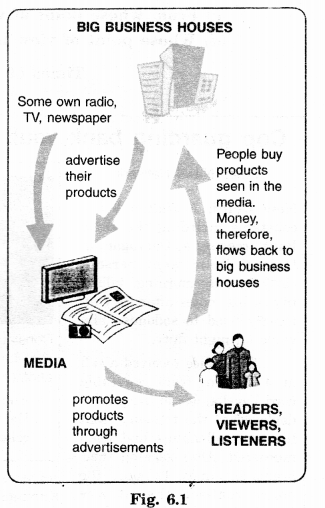 Question 3.
You have read about the ways in which the media ‘sets the agenda’. What kind of effect does this have in a democracy? Provide two examples to support your point of view.
Answer.
Media, the fourth pillar of democracy, sets the agenda to focus on the issue of public interest. This agenda sometimes has positive effects on a. democracy. For example,
(1) Media published reports about alarming levels of pesticides in Cola drinks. The media declared this fact despite the government’s resistance that Cola drinks were unsafe. Thus, the media’s agenda helped us by focusing on an issue that affects our lives.

(2) The media sometimes fails to set agenda to raise issues significant in democracy. For example, it publishes a wide coverage about the ‘World Cup’ but at the same time it does not give attention towards the issue like drinking water as a major problem, the people are facing.

Question 4.
As a class project, decide to focus on a particular news topic and cut out stories from different newspapers on this. Also, watch the coverage of this topic on TV news. Compare two newspapers and write down the similarity and differences in their reports. It might help to ask the following questions:
(a) What information is this article providing?
(b) What information is it leaving out?
(c) From whose point of view is the article being written?
(d) Whose point of view is being left out and why?
Times of India, March 11, 2007 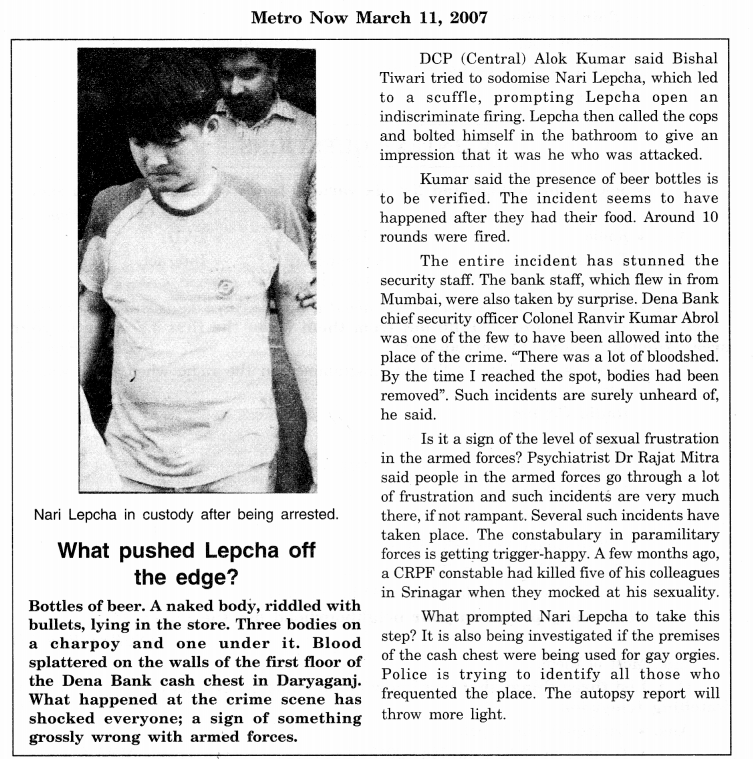 Question 1.
Look at the college and list six various kinds of media that you see. (NCERT Page 71)
Answer.

Question 2.
Ask older members of your family about what they used to listen to on the radio when there was no TV around. Find out from them when the first TV came to your area. When was cable TV introduced? (NCERT Page 71)
Answer.

Question 3.
How many people in your neighbourhood use the internet? (NCERT Page 71)
Answer.
Most of them.

Question 4.
List three things that you know about some other part of the world from watching television. (NCERT Page 71)
Answer.

Question 6.
Take a newspaper and count the number of advertisements in it. Some people say that newspapers have too many advertisements. Do you think this is true and why? (NCERT Page 72)
Answer.

Question 7.
Are the above stories in the two newspapers similar? And if not, why not? What, in your view, are the similarities and differences? (NCERT Page 74)
Answer.
No, they are not similar. A news report in the News of India report, the story is about the crackdown on polluting factories while in the Indian Daily Report, the story is about the closure of factories which led to unrest.
Differences

Question 8.
If you read the story in the News of India, what would you think about the issue? ‘ (NCERT Page 74)
Answer.
The issue is the pollution caused by polluting factories.

Question 9.
Do you think it is important to know both sides of the story? Why? (NCERT Page 75)
Answer.
Yes, because only then we can form a balanced opinion about an issue.

Question 10.
Pretend that you are a journalist for a newspaper and write a balanced story from the two news reports. (NCERT Page 75)
Answer.
Balanced Story

Question 12.
What is the consequence of the media ‘setting the agenda’ by reporting on the Fashion Week rather than the slum demolitions? (NCERT Page 77)
Answer.
They earn huge amounts of money from the fashion week.

Question 13.
Can you think of an issue that does not seem important to you because it is never featured in the media? (NCERT Page 77)
Answer.