Question 1.
Draw in your notebook the symbols to represent the following components of electrical circuits: connecting wires, switch in the ‘OFF’ position, bulb, cell, switch in the ‘ON’ position and battery.
Answer: 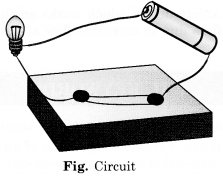 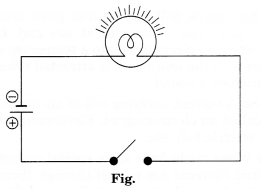 Question 3.
Figure shows four cells fixed on a board. Draw lines to indicate how you will connect their terminals with wires to make a battery of four cells. Question 4.
The bulb in the circuit shown in Fig. does not glow. Can you identify the problem? Make necessary changes in the circuit to make the bulb glow. 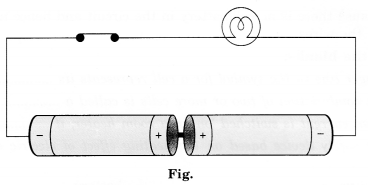 Question 6.
When the current is switched on through a wire, a compass needle kept nearby gets deflected from its north-south position. Explain.
Answer:
When an electric current passes through a wire, it behaves like a magnet. This is the magnetic effect of the electric current due to the attraction of the wire. So, the compass needle which is a magnet gets deflected.

Question 7.
Will the compass needle show deflection when the switch in the circuit shown by Fig. is closed? 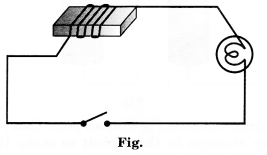 Answer:
No. Since, there is no cell so, no current will flow.

Question 8.
Fill in the blanks:

Question 11.
An electrician is carrying out some repairs in your house. He wants to replace a fuse with a piece of wire. Would you agree? Give reasons for your response.
Answer:
No, we would not agree to replace the fuse with a wire. The electric wire will not melt even if a high current flows through it. So, it will not prevent the damage done by high current.

Question 12.
Zubeda made an electric circuit using a cell holder shown in the following Fig., a switch, and a bulb. When she put the switch in the ‘ON’ position, the bulb did not glow. Help Zubeda in identifying the possible defects in the circuit.

Answer:
One of the reasons may be that the rubber band used in the cell holder may not be tight enough to keep the two cells in contact with each other. If the cells are not in proper contact with each other, then the circuit will not be complete, and the current will not flow through the circuit. Hence, the bulb will not glow. The other reason may be that the two cells are not connected properly. The negative terminal of one cell must be connected to the positive terminal of the other cell.

Question 13.
In the circuit shown in the following Fig.: 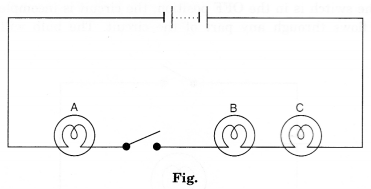