In this chapter 7 Control and Coordination, students will learn about the nervous system of animals, reflex actions, the human brain, how tissues are protected and how nervous tissues cause action, coordination in plants, hormones in animals.

Question 1.
What is the difference between reflex action and walking ?
Answer:

Question 2.
What happens at the synapse between two neurons ?
Answer: At synapse, axon terminal is expanded to form presynaptic knob. The dendrite terminal that lies close to it is slightly broadened and depreseed to form post-synaptic depression. A fluid filled narrow space, called synaptic cleft, occurs between the two. When an impulse reaches the presynaptic knob, it stimulates the release of neurotransmitter into synaptic cleft. Neurotransmitter comes in contact with chemoreceptor sites of the membrane of postsynaptic depression. This generates an electrochemical signal or impulse in the dendrite part of second neuron.

Question 3.
Which part of brain maintains posture and equilibrium of the body ?
Answer:
Cerebellum.

Question 4.
How do we detect the smell of an agarbatti (incense stick) ?
Answer:
Burning of an agarbatti emits smoke having very large number of odorant molecules. They enter the nose along with inhaled air. The odorant molecules are trapped in mucus present over olfactory epithelium. Olfactory receptor cells have a number of non-motile olfactory hair containing special protein molecules. Contact between the two forms cyclic AMP that generates an impulse in the receptor cells. Nerve fibres coming out of the cells carry the information to olfactory bulbs which transmit the same to temporal lobes of cerebrum for interpretation.

Question 5.
What is the role of brain in reflex action ? (CCE 2010, 2015)
Answer:
It functions as a relay centre for transferring impulse from sensory to motor neurons in several reflex actions called cerebral reflexes, e.g, closure of eyes exposed to flash of light, salivation at the sight or smell of food. In spinal reflexes it acts as information collecting and evaluation centre without any direct involvement in reflex action.

Question 6.
What are plantohormones ?
Answer:
Phytohormones are chemical substances other than nutrients produced naturally in plants which regulate growth, development, differentiation and a number of physiological processes, e.g., auxin, gibberellins, abscisic acid, cytokinins.

Question 8.
Give an example of a plant hormone that promotes growth ?
Answer:
Indole 3-acetic acid or IAA (auxin).

Question 10.
Design an experiment to demonstrate hydrotropism. (CBSE 2010, CCE 2011)
Answer:
Apparatus: Trough with perforated base, saw dust, water, seeds of Pea/Gram, wooden support.
Procedure: Take a trough with perforated base. Fill it with saw dust. Moisten the same. Sow several seeds of Pea or Gram. Place the trough in slanting position by means of a wooden block. Keep the saw dust moist by sprinkling water at intervals. Observe after 2-3 days.
Observation: As the radicles come out of the seeds, they are seen to move towards the perforations. They come out of the pores and hang downwardly for some time under the influence of gravity. However, after some growth they bend back and enter the perforations to reach moist saw dust in complete disregard of gravity (Fig. 2.11). 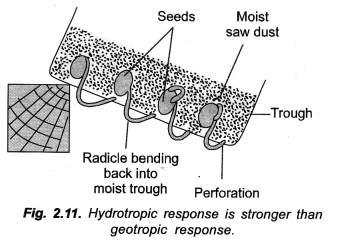 Inference: Bending of radicles back into moist saw dust is hydrotropic movement. It occurs despite being against the force of gravity.

Question 11.
How does chemical coordination take place in animals ?
Answer:
In animals, chemical coordination is achieved through the agency of hormones which function as chemical messengers or informational molecules. Hormones are secreted by ductless glands in response to specific conditions or nervous stimulation. Timing and amount of a hormone released are regulated by feed-back mechanism. After a meal, sugar level of blood rises. It is detected by pancreas. Pancreas responds by producing hormone insulin from (3-cells of islets of Langerhans. Insulin causes glucose to be absorbed by all cells as well as get stored in liver and muscles in the form of glycogen. As the level of glucose falls in blood, insulin secretion is reduced.

Question 12.
Why is the use of iodised salt advisable ? (CCE 2011, 2015)
Answer:
Iodine is essential for synthesis of hormone thyroxine in thyroid gland. Thyroxine controls basal metabolic rate, physical activity, body temperature, heart beat, mental, physical and sexual development besides regulating carbohydrate, protein and fat metabolism. Deficiency of thyroxine disturbs metabolic, physical and mental activities besides causing disorders of simple goitre, cretinism and myxedema. Therefore, it is always advisable ^ to take iodised salt so that there is no deficiency of iodine.

Question 13.
How does our body respond when adrenaline is secreted into blood ?
Answer:
Adrenaline/emergency hormone/triple F hormone

Question 14.
Why are some patients of diabetes treated by giving injections of insulin ?
Answer:
Diabetes mellitus is of two types, insulin dependent and insulin independent. In insulin dependent diabetes, pancreas is unable to produce required quantity of insulin. As a result blood sugar continues to rise and part of sugar is excreted through urine resulting in diabetes. This is kept under check by regular injection of insulin. Availability of insulin will help the cells to take up glucose while liver and muscles are induced to store excess of glucose as glycogen.

Question 1.
Which of the following is a plant hormone ?
(A) Insulin
(B) Thyroxine
(C) Oestrogen
(D) Cytokinin.
Answer:
(D).

Question 3.
The brain is responsible for
(A) Thinking
(B) Regulating the heart beat
(C) Balancing
(D) All the above.
Answer:
(D).

Question 4.
What is the function of receptors in our body ? Think of situation where receptors do not work properly. What problems are likely to arise ? (CCE 2011)
Answer:
Receptors are specialised cells, tissues, organs and nerve endings which are able to pick up specific stimuli, e.g., photoreceptors, gustatoreceptors, thermoreceptors, photoreceptors, statoreceptors, tangoreceptors, pain and pressure receptors. Receptors provide sensory input about external and internal environment. Without them, an animal will not able to observe, handle and taste food. It will not be aware of an approaching enemy. The animal may not be able to correct its position and fall down repeatedly if its statoreceptors are damaged. Therefore, the animal will not be able to perform the activities connected with the defective receptors.

Mechanism of Impulse Transmission:
Impulse is a self propagated electrical current that travels from one end to another of a neuron for the passage of a message.

A stimulus received by a neuron travels through it in the form of an electrical disturbance. During rest the outer surface of a neuron is positively charged while the interior has negative charge. Stimulus causes opening of ion channels which makes the outer surface negatively charged while the interior becomes positively charged. This creates the impulse which moves forward. The posterior region returns to the condition of rest. At the end of the neuron, the impulse is passed on to the next neuron, an organ, muscle or gland in the form of a neurotransmitter. Neurotransmitter is a chemical secreted by axon terminal for transmission of impulse to the next neuron, muscle, gland or organ, e.g., acetylcholine, noradraneline, glutamic acid.

Question 6.
How does phototropism occur in plants ?
Answer:
It is directional growth movement of curvature which occurs in response to unidirectional exposure to light. The region of photoperception is sho.ot apex while the region of response is in the area of elongation. The light effective in phototropic response is blue light. The photoreceptor is a flavoprotein called phototropin. Leaves are essential for producing the response.
Stems generally bend towards the direction of light. They are positively phototropic. Leaves generally come to lie at right angles to light. They are diaphototropic. Roots are either neutral (non-phototropic) or negatively phototropic. Positively phototropic heads of Sunflower perform solar tracking as they move from east to west along the direction of sun.
Phototropic movement is generally caused by increased auxin on the dark side and lesser auxin on the illuminated side. It causes more growth on the dark side of stem causing it to bend towards the source of light. The opposite happens in root where less auxin stimulates growth while higher auxin inhibits growth.
In the plant growing in the open, sunlight is received from above. Auxin diffuses equally on all sides so that the stem does not bend but grows straight vertically.

Question 7.
Which signals will get disrupted in case of spinal cord injury ?
Answer:

Question 8.
How does chemical coordination occur in plants ?
Answer:
Plants produce a number of hormones which control and coordinate their functioning. Amount of hormone depends upon the environment and other stimuli. Its effect is also regulated by its antagonistic * hormone, e.g., auxin and abscisic acid. The effect is enhanced by synergic presence of another hormone, e.g., auxin and gibberellin.

Question 9.
What is the need for a system of control and coordination in an organism ?
Answer:
The body of a multicellular organism consists of a number of components and sub-components, each specialised to perform a particular fonction. However, all the components are not required to fonction all the time at the same speed. A system of controls is required to allow them to perform or not to perform, slow down or speed up their working. Further, most activities require the simultaneous or sequential functioning of a number of parts, stopping some and stimulating others. During feeding, eyes locate the food, nose registers its smell, hands pick up the food and take it to mouth, mouth opens to receive the food, teeth and muscles take part in its mastication and saliva moistens it. Tongue perceives its taste. It moves the food below the teeth. Later it pushes the crushed food into pharynx. All this is possible only through a system of coordination.

Question 11.
Compare and contrast nervous and hormonal mechanisms for control and coordination in animals.
Answer:
Nervous system controls and coordinates many body functions as it has a well spread network of neurons. Messages travel very fast, in the form of electrical impulses. However, it has limitations,

A small gap is required between two impulses. These short-comings are overcome in endocrine system. Here, the stimulated glandular cells secrete chemicals that diffuse throughout the body. Cells have receptors for picking up chemical information. The information can pass persistendy. The passage of information is, of course, slower. It, however, influences all the cells of the target. A multiple effect can also be produced. Adrenaline reduces blood supply to skin and digestive system but increases the same to skeletal or voluntary muscles. There is increase in breathing rate and heart beat. The body becomes ready to deal with an emergency. Further, endocrine system controls and coordinates many processes of the body where nervous system has no role, e.g., cell permeability, cell division, cell growth, cell differentiation, development of sex organs, secondary sex characters and several other activities. Any discrepancy can lead to a disorder, e.g, dwarfism and gigantism, hypothyroidism (simple goitre, cretinism, myxedema), hyperthyroidism (exophthalmia).

Question 12.
What is the difference between the manner in which movement in Sensitive Plant and movement in our legs takes places ?
Answer: 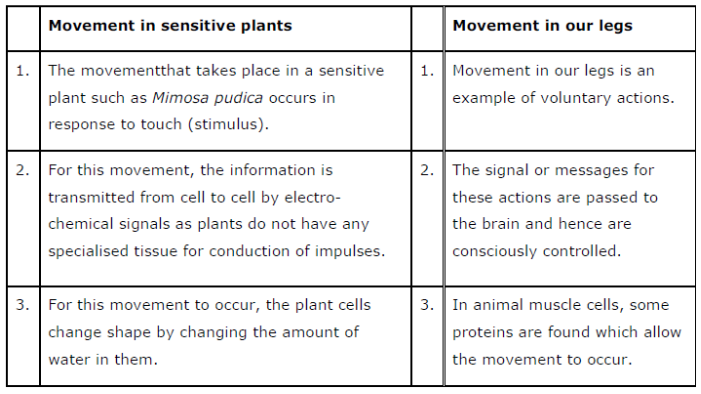 Question 1.
Fore brain is centre of intelligence, control of movements, hearing, smell and sight.
Question 2.
Chewing cud is a movement of growth.
Question 3.
Immediate response to stimulus is shown by Mimosa pudica.
Question 4.
Rise in sugar level in blood stops secretion of insulin by pancreas.
Question 5.
Control and coordination are functions of nervous and endocrine systems.
Question 6.
Stems are positively geotropic while roots are negatively geotropic.
Question 7.
Major part of taste is smell.
Question 8.
I withdrew my hand back from hot plate reflexly.

Question 9.
Match the articles in columns I and II (single matching) :

Question 10.
Match the contents of columns I, II and III (double matching) :

Fill In the Blanks

Download the free PDF of Chapter 7 Control and Coordination or save the solution images and take the print out to keep it handy for your exam preparation.

Hope given NCERT Solutions for Class 10 Science Chapter 7 are helpful to complete your science homework.