A CREATIVE PRESENTATION ON ‘MUMBAI BLASTS’ 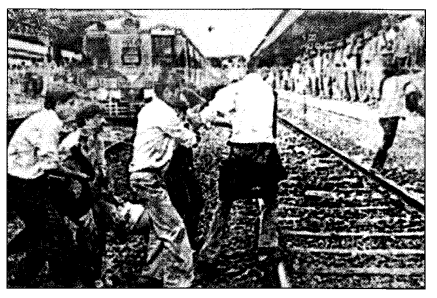 Seven blasts rocked suburban trains in Mumbai on July 11, 2006 Tuesday evening (1ST 18 : 24 to 18 : 35). The Police control room reported that 181 passengers were killed and more than 800 injured. The blasts took place in a span of 30 minutes in first class compartments of suburban trains.

As the blasts ripped apart train compartments, mangled bodies of passengers were hurled out and survivors who were bleeding profusely jostled to come out leading to chaotic scenes. The blasts occurred between 6 pm and 6:30 pm at Matunga, Mahim, Bandra Khar. Borivili, Jogeshwari and Mira Road railway stations.

• Rescue :
Outside the station, the roads had been cordoned off. Two fire engines were posted. Two local trains were halted on either side of the bombed train. Soon after the Matunga/ Mahim blast, 20 seriously injured people were admitted in K.E.M. Hospital. A few more injured were taken to the govt hospital at Sion in central Mumbai, Bhaba Hospital and V.N. Desai Hospital from the blast sites in Mumbai suburbs. Non-government organisations were also there to help the people.

• Relief :
Drivers of private cars and taxis voluntarily transported stranded commuters to their destinations. NGOs were out on the streets and were distributing biscuits to the hungry commuters. Those who had a narrow escape turned Samaritan with members of public by helping the injured. The best part was that people came together and carried the injured to hospitals in auto-rickshaws. People living near the tracks were quite helpful. They came running with bed sheets to carry the injured to the hospital in the absence of stretchers.

• Rehabilitation :
Eight-year-old Rakesh Amrit Parihar, a resident of Vashi in Navi Mumbai was admitted to Bhagwati Hospital in suburban Borivali in an unconscious state. It was due to the efforts of media that Parihar was reunited with his parents.

• Interviews with victims and volunteers :
A victim named Chandrakant Dalvi was travelling in the Western Railway local which left Churchgate at 1754 hrs as it was leaving the Mahim station on track 3 at around 6.20 pm. He said he could not hear anything in his left ear.

Nyal Chand who was also on the train said that all he saw was a bright orange spark and a loud bang. He saw a young man fall off the train due to the impact of the blast. People started jumping off the moving train. According to him there were at least 15 casualties on that compartment.

• Interview with volunteers :
Police constable Santosh Kandvilkar, 28, was in the Churchgate-Virar fast local. He was attached to the Worli Police Station and was taking the train back home like everyday. He told that he was standing next to the exit of the first class compartment and the train was getting into the station. He heard an explosive noise. He helped many people who were bleeding though he himself was injured. He had lost his hearing. Now he is taking on life’s challenge head on and ploughing ahead.

• United we serve :
Gruesome is too small a word to describe the bomb blasts. And for the senseless perpetrators, there can be no victory in killing innocent people. We, Indians, are so lucky only for one fact that our fellow Indians are always there to help us when we need them, more so in Mumbai. People stand together and join hand in hand to show the anti-national, anti-human elements that ‘we are not afraid’. Deep in their heart, they do believe that no one can divide them, frighten them or kill their spirits. These may be natural disasters, wars or terrorist attacks. They may create hype and confusion in the minds of people for a few moments. But they cannot kill the spirit of Indians. They can not uproot the sense of brotherhood and unity.

Question 5.
Now write your own film review on ‘Chak de India’, ‘Lagaan’, or ‘Mother India’. The teacher could arrange for the screening of the film if need be.

The class could also decide on any other regional film that portrays the spirit of National Integration.

Highlight the aspect of national integration that has been portrayed in the film. Brief Outline of the Plot

Kabir Khan is the former captain of the India Hockey Team. After a disastrous loss to the Pakistani hockey team, Khan is ostracized from the sport. He and his mother are further forced out from their ancestral home by angry neighbours. Seven years later in an attempt to redeem himself, Khan becomes the coach for the Indian women’s hockey team, with the goal of turning its sixteen contentious players into a champion team. After leading the women to the Gold, Khan restores his reputation and returns with his mother to their home, welcomed by those who had shunned them years before. ‘Ohak De ! India’ explores religious bigotry, the legacy of partition, ethnic/regional prejudice and sexism in contemporary India through field hockey.

What I liked about the film

It is a rare film where the hero watches from the stand and lets a bunch of girls do all the winning. It is all about women’s liberation and their power. It is one of the best feminist films. It is a patriotic heartwarmer. Its title song is stirring and meaningful and enhances patriotic fervour.

What I disliked about the film

The main focus is on the game. Romance is absent, parents are sidelined and no one breaks out into song and dance. The tale of the sporting under-dog is hardly new.

Why the film was worth watching

‘Chak De ! India’ is an outright winner, a triumph of the spirit and of craftsmanship. The Director Shimit Amin has crafted this film with immense staying power, exceptional integrity and gusto. It has great performances by a bunch of unknowns, a gritty peace and a marvellous restrain make it an unbridled ode to patriotism without any hysterical chest-beating. The casting is first rate. Its screenplay offers a rare look at a popular Indian sport often overshadowed by cricket. It will give you a sharp-eyed view of Indian society.

If the team members overcome the divisions and learn to cooperate with and help each other, they would definitely be a winning team be it cricket, hockey or football. Unity among the team members and their confidence can lead them to victory. It also promotes the merits of women players.

Students may write reviews of other films on their own basing these on these outlines.

Question 6.
Working in groups of four, discuss the ways in which the following have integrated India :

The track ‘Jai Ho’ symbolises a young resurgent, a young confident India on a global platform. ‘Jai Ho’ spirit has made India proud. It is associated with the aspirations and emotions related to modern Indian aesthetics. It has grown with the people. It is a mega hit at world wide too. This is an Oscar Award winning song from ‘Slumdog Millionaire’ movie. This song shows the winning spirit of Indians who inspite of difficulties and problems believe in the dictum ‘I’ll win’, ‘I’ll be triumphant’. Inspite of terrorists’ attacks, earthquakes, tsunami, famines, floods and riots, Indians are winning at the global platform.

Song ‘Vande Mataram’ reminds us of the times when Indians were slaves of the British. These two words instilled patriotism in the minds and hearts of people. It ignited the flame which perished the foreign rule. This song recalls the time when every Indian was fighting for independence.

North Indian food consists of spicy vegetables, Chapati, Dal or Pulse, Makki ki Roti- Sarson ka Saag, Curd, Lassi, Butter, Papad and Salad of Onion, Cucumber and Radish. It is rich in proteins and vitamins. It is delicious too. Halwa and Kheer are an integral part of dessert. Poori-Chole, Bhatoore-Chole, Stuffed potato Paranthas are favourite breakfast.

Now these foods are liked by everyone. North Indian foods as well as south Indian foods are served in hotels across the country. They are included in the menu of marriage parties and other celebrations. They serve as a strong bond between two parts of our country. It has flourished the food industry. It has, in fact, integrated India.

People wear different types of clothes in different parts of India. With the advent of satellite channels, it has become convenient to know different people having different customs and wearing their special attires. Due to trade and job they migrate to different parts of the country and come into contact with their customs. They get influenced by their regional dresses and adopt them. Sari is considered to be a special dress of South India. But it is quite popular among the women of North India too. In the same way, Lehengas are getting popularity in every part of India. Achkan and Dhoti-Kurta are considered to be graceful dresses of the men in every part. Thus, we can say that fashion and dresses play an important role as a binding force and have integrated our country. Fashions don’t divide the people but foster togetherness and unity.

With the spread of telecommunication and information technology, it has become difficult to stay at one place. Agriculture is the main occupation in the North India. So, people migrate from south to north Indian states in search of work. In the same way, Mumbai is called the economic or commercial capital. People from all over India go to this film city in search of different types of jobs in film Industry. In the same way, there are ample job opportunities in Bangalore, Chennai, Surat, Pune, Ludhiana, Amritsar, Kota, Manipal etc, in different fields. This has led to migration of skilled and unskilled man-power to various cities and states. So, the people are adopting different cultures, customs and learning different languages. It is promoting national integration.

The migration of people from one state to another in search of trade-job opportunities has made India a unified and integrated territory. People settle at a place and live a comfortable life. They tie nupital knots and develop families. This brings them emotionally together. The strong bonds of relationships act as bridges which join different people of different states in one stream, ie, Indianness or Bhartiyata. Fast means of transport such as aeroplanes have limited the distances and integrated India.