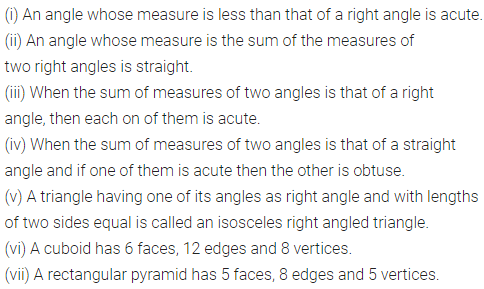 Question 3.
State whether the following statement is true or false. Justify your answer.
‘An angle whose measure is greater than that of a right angle is obtuse’.
Solution:

Multiple Choice Questions
Choose the correct answer from the given four options (4 to 15):
Question 4.
Comparison of lengths is possible in case of
(a) two lines
(b) two line segments
(c) two rays
(d) a ray and a line segment
Solution:

Question 7.
An obtuse angled triangle can be
(a) right angled
(b) isosceles
(c) equilateral
(d) none of these
Solution:

Question 8.
If you are facing north and turn through \(\frac{3}{4}\) of a turn in anti-clockwise direction, which direction will you face?
(a) east
(b) south
(c) west
(d) north
Solution:

Question 9.
Open any two adjacent fingers of your hand. What kind of angle you get?
(a) acute
(b) right
(c) obtuse
(d) straight
Solution:

Question 10.
In the given figure, the number of obtuse angles is

Question 14.
Which of the following statement is correct?
(a) Every rhombus is a square
(b) Every parallelogram is a rectangle
(c) Every square is a rhombus
(d) Every rectangle is a square
Solution:

Question 15
A quadrilateral whose each angle is a right angle is a
(a) trapezium
(b) parallelogram
(c) rhombus
(d) rectangle
Solution:

Higher Order Thinking Skills (Hots)
Question 1.
If the lengths of two sides of an isosceles triangle are 3 cm and 7 cm, then what is the lengths of the third side?
Solution:

Question 2.
If the lengths of three consecutive sides of an isosceles trapezium are 5 cm, 6 cm and 8 cm, then what is the length of the fourth side?
Solution: