When sunlight passes through the atmosphere, the fine particles in air scatter the blue colour more strongly than red.

Question 2.
Why do stars appear to twinkle?
Answer:
Stars appears to twinkle due to atmospheric refraction.

Question 1.
What is meant by advance sunrise and delayed sunset? Draw a labelled diagram to explain these phenomena.
Answer:
Advance sunrise and delayed sunset is due to atmospheric refraction.
When the sun is slightly below the horizon, the sunlight coming from the less dense (vacuum) to more dense (air) medium is refracted downwards. So the sun appears to be above the horizon.

Similarly, even after actual sunset, the sun can be seen for a few minutes due to refraction of sunlight. 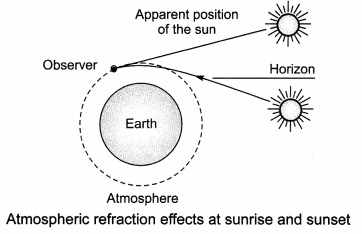 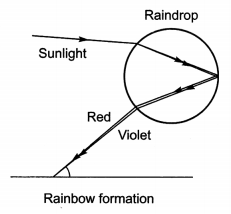 Rainbow formation: A rainbow is a natural spectrum appearing in the sky after rain shower. It is caused by dispersion of sunlight by tiny water droplets, present in the atmosphere. The water droplets act like small prism. They refract and disperse the incident sunlight, then reflect it internally and finally refract it again.
Due to dispersion of light and internal reflection different colours appear. 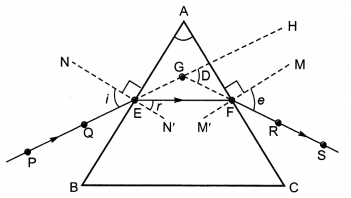 Refraction of light through a triangular glass prism

Question 1.
What is the difference in colours of the sun observed during sunrise/sunset and noon? Give explanation for each.
Answer:
In the morning and evening, the sun lies near the horizon. Sunlight travels through a larger distance in the atmosphere and most of the blue light and shorter wavelengths are scattered away by the particles. Therefore, the light that reaches our eyes is of longer wavelength. This gives rise to the reddish appearance of the sun.
At noon sun appears white as only a little of blue and voilet colours are scattered. 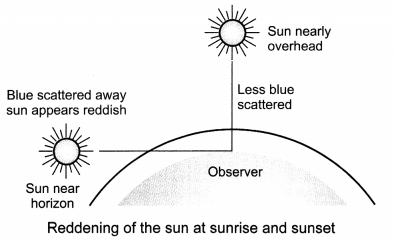 Question 2.
Define the term dispersion of white light. Name the colour of light which bends (i) the most, (ii) the least, while passing through a glass prism. Draw a ray diagram to justify your answer.
Answer:
Dispersion of white light by a glass prism
Dispersion: The splitting of light into its component colours is called dispersion.
The red light bends the least while violet bends the most.
Spectrum: The band of the coloured components of a light beam is called spectrum.
i.e., VIBGYOR 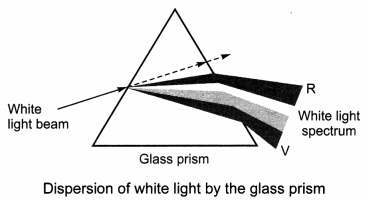 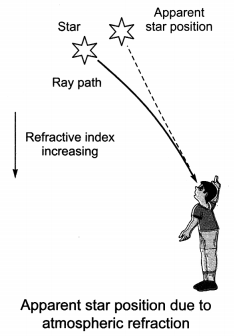 Question 1.
List four common refraction defects of vision. Suggest the way of correcting these defects. (CBSE 2014)
Answer:
Defects of vision:
(i) Cataract: Crystalline lens of people at old age becomes milky and cloudy. This condition is called cataract.
It is possible to restore vision through cataract surgery.

(a), (b) The myopic eye, and (c) correction for myopia with a concave lens

(iv) Presbyopia
The power of accommodation of the eye usually decreases with ageing. In this eye defect it is difficult to see nearby objects comfortably and distinctly without corrective eye glasses.

Cause:
Weakening of ciliary muscles and diminishing flexibility of eye lens.

Question 2.
Explain the structure and functioning of the human eye. How are we able to see nearby as well as distant objects?
Answer: 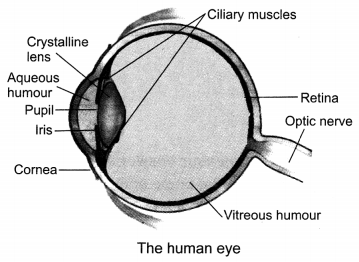 The power of accommodation, that is, the ability of the eye lens to adjust its focal length, help us to see near and far objects clearly.

Question 1.
How will you use two identical prisms so that a narrow beam of white light incident on one prism emerges out of the second prism as white light? Draw the diagram.
Answer:
When an inverted prism is kept a little distance away from the prism causing dispersion or basically in the path of splitted beam, the spectrum recombines to form white light.

Recombination of the spectrum of white light

Question 2.
Is the position of a star as seen by us in its exact position? Justify your answer. (NCERT Exemplar)
Answer:
No, the starlight, on entering the earth’s atmosphere, undergoes refraction continuously before it reaches the earth. The atmospheric refraction occurs in a medium of gradually changing refractive index. Since the atmosphere bends starlight towards the normal, the apparent position of the star is slightly different from its actual position.

Question 5.
A narrow beam PQ of white light is passing through a glass prism ABC as shown in the diagram. (CBSE 2014) 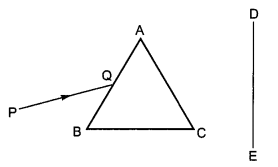 Trace it on your answer sheet and show the path of the emergent beam as observed on the screen DE.
(i) Write the name and cause of the phenomenon observed.
(ii) Where else in nature is this phenomenon observed?
(iii) Based on this observation, state the conclusion which can be drawn about the constituents of white light.
Answer:
(i) Dispersion of light, because different colours of light bends through different angles.
(ii) Rainbow formation
(iii) White light contains seven colours i.e., VIBGYOR 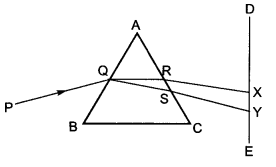 Question 1.
Akshay, sitting in the last row in his class, could not see clearly the words written on the blackboard. When the teacher noticed it, he asked if any student sitting in the front row would volunteer to exchange his seat with Akshay. Salman immediately agreed to exchange his seat with Akshay. Akshay could now see the words written on the blackboard clearly. The teacher thought it fit to send message to Akshay’s parents advising them to get his eyesight checked.
In the context of the above event, answer the following questions:
(a) Which defect of vision is Akshay suffering from? Which type of lens is used to correct this defect?
(b) State the values displayed by the teacher and Salman.
Answer:
(a) Myopia, concave lens
(b) Teacher is very caring and knowledgeable. Salman has great concern for his friend, Akshay, and is very helpful.

Question 2.
On the rainy day, Ram reached his grandfather’s place in village. On the way to the house he saw a beautiful rainbow in the sky. In the night, he saw lots of twinkling stars in the clear sky. He was very excited to see these beautiful natural phenomenon, which he was not able to see in the city, where he lived with his father. Explain the phenomenon on the basis of science. Do you think that pollution in the atmosphere affects the formation of rainbow and twinkling of stars. Do you agree with the fact that pollution free environment will strengthen such natural phenomenon in the cities as well. Elaborate.
Answer:

Question 3.
Vinay’s father cannot read a book placed 25 cm from his eye. But he feels a little comfortable when the book is placed 50 cm away. Vinay adviced his father for checkup of the eyes.
(a) From which defect of vision Vinay’s father may be suffering from? Give the proper correction.
(b) State the values of Vinay.
Answer:
(a) Hypermetropia, correction can be done by using suitable convex lens.
(b) Vinay is caring and intelligent.

Question 4.
Ankit’s grandma is facing a problem of clouded, blurred and dim vision. Ankit took her to the doctor.
(a) From which defect of vision Ankit’s grandma may be suffering from? Give proper correction.
(b) State the values of Ankit.
Answer:
(a) Cataract. It is possible to restore vision through cataract surgery.
(b) Ankit is caring and intelligent.