The herpes virus family contains more than a hundred species of enveloped DNA viruses that affect humans and animals.

The herpes virus capsid is icosahedral, composed of 162 capsomers and enclosing the core containing the linear double stranded DNA genome. The nucleocapsid is surrounded by the lipid envelope derived from the host cell. The envelope carries surface spikes (Figure 10.4). Teguments are present in between the envelope and capsid. The enveloped virion measures about 200nm and the naked virion about 100 nm in diameter. 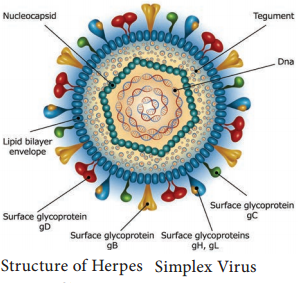 They replicate slowly (more than 24 hours) and have a narrow host range, grow well in fibroblasts. They cause latent infection of salivary gland and other organs. Example: Cytomegalovirus.

They have a narrow host range and replicate in lymphoblastoid cells. They are specific for either B or T lymphocytes and causes latent infection in lymphoid tissue Example: Epstein – Barr Virus. Eight different types of herpes viruses are known whose primary hosts are humans. They have been designated as Human herpes virus type 1-8.

The herpes simplex virus (HSV) occurs naturally only in humans, but it can produce experimental infection in laboratory animals. There are two types of the herpes simplex virus. HSV type 1 (Human herpes virus type 1) is isolated from lesions in and around the mouth and is transmitted by direct contact or droplet spread from carrier. HSV type 2 (Human herpes virus type 2 or HHV type 2) is responsible for the genital herpes infections transmitted venereally.

Herpes simplex is one of the most common viral infection in humans, the sources of infection are saliva, skin lesions or respiratory secretions. In type 2, transmission occurs by close contact and may be veneral in genital herpes. The virus enters through defects in the skin or mucous membranes and multiples
locally, with cell to cell spread.

The herpes lesions are thin walled, umbilicated vesicles, the roof of which breaks down, leaving tiny superficial ulcers. They heal without scarring.

The clinical manifestations depend on the site of infection, age and immune status of the host and the antigenic type of the virus. They are

Smears are prepared from the lesions, from the vesicles and stained with 1% aqueous solution of toluidine blue ‘O’ for 15 seconds. Multinucleated giant cells with faceted nuclei with ground glass chromatin (Tzanck cells) are observed.

Inoculation in mice and on chick embryo CAM is insensitive. Primary human embryonic kidney, human amnion cells are susceptible, but human diploid fibroblasts are preferred. Vesicle fluid, spinal fluid, saliva and swabs may be used. Cytopathic changes may appear as early as 24-48 hrs.

Antibodies develop within a few days of infection and rise in titre of antibodies may be demonstrated by ELISA, neutralization or complement fixation tests. Chemotherapy Indoxyuridine used topically in eye and skin infection, acyclovir and vidarabine are given for deep and systemic infections.

In 1889, Von Bokay had suggested that varicella (Chicken pox) and herpes zoster are different manifestations of the same virus infection. The virus is therefore called Varicella zoster virus (VZV). The chicken pox follows primary infection in a non immune individual, while herpes zoster is a reaction of the latent virus when the immunity has fallen to infective levels.

VZV is similar to the herpes simplex virus in its morphology. It can be grown in cultures of human fibroblasts human amnion or HeLa cells. Chicken pox is one of the mildest and most common of child hood infections. The disease may, occur at any age.

Cytomegaloviruses (CMV) formerly known as salivary gland viruses are a group of ubiquitous herpes viruses of humans and animals. They are characterized by enlargement of infected cells and intranuclear inclusions.

In 1926, cytomegalia presumed to be due to viral infection was reported in the salivary glands of guinea pigs and children and the viral agent was called the ‘salivary gland virus’.

A number of different viruses apparently ‘Passenger Viruses’ were isolated from cultured lymphoma cells. Epstein, Barr and Achong in 1964 observed a new type of herpes virus and named it has ‘EB Virus’ affecting B lymphocytes of only human and some sub human primate B cells have receptors (CD21 molecules)
for the virus.

The source of infection is usually the saliva of infected persons who shed the virus in oropharyngeal secretions. Intimate oral contact,as in kissing, appears to be the predominant mode of transmission. This accounts for infectious mononucleosis being called as ‘The kissing disease’.

A herpes virus, first isolated in 1986 from the peripheral blood of patients with lympho proliforative disease called as human B lymphotropic virus, renamed as HHV – 6. HHV – 7 was isolated in 1990 from peripheral CD4 cells of a healthy person appears to be widely distributed and transmitted through saliva.

In 1994, DNA sequences presumed to represent a new herpes virus from tissues of Kaposi’s sarcoma from AIDS patients was named as HHV8. Later Kaposi’s sarcoma was identified in persons not infected with HIV and referred to as Kaposi’s Sarcomaassociated Herpes Virus (KSHV).