Till 1965, Calvin cycle is the only pathway for CO2 fixation. But in 1965, Kortschak, Hart and Burr made observations in sugarcane and found C4 or dicarboxylic acid pathway. Malate and aspartate are the major labelled products. This observation was confirmed by Hatch & Slack in 1967.

This alternate pathway for the fixation of CO2 was found in several tropical and sub-tropical grasses and some dicots. C4 cycle is discovered in more than 1000 species. Among them 300 species belong to dicots and rest of them are monocots.

C4 plants represent about 5% of Earth’s plant biomass and 1% of its known plant species. Despite this scarcity, they account for about 30% of terrestrial carbon fixation. Increasing the proportion of C4 plants on earth could assist biosequestration of CO2 and represent an important climate change avoidance strategy.

C4 pathway is completed in two phases, first phase takes place in stroma of mesophyll cells, where the CO2
acceptor molecule is 3-Carbon compound, phosphoenol pyruvate (PEP) to form 4-carbon Oxalo acetic acid (OAA). The first product is a 4-carbon and so it is named as C4 cycle.

oxalo acetic acid is a dicarboxylic acid and hence this cycle is also known as dicarboxylic acid pathway (Figure 13.18). Carbon dioxide fixation takes place in two places one in mesophyll and another in bundle sheath cell (di carboxylation pathway).

It is the adaptation of tropical and sub tropical plants growing in warm and dry conditions. Fixation of CO2 with minimal loss is due to absence of photorespiration. C4 plants require 5 ATP and 2 NADPH + H+ to fix one molecule of CO2. 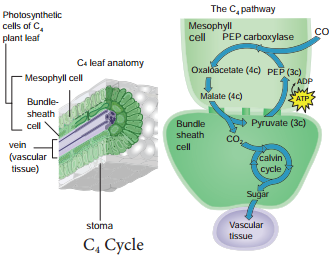 Oxaloacetic acid (OAA) is converted into malic acid or aspartic acid and is transported to the bundle sheath cells through plasmodesmata.

Malic acid undergoes decarboxylation and produces a 3 carbon compound Pyruvic acid and CO2. The released CO2 combines with RUBP and follows the calvin cycle and finally sugar is released to the phloem. Pyruvic acid is transported to the mesophyll cells. 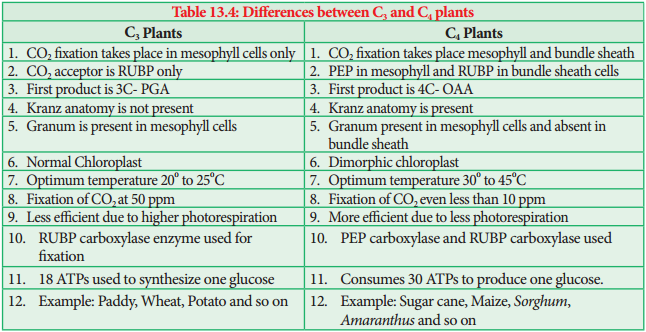