Carbon is found in the native form as graphite. Coal, crude oil and carbonate rocks such as calcite, magnesite etc contains large quantities of carbon in its combined form with other elements. Silicon occurs as silica (sand and quartz crystal). Silicate minerals and clay are other important sources for silicon. 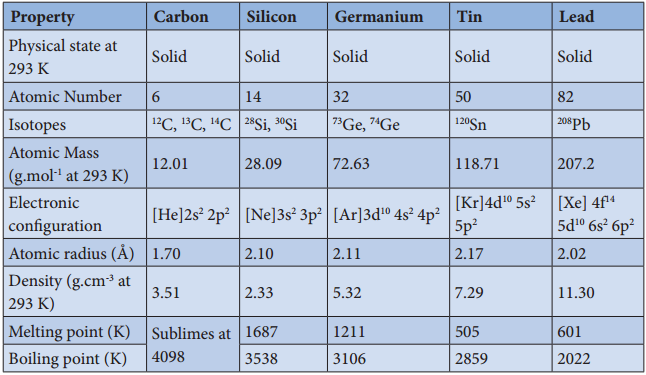 Catenation is an ability of an element to form chain of atoms. The following conditions are necessary for catenation.

Carbon possesses all the above properties and forms a wide range of compounds with itself and with other elements such as H, O, N, S and halogens. 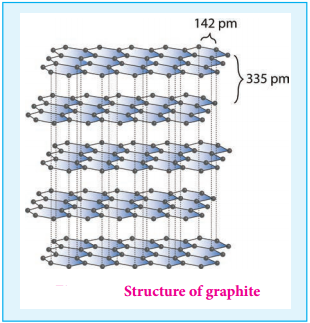 Carbon exists in many allotropic forms. Graphite and diamond are the most common allotropes. Other important allotropes are graphene, fullerenes and carbon nanotubes.

Graphite is the most stable allotropic form of carbon at normal temperature and pressure. It is soft and conducts electricity. It is composed of flat two dimensional sheets of carbon atoms. Each sheet is a hexagonal net of sp2 hybridised carbon atoms with a C-C bond length of 1.41 Å which is close to the C-C bond distance in benzene (1.40 Å). Each carbon atom forms three σ bonds with three neighbouring carbon atoms using three of its valence electrons and the fourth electron present in the unhybridised p orbital forms a π-bond.

These π electrons are delocalised over the entire sheet which is responsible for its electrical conductivity. The successive carbon sheets are held together by weak vander Waals forces. The distance between successive sheet is 3.40 Å. It is used as a lubricant either on its own or as a graphited oil.

Unlike graphite the other allotrope diamond is very hard. The carbon atoms in diamond are sp3 hybridised and bonded to four neighbouring carbon atoms by σ bonds with a C-C bond length of 1.54 Å. This results in a tetrahedral arrangement around each carbon atom that extends to the entire lattice as shown in figure 2.5. Since all four valance electrons of carbon are involved in bonding there is no free electrons for conductivity. Being the hardest element, it used for sharpening hard tools, cutting glasses, making bores and rock drilling. 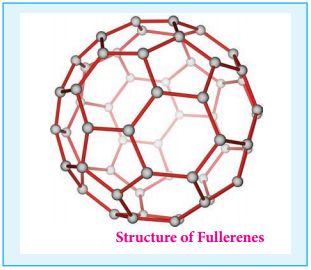 It has a fused ring structure consists of 20 six membered rings and 12 five membered rings. Each carbon atom is sp2 hybridised and forms three σ bonds & a delocalised π bond giving aromatic character to these molecules. The C-C bond distance is 1.44 Å and C = C distance 1.38 Å.

Carbon nanotubes, another recently discovered allotropes, have graphite like tubes with fullerene ends. Along the axis, these nanotubes are stronger than steel and conduct electricity. These have many applications in nanoscale electronics, catalysis, polymers and medicine.

Another allotrophic form of carbon is graphene. It has a single planar sheet of sp2 hybridised carbon atoms that are densely packed in a honeycomb crystal lattice. Carbon monoxide can be prepared by the reaction of carbon with limited amount of oxygen. 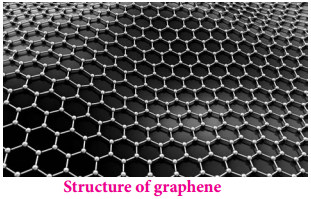 The producer gas is then passed through a solution of copper(I)chloride under pressure which results in the formation of CuCl(CO).2H2O. At reduced pressures this solution releases the pure carbon monoxide. Pure carbon monoxide is prepared by warming methanoic acid with concentrated sulphuric acid which acts as a dehydrating agent.

When carbon monoxide is treated with chlorine in presence of light or charcoal, it forms a poisonous gas carbonyl chloride, which is also known as phosgene. It is used in the synthesis of isocyanates.

Under high temperature and pressure a mixture of carbon monoxide and hydrogen (synthetic gas or syn gas) gives methanol.

In oxo process, ethene is mixed with carbon monoxide and hydrogen gas to produce propanal.

The reaction of carbon monoxide with hydrogen at a pressure of less than 50 atm using metal catalysts at 500 – 700 K yields saturated and unsaturated hydrocarbons.

It has a linear structure. In carbon monoxide, three electron pairs are shared between carbon and oxygen. The bonding can be explained using molecular orbital theory as discussed in XI standard. The C-O bond distance is 1.128Å. The structure can be considered as the resonance hybrid of the following two canonical forms.

Carbon dioxide occurs in nature in free state as well as in the combined state. It is a constituent of air (0.03%). It occurs in rock as calcium carbonate and magnesium carbonate.

It is a colourless, nonflammable gas and is heavier than air. Its critical temperature is 31° C and can be readily liquefied.

Carbon dioxide is a very stable compound. Even at 3100 K only 76% decomposes to form carbon monoxide and oxygen. At still higher temperature it decomposes into carbon and oxygen.

At elevated temperatures, it acts as a strong oxidising agent. For example,
CO2 + 2Mg → 2MgO + C

The equilibrium involved in the reaction between carbon dioxide and hydrogen, has many industrial applications and is called water gas equilibrium.

The aqueous solution of carbon dioxide is slightly acidic as it forms carbonic acid.

Carbon dioxide has a linear structure with equal bond distance for the both C-O bonds. In this molecule there is two C-O sigma bond. In addition there is 3c-4e bond covering all the three atoms.

On commercial scale, reaction of silicon with hydrogen chloride gas occurs above 600 K

The chloride ion in silicon tetrachloride can be substituted by nucleophile such as OH, OR, etc using suitable reagents. For example, it forms silicic esters with alcohols.

Silicones or poly siloxanes are organo silicon polymers with general empirical formula (R2SiO). Since their empirical formula is similar to that of ketone (R2CO), they were named “silicones”. These silicones may be linear or cross linked. Because of their very high thermal stability they are called high – temperature polymers. 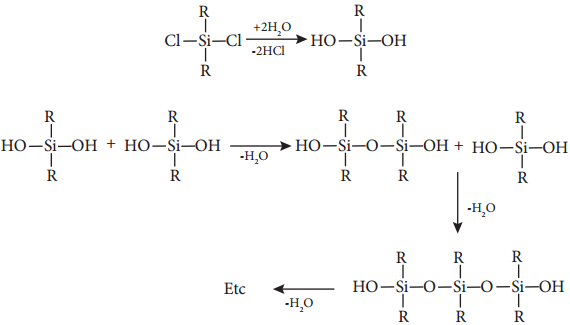 The hydrolysis of monoalkylchloro silanes RSiCl3 yields to a very complex cross linked polymer. Linear silicones can be converted into cyclic or ring silicones when water molecules is removed from the terminal – OH groups.

They are obtained by the hydrolysis and subsequent condensation of dialkyl or diaryl silicon chlorides.

These silicones are bridged together by methylene or similar groups.

They are obtained by blending silicones with organic resins such as acrylic esters.

These are obtained by the hydrolysis of R2SiCl2.

They are obtained by hydrolysis of RSiCl3

The extent of cross linking and nature of alkyl group determine the nature of polymer. They range from oily liquids to rubber like solids. All silicones are water repellent. This property arises due to the presence of organic side groups that surrounds the silicon which makes the molecule looks like an alkane.

They are also thermal and electrical insulators. Chemically they are inert. Lower silicones are oily liquids whereas higher silicones with long chain structure are waxy solids. The viscosity of silicon oil remains constant and doesn’t change with temperature and they don’t thicken during winter.

The mineral which contains silicon and oxygen in tetrahedral [SiO4]2- units linked together in different patterns are called silicates. Nearly 95% of the earth crust is composed of silicate minerals and silica. The glass and ceramic industries are based on the chemistry silicates.

Silicates are classified into various types based on the way in which the tetrahedral units, [SiO4]4- are
linked together. 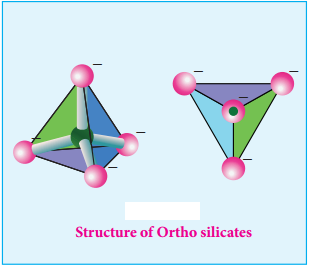 Silicates which contain [Si2O7]6- ions are called pyro silicates (or) Soro silicates. They are formed by joining two [SiO4]4- tetrahedral units by sharing one oxygen atom at one corner (one oxygen is removed while joining). Example: Thortveitite – Sc2Si2O7

Silicates which contain (SiO3)n2n- which are formed by linking three or more tetrahedral SiO42- units cyclically are called cyclic silicates. Each silicate unit shares two of its oxygen atoms with other units.

Example: Beryl [Be3Al2 (SiO3)6] (an aluminosilicate with each aluminium is surrounded by 6 oxygen atoms octahedrally)

Silicates which contain ‘n’ number of silicate units linked by sharing two or more oxygen atoms are called inosilicates. They are further classified as chain silicates and double chain silicates.

These are fibrous and noncombustible silicates. Therefore they are used for thermal insulation material, brake linings, construction material and filters. Asbestos being carcinogenic silicates, their applications are restricted.

Silicates which contain (Si2O5)n2n- are called sheet or phyllo silicates. In these, Each [SiO4]4- tetrahedron unit shares three oxygen atoms with others and thus by forming twodimensional sheets. These sheets silicates form layered structures in which silicate sheets are stacked over each other. The attractive forces between these layers are very weak, hence they can be cleaved easily just like graphite. 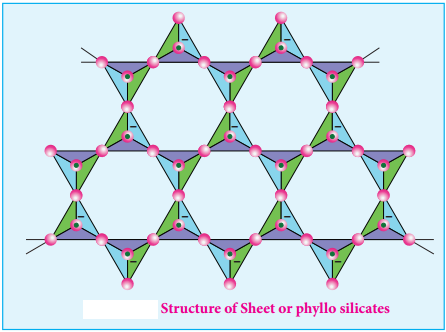 Silicates in which all the oxygen atoms of [SiO4]2- tetrahedra are shared with other tetrahedra to form three-dimensional network are called three dimensional or tecto silicates. They have general formula (SiO2)n.

Zeolites are three-dimensional crystalline solids containing aluminium, silicon, and oxygen in their regular three dimensional framework. They are hydrated sodium alumino silicates with general formula Na2O.(Al2O3).x(SiO2).yH2O (x=2 to 10; y=2 to 6).

Zeolites have porous structure in which the monovalent sodium ions and water molecules are loosely held. The Si and Al atoms are tetrahedrally coordinated with each other through shared oxygen atoms. Zeolites are similar to clay minerals but they differ in their crystalline structure.

Zeolites have a three dimensional crystalline structure looks like a honeycomb consisting of a network of interconnected tunnels and cages. Water molecules moves freely in and out of these pores but the zeolite framework remains rigid.

Another special aspect of this structure is that the pore/channel sizes are nearly uniform, allowing the crystal to act as a molecular sieve. We have already discussed in XI standard, the removal of permanent hardness of water using zeolites.