Enzymes Definition and its Types

Enzymes are globular proteins that catalyse the many thousands of metabolic reactions taking place within cells and organism. The molecules involved in such reactions are metabolites. Metabolism consists of chains and cycles of enzyme-catalysed reactions, such as respiration, photosynthesis, protein synthesis and other pathways. These reactions are classified as:-

Anabolic (Building up of Organic Molecules):
Synthesis of proteins from amino acids and synthesis of polysaccharides from simple sugars are examples of anabolic reactions.

Catabolic (Breaking Down of larger Molecules):
Digestion of complex foods and the breaking down of sugar in respiration are examples of catabolic reactions (Figure 8.16). As molecules react, they become unstable, high energy intermediates. But they are in this transition state only momentarily. Energy is required to raise molecules to this transition state and this minimum energy needed is called the activation energy. This could be explained schematically by ‘boulder on hillside’ model of activation energy (Figure 8.17).

Lock and Key Mechanism of Enzyme

In a enzyme catalysed reaction, the starting substance is the substrate. It is converted to the product. The substrate binds to the specially formed pocket in the enzyme – the active site, this is called lock and key mechanism of enzyme action.

As the enzyme and substrate form a ES complex, the substrate is raised in energy to a transition state and then breaks down into products plus unchanged enzyme (Figure 8.18). 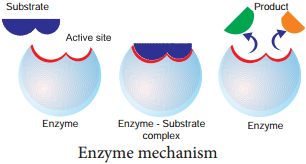 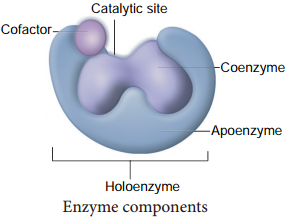 Apoenzyme:
The inactive enzyme without its non protein component.

Help to increase the rate of reaction catalysed by enzymes. Example: Salivary amylase activity is increased in the presence of chloride ions.

Are organic molecules that assist in catalytic function of an enzyme. Flavin adenine dinucleotide (FAD) contains riboflavin (vit B2), the function of which is to accept hydrogen. ‘Haem’ is an iron-containing prosthetic group with an iron atom at its centre.

Which act as cofactors but do not remain attached to the enzyme. The essential chemical components of many coenzymes are vitamins. Eg. NAD, NADP, Coenzyme A, ATP.

Classification of Enzymes
Enzymes are classified into six groups based on their mode of action. 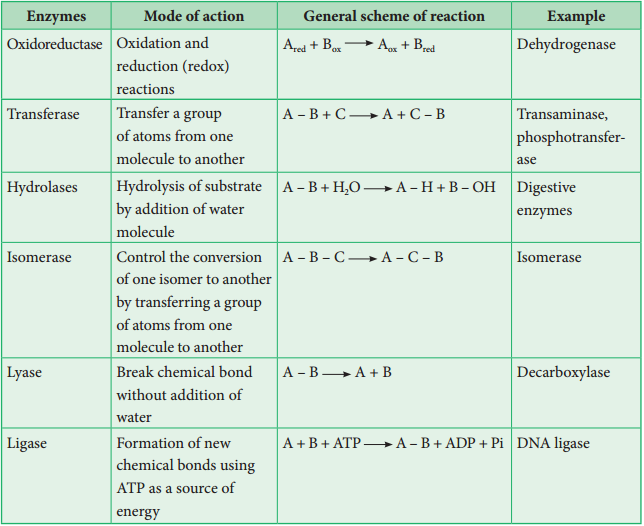