These are the derivatives of hydrocyanic acid (HCN), and is known to exist in two tautomeric forms

In IUPAC system, alkyl cyanides are named as “alkanenitriles” whereas aryl cyanides as “arenecarbonitrile”. 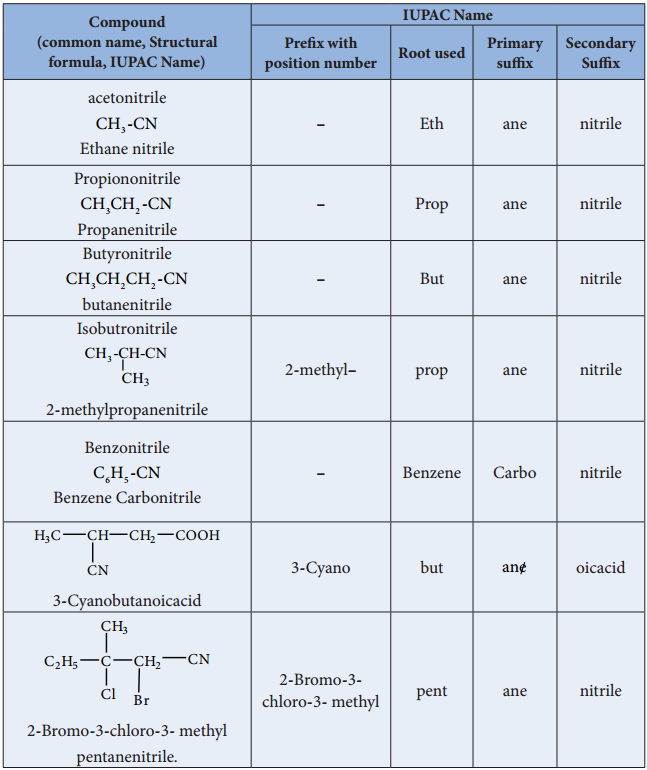 Methods of Preparation of Cyanides

When alkyl halides are treated in the solution NaCN (or) KCN, alkyl cyanides are obtained. In this reaction a new carbon – carbon bond is formed.

Aryl cyanide cannot be prepared in this method because of their less reactivity towards nucleophilic substitution. Aryl cyanides are prepared using Sandmeyers reactions.

2. By Dehydration of Primary Amides and Aldoximes with P2O5

3. By dehydration of ammonium carboxylates with P2O5

This method suitable for large scale preparation of alkyl cyanides.

The lower members (up to C14) are colourless liquids with a strong characteristic sweet smell. The higher members are crystalline solids, They are moderately soluble in water but freely souble in organic solvents. They are poisonous. They have higher boiling points than analogous acetylenes due to their high dipole moments.

On boiling with alkali (or) a dilute mineral acid, the cyanides are hydrolysed to give carboxylic acids.

Self condensation of two molecules of alkyl nitrile (containing α-H atom) in the presence of sodium to form iminonitrile.

(b) The nitriles containing α – hydrogen also undergo condensation with esters in the presence of sodamide in ether to form ketonitriles. This reaction is known as “Levine and Hauser” acetylation.

They are commonly named as Alkyl isocyanides. The IUPAC system names them as alkylcarbylamines

Methods of Preparation of Isocyanides

Both aromatic as well as aliphatic amines on treatment with CHCl3 in the presence of KOH give carbylamines.

Ethyl bromide on heating with ethanolic solution of AgCN give ethyl isocyanide as major product and ethyl cyanide as minor product.

3. From N – alkyl formamide. By reaction with POCl3 in pyridine.

Alkyl isocyanides are not hydrolysed by alkalies. However they are hydrolysed with dilute mineral acids to give primary amines and formic acids.

When reduced catalytically (or) by nascent hydrogen, they give secondary amines.

When Alkyl isocyanides and heated at 250°C, they change into the more stable, isomeric cyanides

1. Alkyl cyanides are important intermediates in the organic synthesis of larger number of compounds like acids, amides, esters, amines etc.

2. Nitriles are used in textile industry in the manufacture of nitrile rubber and also as a solvent particularly in perfume industry.