Crystalline solid is characterised by a definite orientation of atoms, ions or molecules, relative to one another in a three dimensional pattern. The regular arrangement of these species throughout the crystal is called a crystal lattice. A basic repeating structural unit of a crystalline solid is called a unit cell. The following figure illustrates the lattice point and the unit cell. 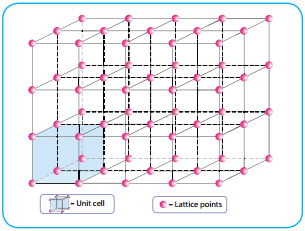 A crystal may be considered to consist of large number of unit cells, each one in direct contact with its nearer neighbour and all similarly oriented in space. The number of nearest neighbours that surrounding a particle in a crystal is called the coordination number of that particle.

A unit cell is characterised by the three edge lengths or lattice constants a, b and c and the angle between the edges α, β and γ 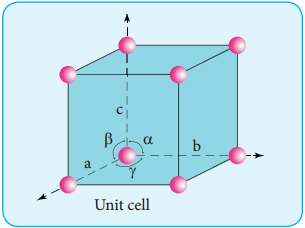 A unit cell is the smallest portion of a crystal lattice that shows the three-dimensional pattern of the entire crystal. A crystal can be thought of as the same unit cell repeated over and over in three dimensions.

A lattice system is a class of lattices with the same set of lattice point groups, which are subgroups of the arithmetic crystal classes. The 14 Bravais lattices are grouped into seven lattice systems: triclinic, monoclinic, orthorhombic, tetragonal, rhombohedral, hexagonal, and cubic.

A lattice is a hypothetical regular and periodic arrangement of points in space. It is used to describe the structure of a crystal. A basis is a collection of atoms in particular fixed arrangement in space.

Point in a crystal with specific arrangement of atoms, reproduced many times in a macroscopic crystal. The choice of the lattice point within the unit cell is arbitrary.

Arrangement of atoms within the unit cell.

There are four types of crystals:

A lattice is an ordered array of points describing the arrangement of particles that form a crystal. The unit cell of a crystal is defined by the lattice points. For example, the image shown here is the unit cell of a primitive cubic structure. In the structure drawn, all of the particles (yellow) are the same.

The arrangement of atoms in a crystal. Each point represents one or more atoms in the actual crystal, and if the points are connected by lines, a crystal lattice is formed; the lattice is divided into a number of identical blocks, or unit cells, characteristic of the Bravais lattices.

A lattice is an abstract structure studied in the mathematical subdisciplines of order theory and abstract algebra. It consists of a partially ordered set in which every two elements have a unique supremum (also called a least upper bound or join) and a unique infinitum (also called a greatest lower bound or meet).

Crystals are composed of three-dimensional patterns. These patterns consist of atoms or groups of atoms in ordered and symmetrical arrangements which are repeated at regular intervals keeping the same orientation to one another.

A lattice is made by crisscrossing pieces of lath, thin strips of wood, at right angles. The small squares left open between the strips of wood create a gridlike, ornamental pattern. Panels of lattice often enclose other structures, such as a garden bench or gazebo.

A lattice point is a point at the intersection of two or more grid lines in a regularly spaced array of points, which is a point lattice. In a plane, point lattices can be constructed having unit cells in the shape of a square, rectangle, hexagon, and other shapes.

The most common and important are face-centred cubic (FCC) and hexagonal close-packed (HCP) structures. To get a clear picture of arrangements of atoms in these two crystal structures, it is necessary to examine the geometry of possible close-packing of atoms.

There are four types of crystals: covalent, ionic, metallic, and molecular. Each type has a different type of connection, or bond, between its atoms. The type of atoms and the arrangement of bonds dictate what type of crystal is formed.