It is one of the carbon pathways identified in succulent plants growing in semi-arid or xerophytic condition. This was first observed in crassulaceae family plants like Bryophyllum, Sedum, Kalanchoe and is the reason behind the name of this cycle. It is also noticed in plants from other families Examples: Agave, Opuntia, Pineapple and Orchids.

The stomata are closed during day and are open during night (Scotoactive). This reverse stomatal rhythm helps to conserve water loss through transpiration and will stop the fixation of CO2 during the day time. At night time CAM plants fix CO2 with the help of Phospho Enol Pyruvic acid (PEP) and produce oxalo acetic acid (OAA). Subsequently OAA is converted into malic acid like C4 cycle and gets accumulated in vacuole increasing the acidity.

During the day time stomata are closed and malic acid is decarboxylated into pyruvic acid resulting in the decrease of acidity. CO2 thus formed enters into Calvin Cycle and produces carbohydrates (Figure 13.19). 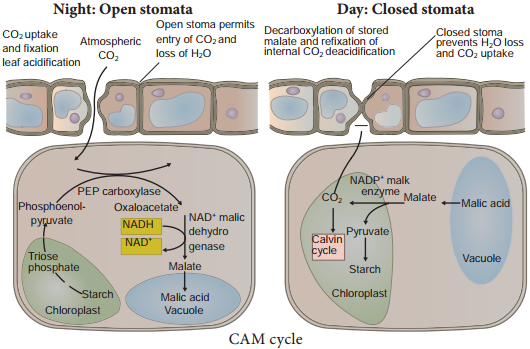 Crassulacean acid metabolism (CAM) is a photosynthetic adaptation to periodic water supply, occurring in plants in arid regions (e.g., cacti) or in tropical epiphytes (e.g., orchids and bromeliads). CAM plants close their stomata during the day and take up CO2 at night, when the air temperature is lower.

Crassulacean acid metabolism, also known as CAM photosynthesis, is a carbon fixation pathway that evolved in some plants as an adaptation to arid conditions that allows a plant to photosynthesize during the day, but only exchange gases at night.

In CAM plants, carbon dioxide is only gathered at night, when the stomata open. Click for more detail. During the day, the malic acid is converted back to carbon dioxide. This type of photosynthesis is known as Crassulacean Acid Metabolism because of the storage of carbon dioxide at night as an acid.

Some plants that are adapted to dry environments, such as cacti and pineapples, use the crassulacean acid metabolism (CAM) pathway to minimize photorespiration. This name comes from the family of plants, the Crassulaceae, in which scientists first discovered the pathway. Image of a succulent.

The CAM plants close their stomata at the time of day and open it in night. When the stomata remains closed then this will prevent the loss of water by the process of transpiration. This process also prevents the carbon dioxide gas being entering into the plant leaves.

Crassulacean acid metabolism (CAM) is a photosynthetic adaptation to periodic water supply, occurring in plants in arid regions (e.g., cacti) or in tropical epiphytes (e.g., orchids and bromeliads). CAM plants close their stomata during the day and take up CO2 at night, when the air temperature is lower.

Unlike plants in wetter environments, CAM plants absorb and store carbon dioxide through open pores in their leaves at night, when water is less likely to evaporate. During the day, the pores, also called stomata, stay closed while the plant uses sunlight to convert carbon dioxide into energy, minimizing water loss.

Without enough light, a plant cannot photosynthesise very quickly – even if there is plenty of water and carbon dioxide and a suitable temperature. Increasing the light intensity increases the rate of photosynthesis, until some other factor – a limiting factor – becomes in short supply.

But there are few plants like Peepal which gives out Oxygen at night by CAM photosynthesis which are the plants the Crassulaceae family. During daylight hours, plants take in carbon dioxide and release oxygen through photosynthesis, and at night only about half that carbon is then released through respiration.