Water is one of the most abundant compounds of hydrogen and our earth’s surface contains approximately 70 % of ocean which is the major source of water. However, sea water contains many dissolved salts hence it can not be used directly. Water is essential for all living things and our body contains about 65% water. 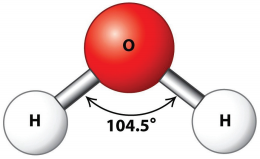 Water is a colourless and volatile liquid. The peculiar properties of water in the condensed phases are due to the presence of inter molecular hydrogen bonding between water molecules. Hydrogen bonding is responsible for the high melting and boiling points of water. Some of the physical parameters of water are listed in Table 4.2. 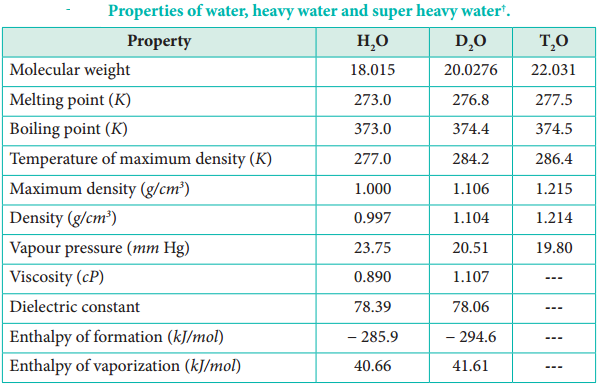 ‘Unless otherwise stated, all data are at 298 K.

Water reacts with metals, non-metals and other compounds differently. The most reactive metals are the alkali metals. They decompose water even in cold with the evolution of hydrogen leaving an alkali solution.

The group 2 metals (except beryllium) react in a similar way but less violently. The hydroxides are less soluble than those of Group 1.

Some transition metals react with hot water or steam to form the corresponding oxides. For example, steam passed over red hot iron results in the formation of iron oxide with the release of hydrogen.

Lead and copper decompose water only at a white heat. Silver, gold, mercury and platinum do not have any effect on water. In the elemental form, the non-metals such as carbon, sulphur and phosphorus normally do not react with water. However, as we have seen earlier, carbon will react with steam when it is red (or white) hot to give water gas.

On the other hand, the halogens react with water to give an acidic solution. For example, chlorine forms hydrochloric acid and hypo chlorous acid. It is responsible for the antibacterial action of chlorine water, and for its use as bleach.

In a similar way, compounds of nonmetals react with water to give acidic or alkaline solutions. For example, solutions of carbonates are slightly alkaline.

Many salts crystallized from aqueous solutions form hydrated crystals. The water in the hydrated salts may form co-ordinate bond or just present in interstitial positions of crystals.

BaCl2. 2H2O – Both the water molecules are present in interstitial positions.

CuSO4.5H2O – In this compound four water molecules form co-ordinate bonds while the fifth water molecule, present outside the co-ordination, can form intermolecular hydrogen bond with another molecule. [Cu(H2O)4)]SO4.2H2O 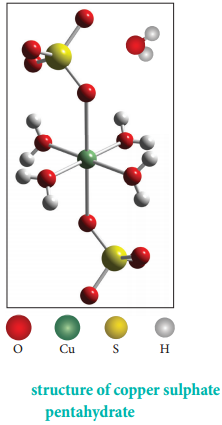 Hard water contains high amounts of mineral ions. The most common ions found in hard water are the soluble metal cations such as magnesium & calcium, though iron, aluminium, and manganese may also be found in certain areas.

Presence of these metal salts in the form of bicarbonate, chloride and sulphate in water makes water ‘hard’. When hard water is boiled carbonates of magnesium and calcium present in it gets precipitated. On the other hand, water free from soluble salts of calcium and magnesium is called sof water. The hardness of water is of two types, viz., temporary hardness and permanent hardness.

Temporary Hardness and its Removal:

Temporary hardness is primarily due to the presence of soluble bicarbonates of magnesium and calcium. This can be removed by boiling the hard water followed by filtration. Upon boiling, these salts decompose into insoluble carbonate which leads to their precipitation. The magnesium carbonate thus formed further hydrolysed to give insoluble magnesium hydroxide.

The resulting precipitates can be removed by filtration.

Alternatively, we can use Clark’s method in which, calculated amount of lime is added to hard water containing the magnesium and calcium, and the resulting carbonates and hydroxides can be filtered – off

In another way to soften the hard water is by using a process called ionexchange. That is, hardness can be removed by passing through an ion-exchange bed like zeolites or column containing ionexchange resin. Zeolites are hydrated sodium alumino-silicates with a general formula,
Na2O∙Al2O3.xSiO2.yH2O (x = 2 to 10, y = 2 to 6).

Zeolites have porous structure in which the monovalent sodium ions are loosely held and can be exchanged with hardness producing metal ions (M = Ca2+ or Mg2+) in water. The complex structure can conveniently be represented as Na2 – Z with sodium as exchangeable cations.

When exhausted, the materials can be regenerated by treating with aqueous sodium chloride. The metal ions (Ca2+ and Mg2+) caught in the zeolite (or resin) are released and they get replenished with sodium ions.