Classification of Fungi based on the Host parasitic Relationship

Based on the host parasitic relationship the fungi are grouped into three types.

The fungus neither gets benefit nor harmed by the host parasitic relationship.

The fungus benefited from the host parasitic relationship.

The host is harmed by the fungus in host parasitic relationship.

Diseases caused by the medically important fungi are called Mycoses. Based on their wide spectrum of adaptability, fungi causing human mycoses can be categorized into:

The ability of the fungi to adapt to skin flora and cause infection.

When the immune status of the host is reduced, fungi will induce or cause infection.

Toxins produced by fungi are responsible for the illness or death of patients after ingestion of the contaminated food.

Allergens are secreted by the fungi which cause allergic reaction in the human beings. Mycoses are classified according to the specific site of involvement.

The infection is limited to the outer most layers of the skin and its appendages.

The infection extends deeper into the epidermis and it also invades hair and nails.

The infection extends to dermis, subcutaneous tissue and muscles by any traumatic injury.

The infection originates from lungs and later spreads systemically to other organs. Systemic mycoses along with the opportunistic fungal infection are known as deep mycoses.

The infection occurs when the immune status of the individuals is altered. It is common among immune compromised and immune suppressed patients.

The Aeromycology is the study of air borne fungi, its types and the seasonal variations of allergenic fungal spores in the environment. There are certain fungal pathogens which cause infections associated with workers in mycological laboratories.

Fungi are heterotrophic organisms that exist as saprophytes, commensal or parasites. They are found on decaying vegetative matter and also in soil. Morphological features, cell structure, reproduction, nutritional requirement and thermal dimorphism in the pathogenic fungi are described as follows:

Fungi are eukaryotic with well defined cell wall and intra cellular membrane bound organelles. The cell wall is composed of polysaccharides and chitin. Fungi vary in size and shape. They are broadly divided into two main groups.

The yeasts are unicellular organisms which reproduce by asexual process known as budding or by fission. The cell develops a protuberance that enlarges and separates from the parental cell. The yeasts produce chains of elongated cells known as Pseudohyphae.

Some yeasts reproduce by sexual process Example: Cryptococcus neoformans. Germ tube is special morphology found in Candida albicans. Some are commensal without any medical significance.

The molds grow by apical extension, forming an interwoven mass called as Mycelium, branching filaments known as hyphae. Hyphae that grow on the surface are called vegetative hyphae. They are responsible for the absorption of nutrients. The hyphae that project above the surface are called aerial hyphae and they produce specialized reproductive structures called as conidia.

Depending on cell morphology fungi are divided into four types, they are Yeasts: These are unicellular organisms that divide by budding (Figure 9.1 a & b). Example: Cryptococcus neoformans (Pathogenic), Saccharomyces cerevisiae (Non pathogenic). 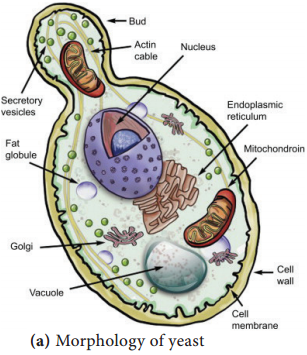 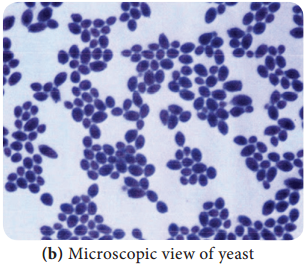 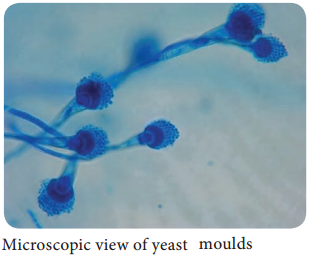 Dimorphic fungi:
These Fungi exist in both yeast at 37°C and filamentous form at 25°C. This Phenomenon is known as Fungal dimorphism (Figure 9.3). 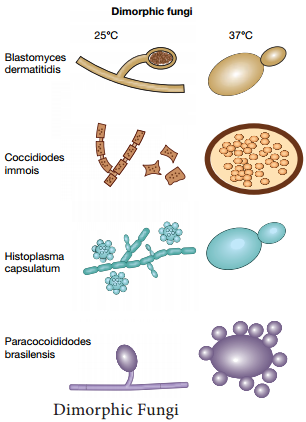 Most of true pathogenic fungi are dimorphic fungi which are composed of darkly coloured hyphal form known as dematiaceous fungi. Some are yeast like and also known as black yeasts.

a. Capsule:
Fungi produce an extra cellular polysaccharide in the form of capsule. Example: Cryptococcus.

b. Cell wall:
Fungi possess a multilayered rigid cell wall exterior to the plasma lemma. The cell wall is made up of chitin, a water insoluble, homopolymer of N-acetyl glucosamine. Chitin synthase is responsible for the bio synthesis of chitin.

d. Cytosol:
Cytosol comprises of mitochondria, microtubules, ribosomes, golgi apparatus, double membrane endoplasmic reticulum and Nucleus. The nuclei of the fungi are enclosed by a membrane and contain most of cellular DNA.

Spores play a major role in reproduction. There may be asexual or sexual cell divisions.

The asexual reproduction involves, budding or fission or mitosis. Fungi produce more than one type of asexual spores. They are microspores (microconidia) and macrospores (macroconidia).

Spores that are present inside sporangium are known as sporangiospores and those that are borne exogenously are called conidiospores (Figure 9.4). Based on the arrangement of conidia they are classified as Acropetal, Basipetal and Sympodial. 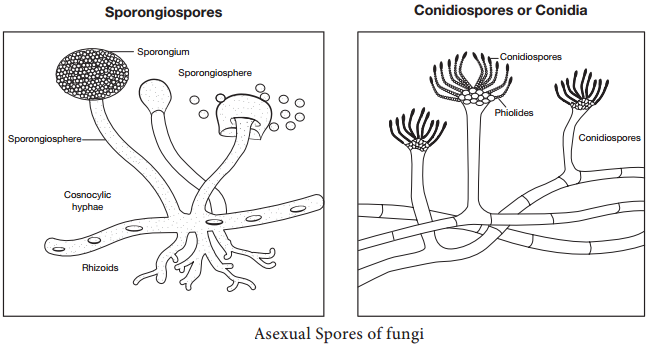 Mycelia sterile are fast growing molds that do not produce spores or conidia. They are medically significant fungi and are difficult to identify.

Fungi are ubiquitous in nature and grow readily in the presence of nitrogen and carbohydrates. Medically significant fungi are Mesophilic. The optimum temperature invitro for majority of the pathogenic fungi is between 25°C and 37°C.

The fungi prefer acidic pH; do not require light for their growth. All fungi are heterotrophs requiring organic nutrients. They absorb their nutrient and do not ingest food. Medically significant fungi are facultative
parasites, capable of causing disease or living on dead organic matter.