Question 3.
How crowded a country is, has little to do with its level of economic development. Give example to show its validity?
Answer:
For example, both Bangladesh and Japan are very densely populated but Japan is far more economically developed than Bangladesh. This is the perfect example for the above’s validity.

Question 4.
Define immigration.
Answer:
When a person enters a new country it is termed as immigration.

Question 5.
What does Emigrations mean?
Answer:
Emigration means when a person leaves a country.

Question 7.
Who are the Emigrants?
Answer:
The emigrants are the people who leave a country.

Question 8.
What is the meaning of population Density?
Answer:
Population density is the number of people living in a unit area of the earth’s surface.

Question 9.
Which is the ultimate resource?
Answer:
Human Resource.

Question 10.
Which of the two continents are there in which almost 3 quarters of world’s people live?
Answer:
Asia and Africa.

Question 12.
What is the most preferrable topography for humans?
Answer:
Plains

Question 13.
Which area of the world has sparse population when it comes to water availability?
Answer:
Deserts.

Question 15.
In which year the world’s population reached 3 billion?
Answer:
In 1959.

Question 17.
Why is the population growth slow in the countries like United Kingdom?
Answer:
Because of both low death and low birth rates.

Question 2.
How can we say that people’s are the nation’s greatest resources and human resource is the ultimate resource?
Answer:
People are the nation’s greatest resources as nature’s bounty becomes significant only when people find it useful. It is people with their demands and abilities that turn, them into resources. Hence, human resource is the ultimate resource. Healthy, educated and motivated people develop resources as per their requirements.

Look at the picture given below and answer the following questions: 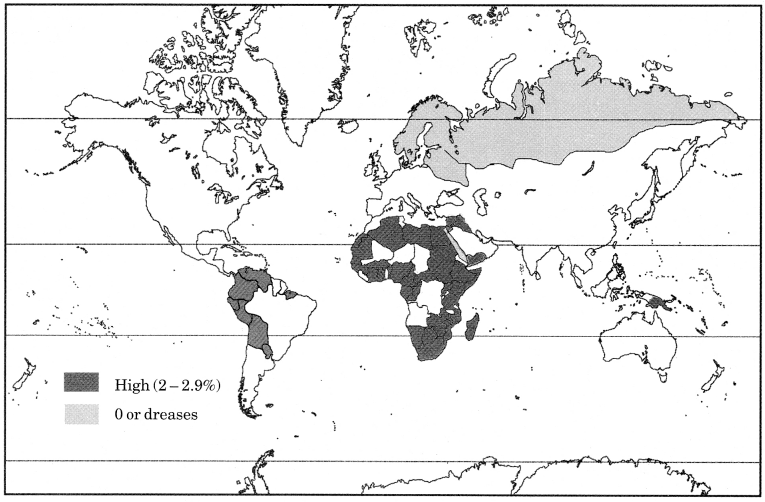