You can also practice NCERT Solutions for Class 6 History Chapter 7 Questions and Answers on LearnInsta.com.

Question 1.
Where was Anagha going?
Answer:
Anagha was going on a school trip to Varanasi.

Question 2.
Why did Buddha leave the comforts of his home?
Answer:
In search of knowledge.

Question 3.
In which language did Buddha teach the ordinary people?
Answer:
Prakrit.

Question 5.
Who was Gargi?
Answer:
Gargi was a woman Upanishadic thinker.

Question 6.
Where is Karle located?
Answer:
Karle is located in Maharashtra.

Question 7.
Who was Zoroaster?
Answer:
Zoroaster was an Iranian prophet.

Question 8.
What is Avesta?
Answer:
Zoroaster’s teachings are contained in a book called the Avesta.

Question 11.
What does Upanishad contain?
Answer:
The texts contain conversations between teachers and students. Often, ideas were presented
through simple dialogues.

Question 1.
Who was Buddha?
Answer:
Buddha was the founder of Buddhism. He was bom about 2,500 years ago. The real name of Buddha was Siddhartha. He was a Kshatriya and belonged to a small gana known as the sakya gana.

Question 2.
What were the thinkers trying to understand in the society?
Answer:
The thinkers were trying to find out the true meaning of life.

Question 4.
Why did Kisagotami meet Gautam Buddha?
Answer:
There was a woman named Kisagotami, who suffered from the loss of her son. She came to Gautam Buddha to ask his help to bring back her son to life.

Question 5.
Why was Panini famous?
Answer:
Panini was a grammarian, who prepared a grammar for Sanskrit. He arranged the vowels and consonants in a special order. He used these to write down the rules of the language in short formulae, around 3000 of them.

Question 6.
Name the women thinker who is mentioned in the Upanishada?
Answer:
Her name is Gargi. She was famous for her learning and she participated in the meetings held in royal courts.

Question 7.
Who was Satyakama Jabala?
Answer:
Satyakama Jabala was the son of a slave women Jabali. He had a deep desire to learn about reality, was accepted as a student by a Brahmin teacher named Gautama and Jabala became one of the best known thinkers of the time.

Question 1.
Describe in brief about the Buddha.
Answer:
Gautam Buddha was the founder of Buddhism. His earlier name was Siddhartha. He was born about 2,500 years ago. The Buddha belonged to a small gana known as the Sakya Gana, and was a Kshatriya. When he was a young man, he left the comforts of his home in search of knowledge. He wandered for several years, meeting and holding discussions with other thinkers.

He finally decided to find his own path to realization, and meditated for days under a peepal tree in Bodh Gaya in Bihar, where he attained enlightenment. After that he was known as the Buddha or the wise one. He then went to Sarnath, near Varanasi, where he taught for the first time. He spent the rest of his life travelling on foot, going from place to place, teaching people, till he passed away at Kusinara.

Question 2.
What were the teachings of the Buddha?
Answer:

Question 3.
What were the questions which the thinkers tried to find out?
Answer:

“All beings,” said Mahavira “long to live. To all things life is dear.”
Ordinary people could understand the teachings of Mahavira and his followers, because they used Prakrit. There were several form of Prakrit, used in different part of the country, and named after the regions in which they were used. 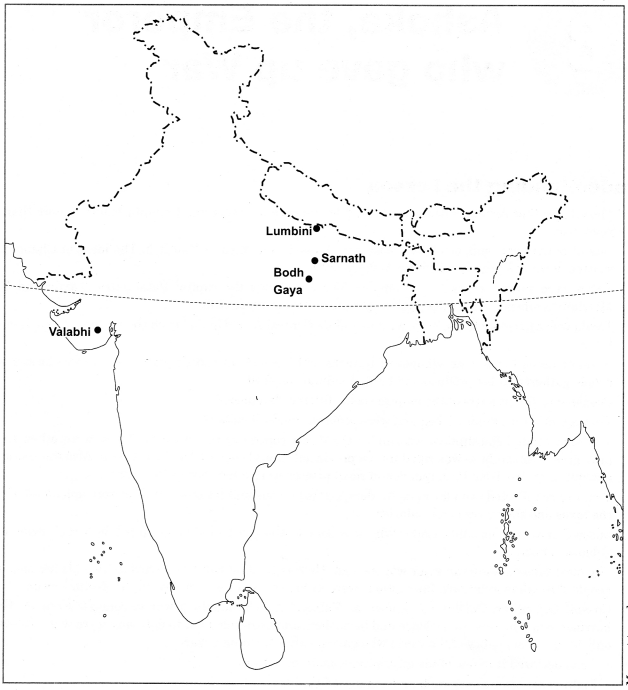