You can also practice NCERT Solutions for Class 6 Geography Chapter 5 Questions and Answers on LearnInsta.com.

Question 1.
Which planet has life?
Answer:
The Earth.

Question 6.
What is called gaseous layers that surround the Earth?
Answer:
Atmosphere.

Question 8.
How many continents are there in our Earth?
Answer:
There are seven major continents.

Question 9.
How are continents separated?
Answer:
Continents are separated by large water bodies.

Question 12.
What is proportion of water on the Earth?
Answer:
More than 71% of the Earth is covered with water.

Question 13.
What do you mean by hydrosphere?
Answer:
Water part of the land is called hydrosphere.

Question 14.
Name the forms of hydrosphere.
Answer:
Hydrosphere consists of water in all its forms as—running water, ice, underground water and water vapour in atmosphere, all comprise the hydrosphere.

Question 1.
What do you understand about Lithosphere?
Answer:
The word Lithosphere is made up of Latin word ‘litho’ which means ‘stone’. Hence the lithosphere is the solid portion of Earth. It comprises the rocks of the Earth’s crust and the thin layers of soil that contain nutrient elements which sustain organisms.

There are two main divisions of the Earth’ surface. The large landmasses are known as the continents and the huge water bodies are called the ocean basins. All the oceans of the world are connected with one another.

Question 2.
Describe the persons who climb on peak of the Mount Everest.
Answer:
Mt. Everest is the highest mountain. The peak of Mt. Everest is 8,848 metres above the sea level. Edmund Hillary, resident of New Zealand and Tenzing Norgay Sherpa of India were the first men to climb the highest mountain peak Mt. Everest on the planet Earth on 29th May, 1953. Junko Tabei (Japan) was the first woman who reached on 16th May, 1975. The first Indian women was Bachendri Pal who climbed the highest peak on 23rd May, 1984.

Question 3.
Describe the Hydrosphere.
Answer:
Water covers very big area of the Earth’s surface and this water area of Earth is called hydrosphere. More than 71% area of the Earth is covered with water. The hydrosphere comprises of water in all its forms, that is, ice in glaciers, water in oceans and rivers and in lakes, underground water and the water vapour in atmosphere.

Question 4.
Write a short note on Biosphere.
Answer:
The biosphere is the narrow zone of contact between the land, water and air. This is unique to this planet. Biosphere contain all forms of life. There are several species of organisms that vary in size from microbes and bacteria to huge mammals. All the living organism including humans are linked to each other and to the biosphere for survival.

Question 1.
What do you understand about Atmosphere? State the layers of atmosphere?
Answer:
The Earth is surrounded by a layer of gas called the atmosphere. This thin blanket of air is an integral and important aspect of the planet. It provides us oxygen for breathing and protects us from the harmful effects of the Suns’ rays.

The atmosphere extends up to a height of about 1600 km. The atmosphere is divided into five layers based on composition, temperature and other properties. These layers are – troposphere, stratosphere, mesosphere, thermosphere and exosphere.

We are living in the troposphere. The atmosphere is composed mainly of two gases – Nitrogen and Oxygen which make up 99% of clean, dry air. Nitrogen is 78%, Oxygen 21% and other gases like carbon dioxide, argon and others comprise 1% by volume. The density of the atmosphere varies with height. It is maximum at the sea level and decrease rapidly as we go up.

Question 2.
Give the name of continents and describe them.
Answer:
There are seven major continents. These continents are:
(i) Asia: Asia is the largest continent. It covers about one-third of the total land area of the Earth. The continent lies in the Eastern Hemisphere. The Tropic of Cancer passes through this continent. Asia is separated from Europe by the Ural Mountain on the west.

(ii) Africa: Africa is the second largest continent after Asia. The equator or 0° latitude runs almost through the middle of the continent. A large part of Africa lies in the Northern Hemisphere. It is only continent through which the Tropic of Cancer, the Equator and the Tropic of Capricorn pass. The Sahara Desert, the world’s largest hot desert, is located in Africa. World’s longest river the Nile, flows through Africa.

(iii) North America: North America is the third largest continent of the world. It is linked to South America by a very narrow strip of land called the Isthmus of Panama. The continent lies completely in the Northern and Western Hemisphere. Three oceans that are Pacific Ocean, Atlantic Ocean, and Arctic Ocean are surrounded this continent.

(iv) South America: South America lies mostly in the Southern Hemisphere. Two oceans that are the Pacific and the Atlantic surround it on the east and west respectively. The Andes, world’s longest mountain range, runs through its length from north to south. South America has the world’s largest river, the Amazon.

(v) Europe: Europe is much smaller than Asia. The continent lies to the west of Asia. The Arctic Circle passes through it. It is bound by water bodies on three sides.

(vi) Australia: Australia is the smallest continent that lies entirely in the Southern Hemisphere. It is surrounded on all sides by the oceans and seas. It is called an island continent.

(vii) Antarctica: Antarctica is completely in the Southern Hemisphere, is a huge continent. The South Pole lies almost at the centre of this continent. It is permanently covered with thick ice sheets. There are no permanent human settlements. Many countries have research stations in Antarctica. India also has research stations there. These are named as Maitri and Dakshin Gangotri.

Question 3.
Write a note on Oceans.
Answer:
There are four major oceAnswer:They are – Pacific Ocean, Atlantic Ocean, Indian Ocean and Arctic Ocean. Ocean-wise main features are as under:
(i) The Pacific Ocean: 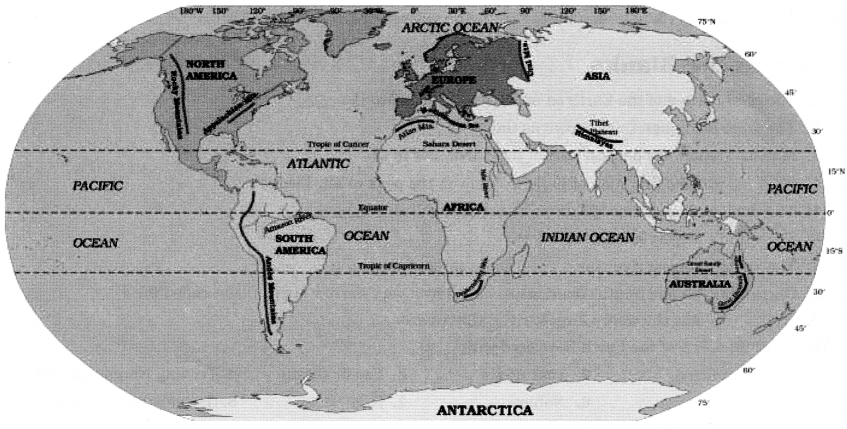