Here we are providing Class 11 chemistry Important Extra Questions and Answers Chapter 4 Chemical Bonding and Molecular Structure. Chemistry Class 11 Important Questions are the best resource for students which helps in Class 11 board exams.

Question 1.
What change in energy takes place when a molecule is formed from its atoms?
Answer:
There is a fall in energy.

Question 5.
Identify the compound/compounds in the following in which S does not obey the Octet rule: SO2, SF2, SF4, SF6.
Answer:
SF4, SF6.

Question 12.
Which type of forces holds the atoms together in an ionic compound?
Answer:
Electrostatic forces of attraction.

Question 14.
Write the Lewis structure of the polyatomic ions CN–, SO42-.
Answer:

Question 18.
Write down the resonance structures of nitrous oxide.
Answer:

Question 19.
Sodium metal vaporizes on heating and the vapors have diatomic molecules of sodium (Na2). What type of bonding is present in these molecules?
Answer:
Covalent.

Question 24.
Define valency.
Answer:
The number of electrons that an atom gains or loses or shares with other atoms to attain noble gas configuration is termed its valency.

Question 26.
MgCl2 is linear, but SnCl2 is angular. Why?
Answer:
MgCl2 has sp hybridization, whereas SnCl2 has sp2 hybridization.

Question 27.
Why CCl4 does not give white precipitates with silver nitrate?
Answer:
CCl4 is a covalent molecule and does not give Cl– ions in solution.

Question 28.
What is the approximate bond strength for an ionic bond?
Answer:
It is about 400 kJ mol-1

Question 29.
What is the approximate bond strength for a covalent bond?
Answer:
It is about 100 kJ mol-1.

Question 30.
Though chlorine has nearly the same electronegativity as nitrogen, yet there is no hydrogen bonding in HCl. Why?
Answer:
The size of the chlorine atom (3 orbits) is bigger than N (2 orbits).

Question 32.
Out of MgO and NaCl which has more lattice energy?
Answer:
MgO.

Question 34.
On what factors the polarity of the bond depends?
Answer:
Difference of electronegativity of the two atoms.

Question 37.
BF3 is non-polar. Why?
Answer:
The dipole moment of BF3 is zero because the BF3 molecule is symmetrical.

Question 38.
What type of bond is formed when atoms have
(i) zero difference of electronegativity
Answer:
Non-polar covalent

Question 39.
What is the state of hybridization of C atoms in
(i) diamond
Answer:
It is sp3 in diamond

(ii) graphite?
Answer:
It is sp2 in graphite.

Question 40.
What type of orbitals can overlap to form a covalent molecule?
Answer:
Half-filled atomic orbitals containing electrons with opposite spins.

Question 41.
Why glucose, fructose, sucrose, etc. are soluble in the water though they are covalent compounds?
Answer:
These compounds contain OH groups which can form H- bonds with water.

Question 42.
What is the shape of NH4+ ion?
Answer:
Due to the sp3 hybridization of N in NH4+, it is tetrahedral in shape.

Question 43.
Both FIF and H2O are associated through hydrogen¬bonding, yet the boiling point of HF is lower than that of HzO. Why?
Answer:
H-bonds formed by H2O are double in number than those formed by HF molecules.

Question 45.
Benzene ring contains alternate single and double bonds, yet all the C-C bonds are of equal length. Why?
Answer:
This is due to resonance in benzene.

Question 46.
When is a molecule paramagnetic in nature?
Answer:
A molecule is paramagnetic when it contains half-filled molecular orbitals.

Question 48.
Explain on the basis of the molecular orbital diagram why O2 should be paramagnetic?
Answer:
O2 molecule contains one unpaired electron in each of one π2px and π2py orbitals.

Question 2.
Define the term chemical bond. What are its different types?
Answer:
The attractive forces which hold the constituent atoms in molecules or species in lattices etc. are called a chemical bond.

They are of the following types:

Question 4.
AlF3 is a high melting solid whereas SiF4 is a gas. Explain why?
Answer:
AlF3 is an ionic solid due to the large difference in electronegativities of Al and F whereas SiF4 is a covalent compound and hence there are only weak van der Waal’s forces among its molecules.

Question 6.
Account for the following: The experimentally determined N-F bond length in NF3 is greater than the sum of the single covalent radii of N and F.
Answer:
This is because both N and F are small and hence have high-electron density. So they repel the bond pairs thereby making the N-F bond length larger.

Question 7.
Explain why the bond angle of NH3 is greater than that of NF3 while the bond angle of PH3 is less than that of. PF3.
Answer:
Both NH3 and NF3 are pyramidal in shape with one lone pair on N. However as F has a higher electronegativity than H, the electron pair is attracted more towards F in NF3, i.e., the bond pairs of electrons are away from N or in other words, the distance between bond pairs is more. Hence the repulsions between bond pairs in NF3 are less than in NH3. Thus the lone pair repels the bond pairs of NF3 more than it does in NH3 As a result the bond angles decrease to 102.4° whereas, in ammonia, it decreases to 107.5° only.

PH3 and PF3 are also pyramidal in shape with one lone pair of P. But PF3 has a greater bond angle than PH3 (opposite to NH3 and NF3). This is due to resonance in PF3 leading to the partial double bond character as shown below

As a result, repulsions between P-F bonds are larger and hence the bond angle is large. There is no possibility for the formation of double bonds in PH3.

Question 8.
Why HCl is polar whereas the Cl2 molecule is non-polar?
Answer:
In Cl2 both atoms have the same electronegativity. Hence the shared pair of electrons is attracted equally by both and remains exactly in the center. NO end acquires a negative or positive charge. In HCl, chlorine is more electronegative than H. Hence shared pair of electrons is more attracted towards chlorine, which, therefore acquires a negative charge while H acquires a positive charge.

Draw a single bond (one shared electron pair) between the nitrogen atom and each of the two oxygen atoms completing the octets on oxygen atoms. This, however, does not complete the octet on Nitrogen if the remaining two electrons, constitute lone pair on it.

Hence we have to resort to multiple bonding between N and one of the oxygen atoms (in this ease a double bond). This leads to the following Lewis dot structures.

In the above structure, an octet of oxygen is not complete. Hence multiple bonding is required between C and O.

Hence we represent O3 along with formal charges as follows.

Question 12.
Describe briefly the limitations of the Octet rule.
Answer:

Question 13.
Explain the structure of the CO2 molecule on the basis of resonance.
Answer:
The experimentally determined C to O bond length in CO2 is 115 pm. The lengths of a normal C to oxygen double bond (C = 0) and carbon, to oxygen triple bond (C ≡ O), are 121 pm and 110 pm respectively. The C-O bond lengths in CO2 (115 pm) lie between the values of C =0 and C-O. Obviously, a single Lewis structure cannot depict this position and it becomes necessary to write more than one Lewis structure.

∴ CO2 is best described as the resonance hybrid of the canonical or resonance forms I, II, and III

As bond lengths are inversely proportional to bond order
∴ Bond lengths will be in order.
C2 > C2– > C22-. 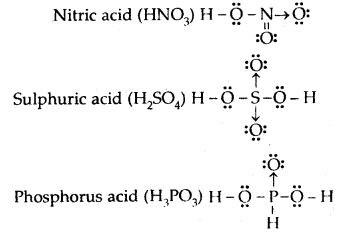 Question 19.
Predict which out of the following molecules will have a higher dipole moment and why? CS2 and OCS.
Answer: 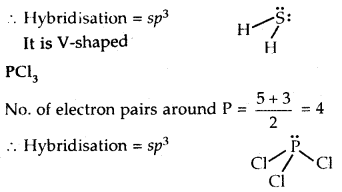 In the solid-state, it has a polymeric structure as follows:

It is possible only due to the sp3 hybrid state of Be. Two half-filled hybrid orbitals will form normal covalent bonds with two Cl atoms. The other two Cl atoms are coordinated to Be atom by donating electron pairs into the empty hybrid orbitals of Be.

Question 25.
BCl3 is planar but anhydrous AlCl3 is tetrahedral. Explain.
Answer:
B atom in BCl3 is sp2 hybridized due to which the shape of BCl3 is triangular planar. Anhydrous AlCl3 exists as a dimer with the formula Al2Cl6.

Thus, each atom of A1 in Al2Cl6 is surrounded by four bond pairs and hence it assumes a tetrahedral structure.

Question 26.
(a) How bond energy varies from N2– to N2+ and why?
Answer:
Both N2– and N2+ is, almost the same [though N2– is slightly less stable and hence has less bond energy than N2+ due to the presence of a greater number of electrons in the antibonding molecular orbitals]

(b) On the basis of molecular orbital theory, what is a similarity between
(i) F2, O2––
Answer:
Both F2 and O2–– have the same bond order = 1 and so the same bond length

Question 28.
Explain giving reasons whether BH4 and H3O+ will have the same/different geometry?
Answer:
The central atom in both the ions is surrounded by the same number of pairs of electrons, that is, 4. Hence they have the same tetrahedral geometry.

Question 29.
State with reasons, which is more polar CO2 or N2O?
Answer:
N2O is more polar than CO2 which is a linear molecule and thus symmetrical. Its net dipole moment is zero.

N2O is linear but unsymmetrical. It is a resonance hybrid of the following canonical structures:

Question 1.
Explain the formation of the following molecules according to the orbital concept, F2, HF, O2, H2O, N2, NH3 molecules.
Answer:
1. Formation of F2 molecule. Atomic number (Z) of fluorine is 9 and its orbital electronic configuration is 1s2 2s2 2p2x, 2p2y, 2p1z. Thus, a fluorine atom has one half-filled atomic orbital. Therefore, two atoms of fluorine combine to form the fluorine molecule as a result of the combination for their half-filled atomic orbitals shown in Fig. The two atoms get linked by a single covalent bond.

2. Formation of HF molecule. Fluorine atom, as stated above, has one half-filled atomic orbital. Hydrogen atom (Z = 1) has only one electron in Is orbital. Thus, the hydrogen fluoride (HF) molecule. is formed as a result of the combination (or overlap) of the half-filled orbitals belonging to the participating atoms.

Formation of O2 molecule
Thus, the two atoms of oxygen are bonded to each other by two covalent bonds or double bonds (O = O). 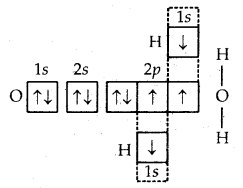 5. Formation of N2 molecule. The atomic number of nitrogen is 7 and its orbital electronic configuration is 1s2 2s2 2p1x 2p1y 2p1 z. This shows that the nitrogen atom has three half-filled atomic orbitals. Two such atoms combine as a result of the overlap of the three half-filled orbitals and a triple bond gets formed (N = N).

So it means hydrogen is acting as a bridge between two molecules by one covalent bond and the other by a hydrogen bond. Due to this hydrogen bonding, HF will not exist as a single molecule but it will exist as an associated molecule (HF)n. So hydrogen bond may be defined as a weak electrostatic bond that binds the hydrogen atom of one molecule and electronegative bond atoms (F, O, N) of the second neighboring molecule.

As both these conditions are satisfied only by F, O, N atoms so only three atoms show hydrogen bond.

Types of H-bonding
There are two types of hydrogen-bonds