Chapter 1 Matter in Our Surroundings Class 9 Science Important Questions with Answers PDF will help you in scoring more marks in your exams.

Question 3:
What is a pure substance ? Give its one characteristic. (CBSE 2011)
Answer:
A pure substance is the one which cannot be separated into smaller parts by any physical methods. It may be either a pure element (e.g. sodium) or a pure compound (e.g. calcium carbonate).

Question 4:
What happens when you pour some acetone on your palm ? (CBSE 2010, 2011)
Answer:
Acetone is a very low boiling liquid. It immediately changes to vapours. The evaporation is an endothermic process. Acetone takes up heat energy from hand. Therefore, the palm immediately becomes cold or even numb.

Question 6:
Give reasons for the following :
(a) Gases fill up completely the vessel in which they are kept.
(b) Gases exert pressure on the walls of the containing vessel. (CBSE 2011, 2012, 2014, 2016)
Answer:
(a) Particles constituting gases are very fast moving and diffuse at a fast speed. They therefore, readily fill up the vessel completely in which these are kept.
(b) Particles of gases collide against the walls of the containing vessel and impart momentum to them. This is responsible for the pressure of the gas.

Question 11:
The temperature-time graph given below shows the heating curve for pure wax. From the graph answer the following : 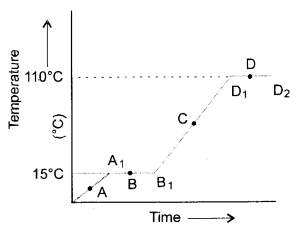 Question 12:
Explain which one will cause more severe burns—boiling water at 100°C or steam at 100°C. (CBSE 2011, 2012)
Answer:
In order to illustrate the particle nature of matter, take some water in a glass beaker. To this add one spoon full of some salt (e.g., sodium chloride) and stir with a glass rod.
The important characteristics of the particulate nature of matter may be summed up as follows :

Question 14:
Flow will you change water from gaseous state to liquid state ? Suggest a simple activity. (CBSE 2011)
Answer:
Pass the water vapours or steam through a water condenser as used in case of simple distillation. It gets condensed to form liquid water.

Question 15:
Justify that melting of wax is a physical change. (CBSE 2011)
Answer:
It can be justified in two ways :

Question 16:
Ramesh took two beakers A and B containing hot water and cold water respectively. In each beaker, he dropped a crystal of copper sulphate. He kept the beakers undisturbed. After sometime what did he observe and why ? (CBSE 2011, 2012)
Answer:
In both the beakers, the solutions became blue. However, this happened at a faster rate in the beaker B which contains hot water. This change has taken place because of the process of diffusion which proceeds at a faster rate in hot water as compared to cold water.

Question 17:
Archit dropped a crystal of potassium permanganate into two beakers A and B containing hot water and cold water respectively. After keeping the beakers undisturbed for some time what did he observe and why ?
(CBSE 2012)
Answer:
Potassium permanganate crystals have purple colour. In a beaker B containing hot water, the purple colour would spread more readily as compared to the beaker A which contains in it cold water. Actually the kinetic energy of the particles increases with the rise in temperature.

Question 19:
(a) 5 mL of water was taken in a test tube and china dish separately. These samples were then kept under different conditions as below :
(i) Both the samples are kept under a fan.
(ii) Both the samples are kept inside a cup board.
State in which case evaporation will be faster ? Give reason to support your answer.
(b) How will the rate of evaporation change if above activity is carried out on a rainy day. Justify your answer.
(CBSE 2012)
Answer:
(a) Evaporation will be faster under a fan. Since fan helps in the fast movement of the air, water will get more opportunity to evaporate under a fan than inside a cup board. In this case, the outside air will not come in contact with water.
(b) On a rainy day, there is humidity in air. As a result, evaporation of water will slow down.

Question 22:
State one similarity and two differences between boiling and evaporation. (CBSE 2012, 2014, 2015)
Answer:
Similarity : In both evaporation and boiling, liquid changes to vapour state.
Differences :

Question 23:
Draw a flow sheet diagram to illustrate interconversion of three states of matter. Name the process of each interconversion. (CBSE 2012)
Answer:
It is because of the change in interparticle spaces and inter particle forces. If a solid is to be converted into liquid, the interparticle spaces have to be increased. Similarly, if a liquid is to change to the gas, these spaces have to be further increased. 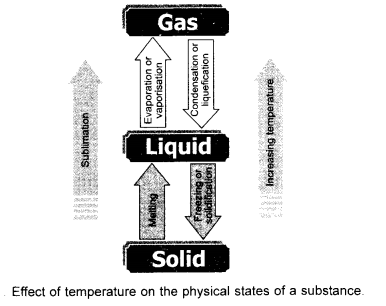 In other words, we can say that one state of a substance can be converted into the other by changing interparticle spaces.They actually change interparticle forces of attraction. Please note that the process can be reversed also under suitable conditions. This is known as interconversion of states of matter. The obvious question which strikes the minds of everybody is to how to bring about the change of state. There are two ways to achieve this.
By changing the temperature
By changing thé pressure.

Question 26:
List any two properties of liquids which are common to gases. (CBSE 2013)
Answer:

Question 28:
To which physical state of matter, do the following statements apply ? (CBSE 2013)

Question 29:
A drop of ink and a drop of honey are placed in watel in different beakers. Which of the two will spread faster ? Give reason for your answer. (CBSE 2013)
Answer:
Ink drop will spread faster as compared to honey. The density of honey is more than that of ink. Therefore, particles in ink diffuse faster as compared to the particles in honey.

The temperature would remain zero degree till the whole of ice has melted. Further heating would increase the temperature of water till it starts boiling at 100°C. The curve (d) gives the correct representaton.

Question 33:
Describe an activity to show that particles of matter have spaces between them. (CBSE 2014, 2015)
Answer:
The important characteristics of the particulate nature of matter may be summed up as follows :

Question 34:
How will you separate a mixture of naphthalene balls powder and common salt ? Draw a neat and labelled diagram to show the process. (CBSE 2015)
Answer:
We have so far studied that upon heating, a solid initially changes to the liquid state and then to the gaseous state when the temperature is increased. The process or the change of state can be reversed when the temperature is decreased. However, there are some exceptions. Certain solids directly change to the gaseous state upon heating without passing through the liquid state. This is called sublimation. The substance obtained on cooling the vapours is known as sublimate. Sublimation may be defined as :
the change of solid directly into the gaseous state without passing through the liquid state upon heating. 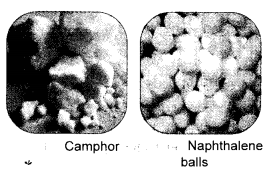 Naphthalene balls, camphor, iodine, ammonium chloride are some common examples of the substances which undergo sublimation.

Question 36:
(a) Define the process of vaporisation.
(b) List four factors which affect the rate of evaporation. (CBSE 2015)
Answer:
(a) vaporisation and may be defined as the amount of heat energy that is needed to convert one kg of a liquid at its boiling point temperature into its vapour state without any rise in temperature.
Latent heat of vaporisation of water is 226 kj kg-1. It is the amount of heat that is absorbed when one kilogram of water at its boiling point temperature (100°C) changes to vapour state without any further rise in temperature.
(b)

Question 38:
Why does perspiration keep our body cool ? (CBSE 2015)
Answer:
Actually, we perspire a lot in the hot and humid weather. Since cooling is caused during evaporation, the body temperature gets lowered. We feel more comfortable. Now, cotton is of porous nature and is a good absorber of water coming out of the pores as sweat. The synthetic clothes are less porous and donot absorb sweat so quickly. As the sweat evaporates, it absorbs some energy from the body since the clothes are in contact with our skin. The temperature of the body gets lowered and we feel more comfortable. We feel less comfortable in nylon and terylene clothes during summer.

Question 40:
Give reasons for the following observations

Question 41:
(a) When common salt is added to water, will there be any change in volume ? Give reason.
(b) Write any one similarity between three states of matter. (CBSE 2015, 2016)
Answer:
(a) No, there will be no change in volume. The particles of common salt will occupy inter particle empty spaces present in the molecules of water. The salt will dissolve in water and there will not be any change in the level of the solution thus formed.
(b) All the three states of matter consist of particles which have specific mass.

Question 42:
Out of boiling and evaporation, which is a surface phenomenon ? Explain. (CBSE 2015)
Answer:
Evaporation is a surface whereas boiling once started occurs throughout the liquid. In a liquid, the particles or molecules experience mutual forces of attraction. However, these are not stationary and have some kinetic energy at all temperatures. The particles of a liquid are also colliding with one another and exchanging energy during the collisions. Above the liquid surface, atmosphere or air is present which is a mixture of several gases. The particles of the liquid present on the surface have a tendency to come out from the surface so that they may acquire more freedom to move and become part of the atmosphere. This is also known as randomness. To overcome the interparticle forces of attraction, they need some energy which they take up from the rest of the particles or molecules of the liquid. As a result, their temperature gets lowered and cooling is caused.

Question 44:
Liquids and gases are commonly known as fluids. Compare their properties and show that they can flow easily.
(CBSE 2016)
Answer:
Unlike solids, the liquids have fluidity and not rigidity i.e., they have tendency to flow. This is due to lesser interparticle or intermolecular forces that are present in the liquid state as compared to the solid state. However, the liquids differ in their relative fluidity. For example, water flows at a faster rate than honey because in honey, the particles are heavier and also more closely packed.
Gases have maximum fluidity and least rigidity.
Since the interparticle spaces are the maximum in the gaseous state, the attractive forces are the least. As a result, the fluidity is very large while rigidity is negligible.

Question 45:
Tabulate the differences in the states of matter on the basis of the following characteristics :

Hope given Previous Year Question Papers for CBSE Class 9 Science Chapter 1 Matter in Our Surroundings are helpful to complete your science homework.