Chapter 3 Atoms and Molecules Class 9 Science Important Questions with Answers PDF will help you in scoring more marks in your exams.

Question 1.
What is cation ? Give one example.
Answer:
A cation is an atom or group of atoms carrying positive charge on it.

Question 3.
Name the compound Al2(SO4), and mention the ions present in it.
Answer:
The compound is called aluminium sulphate; cation : Al3+ ; anion : (SO4)2-

Question 6.
With the help of a labelled diagram describe an activity to demonstrate the law of conservation of mass.
(CBSE 2011)
Answer:
In order to illustrate the law of conservation of mass, let us carry the same chemical reaction in the laboratory. The procedure is quite simple. In a graduated cylinder, prepare about 10% solution of one of the reactants say barium chloride in water. For that, weigh accurately 10 gram of the sample and dissolve in water with stirring in the graduated cylinder. Add more of water so as to touch 100 mL mark. This is 10 percent solution of the reactant. Transfer a portion of this solution in a conical flask as shown in figure 3.1. 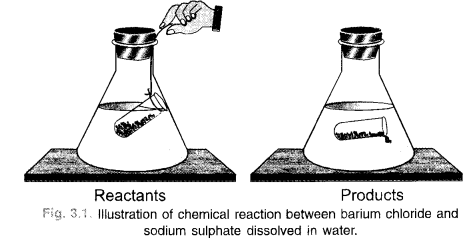 In a similar manner, prepare 10% solution of sodium sulphate also. Take a portion of this solution in a small glass tube. Place the tube carefully in the flask without disturbing it. Even a thread can be used for the purpose. Cork the flask and weigh it on a balance. Shake the flask for sometime by hand so that the two reactants mix together and react to form the products. Barium sulphate is in the form of a white precipitate. The other product sodium chloride is water soluble. Weigh the flask again and notice if there is any change in weight. No change will be noticed. This means that the mass of reactants is the same as the mass of the products and this verifies the law of conservation of mass.

Question 13.
Name the cation and anion which constitute the molecule of magnesium oxide. (CBSE 2012)
Answer:
The formula of magnesium oxide is MgO. The cation and anions which constitute the molecule are Mg2+ and O2- ions.
The percentage of three elements calcium , carbon and oxygen in a sample of calcium carbonate is given as : Calcium = 40% ; Carbon = 12.0% ; Oxygen = 48%

Question 14.
If the law of constant proportion is true, what weights of these elements will be present in 1.5 g of another sample of calcium. Carbonate ?
(Atomic mass of Ca = 40 u, C = 12 u, O = 16 u). (CBSE 2012)
Answer:
We have learnt that according to the law of constant proportions, the percentages of the elements present in different samples of a pure substance always remain the same. This means that in the second sample of calcium carbonate, the ratio of the different elements present will remain the same or will remain unchanged. Thus,

Question 15.
An element has valency 3. Write the formula of its oxide. (CBSE 2012)
Answer:
The valency of oxygen is 2 while that of element E is 3. The formula of the oxide of the element is : E2O3.

Question 17.
(a) State six postulates of Dalton’s atomic theory.
(b) A 0.24 g sample of compound of carbon and oxygen on analysis was found to contain 0.096 g of carbon and 0.144 g of oxygen. Find the percentage composition of the compound by weight. (CBSE 2012)
Answer:
(a) The important features of the Dalton’s Atomic Theory are listed : 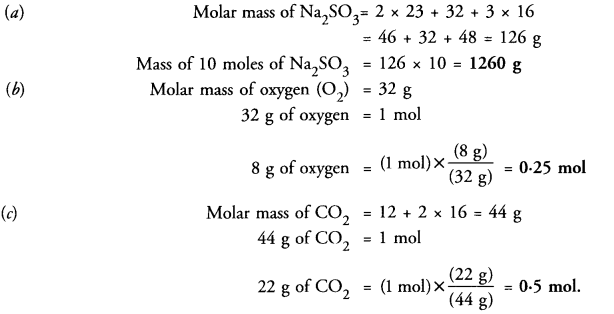 Question 22.
How are given mass, molar mass and number of moles related to each other ? (CBSE 2013)
Answer:
No. of moles = Mass/Molar mass.

Question 26.
What are chemical reactions according to the Law of conservation of mass ? (CBSE 2013)

Answer:
According to law of conservation of mass, chemical reactions involve only the exchange of partners in the reactants to form products. That is why, there is no change in mass.

Question 31.
Calculate the number of molecules of SO2 present in 44 g of it.
Answer:

Question 33.
Write the formula and names of the compounds formed by the following ions.
(a) Potassium ion and iodide ion.
(b) Sodium ion and sulphide ion.
(c) Aluminium ion and phosphate ion.
Answer:
The compounds are :
(a) KI (Potassium iodide)
(b) Na2S (Sodium sulphide)
(c) AlPO4  (Aluminium phosphate)

Question 35.
Calculate the number of molecules of sulphur (S8) present in 128 g of sulphur.
Answer:

Question 38.
In a chemical reaction, 10.6 g of sodium carbonate reacted with 12 g of ethanoic acid. The products obtained were 4.4 g of carbon dioxide, 16.4 g of sodium ethanoate and 1.8 g of water.
(a) Write a word equation, clearly showing the reactants and products as given above.
(b) Also show that this data is in agreement with the law of conservation of mass. (CBSE 2015)
Answer:
(a) The word equation for the chemical reaction is :

Question 41.
How did Berzelius assign symbols to the elements ? (CBSE 2016)
Answer: 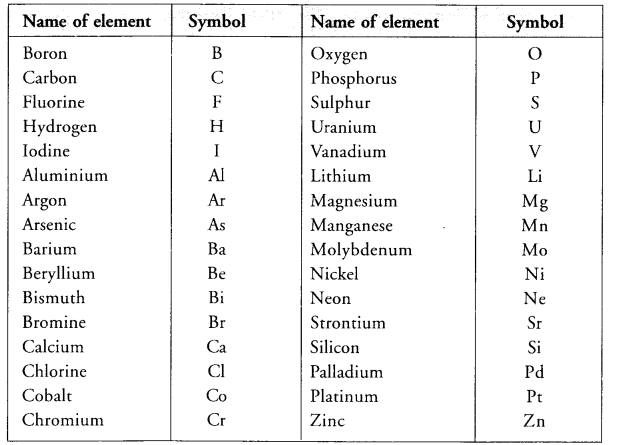 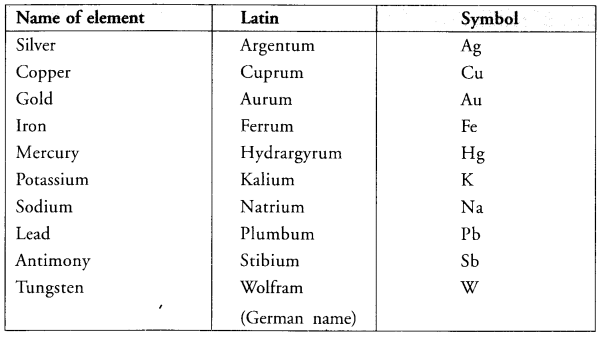