Question 3.
Name the hardest substance which is an allotrope of carbon.
Answer:
Diamond.

Question 4.
Name the allotrope of carbon which have the structure of C-60.
Answer:
Fullerenes.

5. Name the unique ability of carbon to form bonds with other atoms of carbon.
Answer:
Catenation.

Question 10.
Identify the functional group present in the following compound:

Question 11.
How many covalent bonds are there in a molecule of ethane, C2H6?
Answer:
Seven (7)

Question 12.
Draw the structure of the hexanal molecule, C5H11CHO.
Answer:

Question 16.
Which property of ethanol makes it suitable for preparing medicines such as tincture iodine, cough syrup and other tonics?
Answer:
Ethanol is a good solvent.

Question 17.
What is the function of cone. H2SO4 in the formation of ethene from ethanol?
Answer:
Dehydrating agent

Question 18.
Name the alcohol which is an active ingredient of all alcoholic drinks.
Answer:
Ethanol or ethyl alcohol (C2H5OH)

Question 24.
A neutral organic compound is warmed with some ethanoic acid and a little cone. H2SO4. Vapours having sweet smell or fruity smell are observed. Identify the functional group present in the organic compound.
Answer:

Question 26.
Write the formula and name of next homologue of CH3COCH3.
Answer:
CH3CH2COCH3, Butanone. 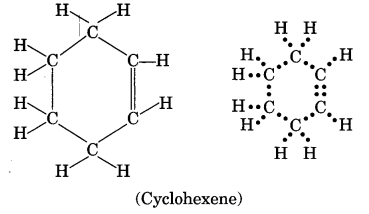 Propane is a gas.

Octane is a liquid

Question 6.
Why does carbon form compounds mainly by covalent bonding?
Answer:
Carbon atoms have 4 valence electrons in their valence shell, it needs to gain or lose 4 electrons to attain the noble gas configuration.

(i) It could gain four electrons forming C4- anion. But it would be difficult for the nucleus with six protons to hold on to ten electrons.

(ii) It could lose four electrons forming C4+ cation. But it would require a large amount of energy to remove four electrons from its outermost shell.
Therefore, carbon shares its valence electrons to complete its octet with other atoms to form covalent bonds.

Question 8.
Draw the structures of diamond and graphite.
Answer:
In diamond, each carbon atom is bonded to four other carbon atoms forming a rigid three dimensional structure.

In graphite, each carbon atom is bonded to three other carbon atoms in the same plane giving a hexagonal array. One of these bonds is a double bond. 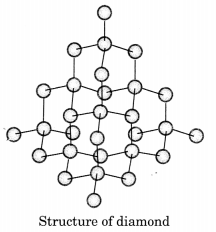 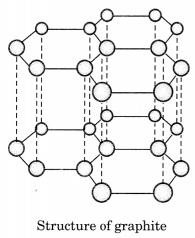 Question 10.
Ethane , Ethene, Ethanoic acid, Ethyne, Ethanol
From the box given above, name:
(i) The compound with —OH as a part of its structure.
(ii) The compound with —COOH as a part of its structure.
(iii) Gas used in welding.
(iv) Homologue of the homologous series with general formula CnH2n+2.
Answer:
(i) Ethanol
(ii) Ethanoic acid
(iii) Ethyne
(iv) Ethane

Question 13.
What are substitution reactions? Justify your answer with a suitable example.
Answer:
A chemical reaction in which atom(s) or group of atoms of an organic compound is/are replaced by other atom(s) or group of atoms without any change in the rest of the molecule is called a substitution reaction.
For example,
CH4 + Cl2 → CH3Cl + HCl
In this chemical reaction Cl atom substitutes one hydrogen atom from methane.

Question 14.
Give any four uses of ethanoic acid.
Answer:

Question 1.
What is the role of metal or reagents written on arrow’s in the given chemical reactions?

Question 2.
The molecular formula of an organic compound X is C2H4O2 which has vinegar like smell.
(i) Identify the compound.
(ii) Write its chemical formula and name.
(iii) What happens when sodium bicarbonate is added into it?
Answer:
(i) The organic compound X is acetic acid.
(ii) Chemical formula: CH3COOH
IUPAC name: Ethanoic acid
(iii) Ethanoic acid produces effervescence with sodium bicarbonate liberating carbon dioxide gas.

Question 3.
Write one chemical equation to represent each of the following types of reactions of organic substances.
(a) Esterification
(b) Saponification
(c) Substitution   [CBSE 2011]
Answer:
(a) Esterification. Ethanol reacts with ethanoic acid on warming in presence of a few drops of conc. H2SO4 to form a sweet smelling ester, ethyl ethanoate.

(b) Saponification. The alkaline hydrolysis of esters is known as saponification as this reaction is used for the preparation of soaps.

(c) Substitution. The reaction, in which one (or more) hydrogen atoms of a hydrocarbon are replaced by some other atoms, is called substitution reaction.

Question 6.
(a) Differentiate between alkanes and alkenes. Name and draw the structure of one member of each.  [CBSE 2013]
(b) Alkanes generally burn with clean flame. Why?
Answer:
Alkanes:

(b) Alkanes burn in air with a blue and non-sooty flame because the percentage of carbon in the alkane is comparatively low which gets oxidised completely by oxygen present in air.

Question 8.
What is meant by homologous series of carbon compounds? Write the general formula of
(i) alkenes, and
(ii) alkynes. Draw the structures of the first member of each series to show the bonding between the two carbon atoms.   [CBSE 2014]
Answer:
Homologous series:
A series of carbon compounds in which the same functional group substitutes for hydrogen on a carbon chain is called a homologous series. There is a difference of –CH2 in the molecular formulae of two nearest compounds of a homologous series. Each such series has same general molecular formula and has a general scientific name. There is a difference of 14 u (unified mass) in the molecular masses of two nearest compounds of a series.

Essential conditions for the reaction are:

Question 10.
The list of some organic compounds is given below:
Ethanol, ethane, methanol, methane, ethyne, ethene
From the above list, name a compound:
(i) formed by the dehydration of ethanol by conc. H2SO4.
(ii) which will give red precipitate with ammoniacal cuprous chloride solutions,
(iii) which forms ethanoic acid on oxidation with KMnO4.
(iv ) which has vapour density 14 and decolourises pink alkaline potassium permanganate.
(v) which forms chloroform on halogenation in the presence of sunlight.
(vi) which decolourises bromine solution in carbon tetrachloride.
Answer:
(i) Ethene
(ii) Ethyne
(iii) Ethanol
(iv) Ethene
(v) Methane
(vi) Ethene

Question 12.
Copy and complete the following table which relates to three homologous series of hydrocarbons:

(b) Saturated compounds are saturated by means of number of bonds or they contains only single bonds. For example,
CH3—CH3 (ethane), CH3CH2CH3 (propane)
Unsaturated hydrocarbon contains multiple bonds (C=C or C≡C)
For example, CH≡CH (ethyne) and CH2=CH2 (ethene).

(c) Functional group is an atom or group of atoms which imparts certain characteristic properties to the organic compound.

Question 3.
(a) Distinguish between esterification and saponification reactions of organic compounds.
(b) With a labelled diagram describe an activity to show the formation of an ester.
Answer:
(a) Esterification:
When carboxylic acid reacts with alcohol in the presence of a little concentrated sulphuric acid to form ester, the reaction is called esterification.

Saponification:
When an ester is heated with sodium hydroxide solution then the esters get hydrolysed to form alcohol and sodium salt of carboxylic acid. This alkaline hydrolysis of esters is known as saponification as it is used in the preparation of soap.

(b) Activity to show the formation of an ester: 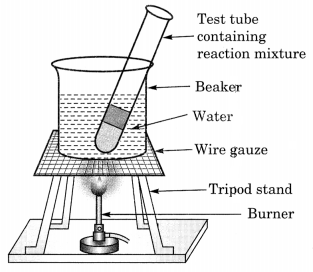 Question 4.
List in tabular form three physical and two chemical properties on the basis of which ethanol and ethanoic acid can be differentiated.   (CBSE 2012)
Answer: 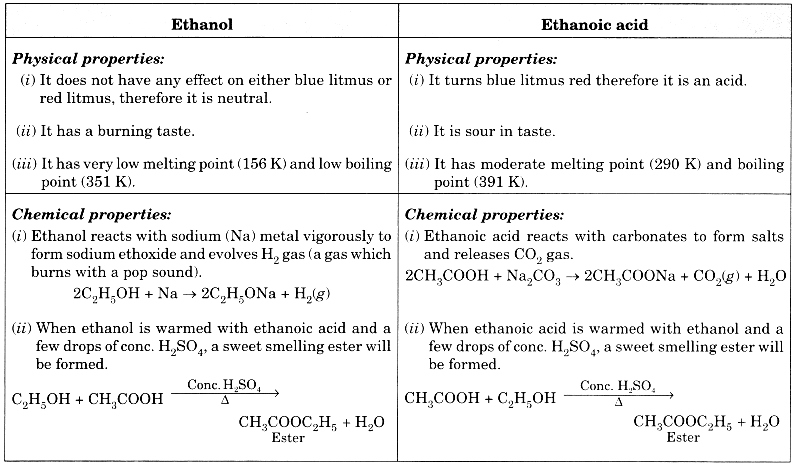 Carbon and its Compounds HOTS Questions With Answers

Question 2.
Carbon, Group (14) element in the Periodic Table, is known to form compounds with many elements.
Write an example of a compound formed with
(a) chlorine (Group 17 of Periodic Table)
(b) oxygen (Group 16 of Periodic Table)  (NCERT Exemplar)
Answer:
(a) Carbon tetrachloride (CCl4)
(b) Carbon dioxide (CO2)

Question 3.
A salt X is formed and a gas is evolved when ethanoic acid reacts with sodium hydrogen carbonate. Name the salt X and the gas evolved. Describe an activity and draw the diagram of the apparatus to prove that the evolved gas is the one which you have named. Also, write chemical equation of the reaction involved.   (NCERT Exemplar)
Answer: 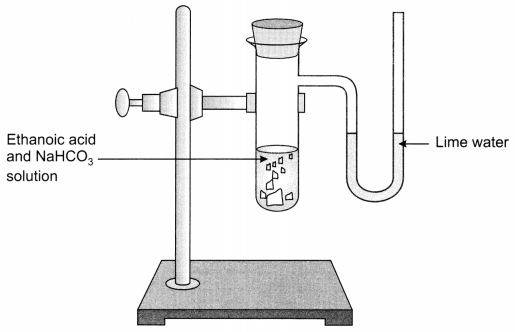 Question 4.
A compound C (molecular formula, C2H4O2) reacts with Na metal to form a compound R and evolves a gas which bums with a pop up sound. Compound C on treatment with an alcohol A in presence of an acid forms a sweet smelling compound S (molecular formula, C3H6O2). On addition of NaOH to C, it also gives R and water. S on treatment with NaOH solution gives back R and A.
Identify C, R, A, S and write down the reactions involved.   (NCERT Exemplar)
Answer:
C – Ethanoic acid
R – Sodium salt of ethanoic acid (sodium acetate) and gas evolved is hydrogen
A – Methanol
S – Ester (Methyl acetate)

Question 5.
Look at figure given on the next page and answer the following questions:
(a) What change would you observe in calcium hydroxide solution taken in test tube B?
(b) Write the reaction involved in test tubes A and B respectively.
(c) If ethanol is given instead of ethanoic acid, would you expect the same change?
(d) How can a solution of lime water be prepared in the laboratory?   (NCERT Exemplar) 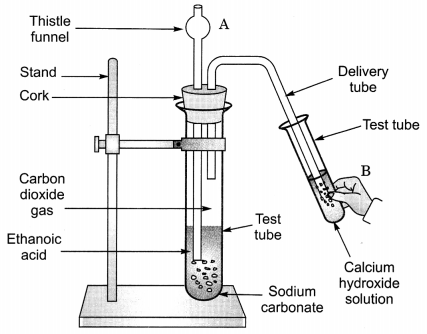 Answer:
(a) It will become milky.

(b) In test tube A, ethanoic acid react with sodium carbonate to form sodium ethanoate along with carbon dioxide. The gas is evolved accompanied by brisk effervescence.
CH3COOH + Na2CO3 → CH3COONa + CO2 + H2O

(c) No, it would be different. No chemical reaction is possible between ethanol and sodium carbonate.

Question 6.
An organic compound A on heating with concentrated H2SO4 forms a compound B which on addition of one mole of hydrogen in presence of Ni forms a compound C. One mole of compound C on combustion forms two moles of CO2 and 3 moles of H2O. Identify the compounds A, B and C and write the chemical equations of the reactions involved.  (NCERT Exemplar)
Answer:
Since compound C gives 2 moles of CO2 and 3 moles of H2O, it shows that it has the molecular formula C2H6 (ethane). C is obtained by the addition of one mole of hydrogen to compound B, so the molecular formula of B should be C2H4 (ethene). Compound B is obtained by heating compound A with concentrated H2SO4 which shows it to be an alcohol. So compound A could be C2H5OH (Ethanol).

Question 1.
Ethanol is one of the most important industrial chemicals. It is used in medicine, to synthesise many important compounds and as an excellent solvent.
However, inspite of its benefits it causes many social problems. If a person drinks alcohol regularly, he becomes an alcoholic. Alcohol is non-toxic but it produces physiological effects disturbing brain activity. These persons are also a threat to the lives of others.
(a) Give three reasons in favour and three reasons against ‘alcohol-free world’.
(b) ‘Alcohol drinking should not be portrayed on media’. Give valid reasons to justify.
(c) As a student what initiative would you take in the concern of “We should condemn drinking alcohol”,
Answer:
(a) In favour of‘Alcohol-free world’:

(b) ‘Alcohol drinking should not be portrayed on media’ because young people and children are greatly influenced by the media.

(c) Initiatives taken by a student to create awareness about drinking alcohol could be:

Question 2.
Intake of small quantity of methanol can be lethal. Comment.  (NCERT Exemplar)
Answer:
Methanol is oxidised to methanal in the liver. Methanal reacts with the component of the cells. It causes the protoplasm to coagulate. It also affect the optic nerve, due to which it causes blindness.