Hormone is an organic substance (e.g. a peptide or a steroid) that is secreted by one tissue. it limits the blood stream and induces a physiological response (e.g. growth and metabolism) in other tissues. It is an intercellular signalling molecule.

Virtually every process in a complex organism is regulated by one or more hormones: maintenance of blood pressure, blood volume and electrolyte balance, embryogenesis, hunger, eating behaviour, digestion – to name but a few.

Endocrine glands, which are special groups of cells, make hormones. The major endocrine glands are the pituitary, pineal, thymus, thyroid, adrenal glands, and pancreas. In addition, men produce hormones in their testes and women produce them in their ovary.

Chemically, hormones may be classified as either protein (e.g. insulin, epinephrine) or steroids (e.g. estrogen, androgen). Hormones are classified according to the distance over which they act as, endocrine, paracrine and autocrine hormones.

Endocrine hormones act on cells distant from the site of their release. Example: insulin and epinephrine are synthesized and released in the bloodstream by specialized ductless endocrine glands.

Paracrine hormones (alternatively, local mediators) act only on cells close to the cell that released them. For example, interleukin-1 (IL-1). 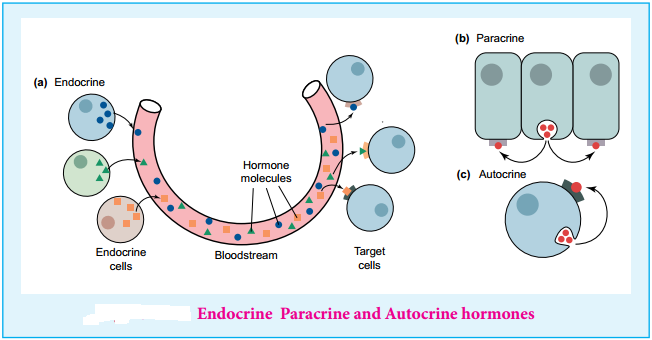 Only those cells with a specific receptor for a given hormone will respond to its presence even though nearly all cells in the body may be exposed to the hormone. Hormonal messages are therefore quite specifically addressed.

Most commonly, hormones are categorized into four structural groups, with members of each group having many properties in common:

Some hormones that are products of endocrine glands are proteins or peptides, others are steroids. (The origin of hormones, their physiological role, and their mode of action are dealt with in the article hormone). None of the hormones has any enzymatic activity.

Some examples of protein hormones include growth hormone, which is produced by the pituitary gland, and follicle-stimulating hormone (FSH), which has an attached carbohydrate group and is thus classified as a glycoprotein.

Chemically, hormones may be classified as either proteins or steroids. All of the hormones in the human body, except the sex hormones and those from the adrenal cortex, are proteins or protein derivatives.