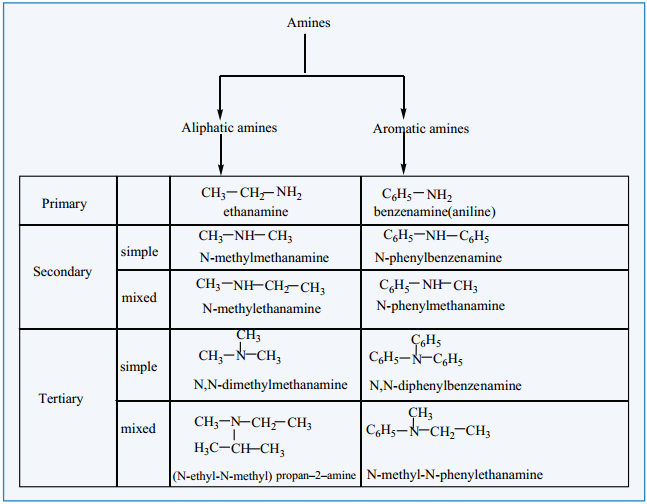 In common system, an aliphatic amine is named by prefixing alkyl group to amine. The prefixes di-,tri-, and tetra-, are used to describe two, three (or) four same substituent’s.

Aliphatic and aromatic amines are prepared by the following methods.

(a) Reduction of alkyl or aryl cyanides with H2/Ni (or) LiAlH4 (or) Na/C2H5OH gives primary amines. The reduction reaction in which Na/C2H5OH is used as a reducing agent is called mendius reaction.

(a) Reduction of amides with LiAlH4 gives amines

When Amides are treated with bromine in the presence of aqueous or ethanolic solution of KOH, primary amines with one carbon atom less than the parent amides are obtained.

Gabriel synthesis is used for the preparation of Aliphatic primary amines. Phthalimide on treatment with ethanolic KOH forms potassium salt of phthalimide which on heating with alkyl halide followed by alkaline hydrolysis gives primary amine. Aniline cannot be prepared by this method because the arylhalides do not undergo nucleophilic substitution with the anion formed by phthalimide.

When Alkyl halides (or) benzylhalides are heated with alcoholic ammonia in a sealed tube, mixtures of 1°, 2° and 3° amines and quaternary ammonium salts are obtained.

This is a nucleophilic substitution, the halide ion of alkyl halide is substituted by the – NH2 group. The product primary amine so formed can also has a tendency to act as a nucleophile and hence if excess alkyl halide is taken, further nucleophilic substitution takes place leading to the formation of quarternary ammonium salt. However, if the process is carried out with excess ammonia, primary amine is obtained as the major product.

The order of reactivity of alkylhalides with amines.

(c) Alkyl halide can also be converted to primary amine by treating it with sodium azide (NaN3) followed by the reduction using lithium aluminium hydride.

(d) Preparation of Aniline from Chlorobenzene

When chlorobenzene is heated with alcoholic ammonia, aniline is obtained.

(a) when vapour of an alcohol and ammonia are passed over alumina, W2O5 (or) silica at 400°C, all types of
amines are formed. This method is called Sabatier – Mailhe method.

The lower aliphatic amines (C1 – C2) are colourless gases and have ammonia like smell and those with four or
more carbons are volatile liquids with fish like smell. Aniline and other arylamines are usually colourless but when exposed to air they become coloured due to oxidation.

Due to the polar nature of primary and secondary amines, can form intermolecular hydrogen bonds using their lone pair of electorn on nitrogen atom. There is no such H-bonding in tertiary amines.

The boiling point of various amines follows the order,

Amines have lower boiling point than alcohols because nitrogen has lower electronegative value than oxygen and hence the N-H bond is less polar than -OH bond.

Lower aliphatic amines are soluble in water, because they can form hydrogen bonds with water molecules. However, solubility decreases with increase in molecular mass of amines due to increase in size of the hydrophobic alkyl group. Amines are insoluble in water but readily soluble in organic solvents like benzene, ether etc.

The lone pair of electrons on nitrogen atom in amines makes them basic as well as nucleophilic. They react with acids to form salts and also react with electrophiles. They form salts with mineral acids

Expression for Basic Strength of Amines

In the aqueous solutions, the following equilibrium exists and it lies far to the left hence amines are weak bases compared to NaOH.

The basicity constant Kb gives a measure of the extent to which the amine accepts the hydrogen ion (H+) from water, we know that,

Table: pKb values of Amines in Aqueous solution. (pKb for NH3 is 4.74)

Influence of Structure on Basic Character of Amines

(a) Hence alkyl amines are stronger bases than ammonia. 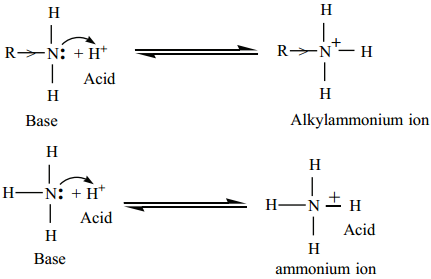 and provide unshared electron pair more available for sharing with proton. Therefore, the expected order of basicity of aliphatic amines (in gas phase) is

The above order is not regular in their aqueous solution as evident by their pKb values given in the table.

To compare the basicity of amines, the inductive effect, solvation effect, steric hindrance, etc., should be taken into consideration.

In the aqueous solution, the substituted ammonium cations get stabilized not only by electron releasing (+I) effect of the alkyl group but also by solvation with water molecules. The greater the size of the ion, lesser will be the solvation.

The resultant of +I effect, steric effect and hydration effect cause the 2° amine, more basic.

In aniline, the NH2 group is directly attached to the benzene ring. The lone pair of electron on nitrogen atom in aniline gets delocalised over the benzene ring and hence it is less available for protonation makes the, aromatic amines (aniline) less basic than NH3.

Table pKb’s of substituted anilines (pKb value of aniline is 9.376)

The relative basicity of amines follows the below mentioned order

Amines reacts with alkyl halides to give successively 2° and 3° amines and quaternary ammonium salts.

Aniline reacts with benzoylchloride (C6H5COCl) in the presence of NaOH to give N – phenyl benzamide. This reaction is known as Schotten – Baumann reaction. The acylation and benzoylation are nucleophilic substitutions.

Three classes of amines react differently with nitrous acid which is prepared in situ from a mixture of NaNO2 and HCl.

(i) Ethylamine reacts with nitrous acid to give ethyl diazonium chloride, which is unstable and it is converted to ethanol by liberating N2.

(ii) Aniline reacts with nitrous acid at low temperature (273 – 278 K) to give benzene diazonium chloride which is stable for a short time and slowly decomposes even at low temperatures. This reaction is known as diazotization.

Alkyl and aryl secondary amines react with nitrous acid to give N – nitroso amine as yellow oily liquid which is insoluble in water.

This reaction is known as Libermann’s nitroso test,

(i) Aliphatic tertiary amine reacts with nitrous acid to form trialkyl ammonium nitrite salt, which is soluble in water.

Aliphatic (or) aromatic primary amines react with chloroform and alcoholic KOH to give isocyanides (carbylamines), which has an unpleasant smell. This reaction is known as carbylamine test. This test used to identify the primary amines.

(i) When primary amines are treated with carbon disulphide (CS2), N – alkyldithio carbomic acid is formed which on subsequent treatment with HgCl2, give an alkyl isothiocyanate.

(ii) When aniline is treated with carbon disulphide, or heated together, S-diphenylthio urea is formed, which on boiling with strong HCl, phenyl isothiocyanate (phenyl mustard oil), is formed.

These reactions are known as Hofmann – Mustard oil reaction. This test is used to identify the primary amines.

Aniline reacts with Br2/H2O to give 2, 4, 6 – tribromo aniline a white precipitate.

To get mono bromo compounds, – NH2 is first acylated to reduce its activity.

When aniline is acylated, the lone pair of electron on nitrogen is delocalised by the neighbouring carbonyl group by resonance. Hence it is not easily available for conjugation with benzene ring.

The acetylamino group is thus less activating than the amino group in electrophilic substitution reaction.

Direct nitration of aniline gives o and p – nitro aniline along with dark coloured ‘tars’ due to oxidation. Moreover in a strong acid medium aniline is protonated to form anilinium ion which is m – directing and hence m – nitro aniline is also formed.

To get para product, the – NH2 group is protected by acetylation with acetic anhydride. Then, the nitrated product is hydrolysed to form the product.

It does not under go Friedel – Crafts reaction (alkylation and acetylation) we know aniline is basic in nature and it donates its lone pair to the lewis acid AlCl3 to form an adduct which inhibits further the electrophilic substitution reaction.